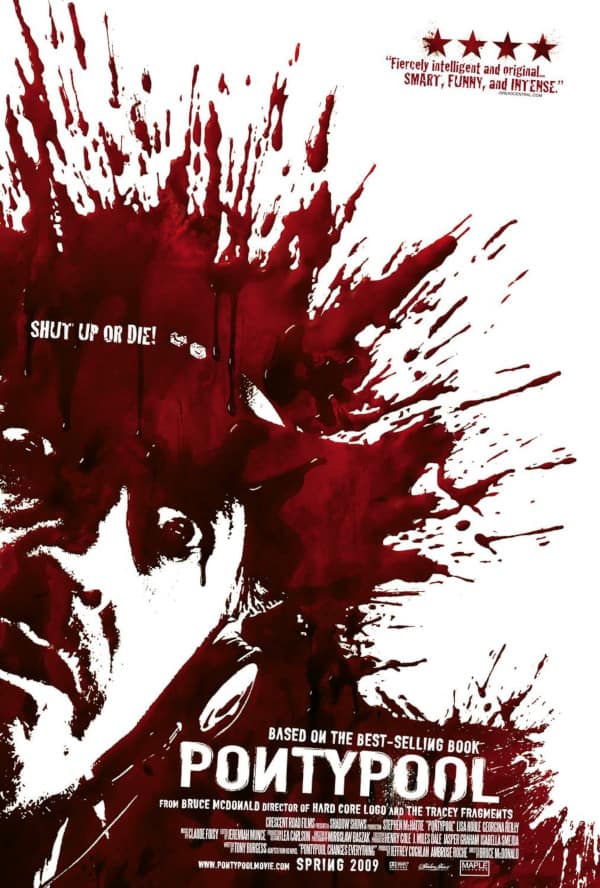 A radio host and his crew broadcast the rampage of marauding infected folks in rural Ontario, Canada, in the "War of the Worlds" radio show-inspired "Pontypool" starring Stephen McHattie and Lisa Houle.

Hey, it’s the end of 2020 and the acid bath of social media has disintegrated the entire concept of what’s factual, what’s supposition, what’s opinion and everything else in between. It’s all just there. A whole bunch of eyeballs looking at screens attached to minds willing (or unwilling) to see and accept what’s happening. (Or not). Just scroll a bit further and something will pop up out of the soup. It always does.

Facts are facts, except when they aren’t these days, and if someone disagrees with something, there’s no need to process any oppositional view for even a second because there are other folks who think the exact same thing — like Fox Mulder would say — the correct link is out there. If things get too uncomfortable when engaging with others and the reality OUT THERE doesn’t match the carefully crafted one that’s been constructed inside one’s cranium, all that needs to be done to end the conversation is to type out two words in the comments below:

People have been using that one A LOT on social media. This isn’t the place for me to go into analyzing whether there’s a big media conspiracy going on or to point the finger on whether a particular political/social/ethnic/economic group uses that term more than another.

However, I am going to say that whatever “Fake News” that we have now isn’t even close to the highest-quality example that ever happened in this country, even though the rate of exposure these days is proportional to our screen time and the potential for getting things wrong (which is not the same thing as being “fake”) is increased as the number of trained journalists working at independent local media outlets dwindles.

The BESTEST EXAMPLE happened about 82 years ago in October 1938 when a guy named Orson Welles who led both a theater troupe and a radio troupe at the same time got folks to think that Martians were frying people in New Jersey in a radio dramatization of War of the Worlds.

The broadcast went the 1938 equivalent of viral. Some people panicked (maybe a bunch, maybe a few), newspapers ran front-page stories (maybe to discredit their media competitors, maybe to report what happened) and Welles had to apologize the next day on Halloween 1938 for the possible panic he may or may not have intended to cause.

(To his defense, the discerning listener would have recognized that if the show had been a news broadcast, they wouldn’t have interrupted it with cigarette ads. But then again, the normally discerning listener might have been so worried about packing their dang suitcase and heading for the hills before being fried by a Martian heat ray or poisoned by Martian black smoke, it might be understandable if they were not completely focused).

Mr. Welles did fairly well upon going Hollywood and one of his better later movies was called F for Fake. Do we see a theme here?

Just proves that this kind of stuff has been going on for a long, long time. We’re just not all crowded around a 75-pound Philco nowadays — it’s just algorithms nowadays instead of a big guy named Orson.

Speaking of guys with big personalities behind a mic, this year-closing review is of Pontypool, a movie that came out in 2008 where a radio ad about a missing cat named Honey might have caused a bunch of people to go wild and herd through a blizzard in a small Ontario, Canada, tearing other people into bits.

It’s based on a book by Tony Burgess, Pontypool Changes Everything, that I haven’t read yet, so this review is not tainted by the whole does-the-movie-live-up-to-the-book comparisons that sometimes jumble things up. They also made it into a radio play, which would be more of a natural (and easier) transition than making a movie about making a live radio show. But Pontypool director Bruce McDonald and Burgess did it.

Now nobody’s going to confuse this with other four-star zombieramas such as Romero’s first three Dead movies, the Fulci flicks or even Shaun of the Dead as far as the volume of red meat/gallons of blood quota is concerned. In fact, those obsessed with busting the scale on the ol Vomit Meter will find this one kind of boring. But this thinking-person’s “zombie” flick is different enough, moody enough and subversive enough to entertain if you give it a chance. And, technically it’d be a perfect Valentine’s Day flick to watch after My Bloody Valentine since that’s when this one takes place.

What we get is a strange monologue in the beginning over a visualization of an oscillator involving a missing cat and the strange interconnectedness of things that doesn’t quite make sense delivered in an almost free-form stream of consciousness by radio host Grant Mazzy (Stephen McHattie).

He’s headed into work as his overnight tape is being broadcast on his station, navigating through a snowstorm and firing his agent, all before the 6 a.m. start of his show. He’s still trying to claw his way back to where he thinks he belongs — he was a host in a Major Metropolitan Media Market before being dismissed and now, like Jaws trapped in a kiddie pool, has his big-time ego restricted to broadcasting out of a church basement to a town of about 1,000, and reading obits about folks who died in farming accidents and were active in the local church.

While stopped in the road, a babbling woman bangs on his car window, startling Mazzy, but she then staggers away before they could have any meaningful exchange. While unusual, he has to get into work and makes a mental note to work it into his show.

Once at the studio, Grant clashes with his producer, Sydney (Lisa Houle, McHattie’s real-life wife), generally behaves like a loose cannon, has kind of a paternal aura with production assistant Laurel-Ann (Georgina Reilly), since she looks up to him and is eager to help the star of the show, even as he stirs the pot and elicits Sydney’s wrath.

Things proceed somewhat normally during the show until some initial reports of a mob scene outside a doctor’s office, and now it’s War of the Worlds War Z (the book, not the movie) with some anecdotal on-the-scene reporting by traffic guy Ken Loney (voiced by Rick Roberts) via phone as they broadcast the news, trying to figure what’s going on, whether people are going mad, what’s making people go mad, how whatever it is is being spread and what can be done to warn others, even as the infected are attracted by the sound of their broadcast.

McDonald and Burgess and crew had the courage to basically do a zombie-type flick in one location, a la Night of the Living Dead, mushed together the radio reporting style of Welles’ War of the Worlds, worked in the requisite 1950s sci-fi players (the know-it-all scientific expert and the military show up), worked in a siege and put together a hell of a cast to pull off Burgess’ script, which gives the infected folks a unique linguistic reason to become bloody marauders. (Communication is key, Honey).

• Best Left Unsaid: When, after he succumbs to the infection live on air, traffic guy Ken Loney’s true background is revealed by Sydney.

• Best Brain: Dr. Mendez (Hrant Alianak), the guy whose office was attacked, realizes that if he keeps speaking in English that he’s going to go downhill and succumb to the infection. He starts talking in other tongues.

• Best Dig at Major Media: When Grant calls the British Broadcasting Corporation a satellite affiliate of his small radio station.

• Best Dig at Minor Media: The local cast of Lawrence of Arabia got into costume to perform a song on Mazzy’s show. Also, the obits.

• Best Chemistry: McHattie and Houle in every scene they’re in. Total commitment. (Did I mention they’re married?)

• Best Spew: When one of the infected can’t find someone to transmit the infection to, she barfs all over the studio glass.

• Best I Don’t Know What It Was Teasing, But I’m In: There’s a post-credits scene. Not sure what it meant, but it’s good to see the story didn’t end at the cut to black and the aftermath news clips.

Absolutely four stars (a rarity for a flick with just a couple dead bodies, no breasts and not a ton of blood).

McDonald, McHattie and Houle have collaborated on a follow-up in the spirit of the post-credits scene featuring the couple called Dreamland. I’ll check it out at some point and there are rumblings that a true sequel to Pontypool can still happen. Sign me up.

Pontypool is available digitally on iTunes or you can get scour online merchants for the DVD.