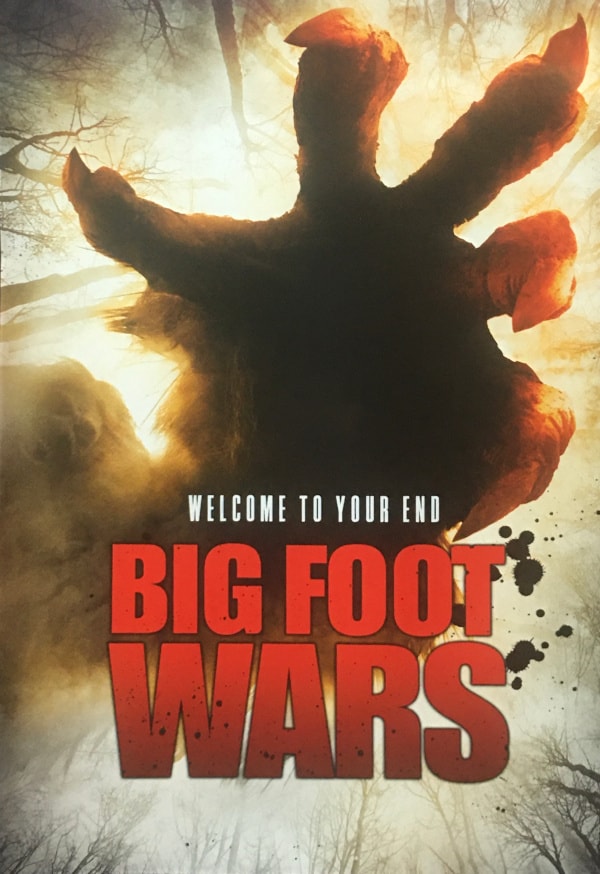 The town of Boggy Creek is under siege by bloodthirsty Bigfeet with mating on their minds in "Bigfoot Wars," which features past Hubbie nominees C. Thomas Howell and Judd Nelson.

Its initial heydey being more than three decades ago in the 1980s/early 1990s, people today might not be aware of the importance of Bigfoot to one motorsport in particular.

The most famous one (at least the one that inspired a whole bunch of Hot Wheels, cartoons and video games) was built in 1974 by a guy out of Missouri named Bob Chandler. The Victor Frankenstein of the automotive world, he literally created a monster with his Ford F-150 with reinforced frame and big tires that could crush some junk cars by running them over at state fairs, car dealerships and eventually stadiums and indoor arenas.

Chandler named the truck “Bigfoot,” establishing a legacy based on squashed clunkers with appearances and near-appearances in flicks familiar to Drive-in Mutants – including The Cannonball Run and Road House. In the intervening 46 years, that first monster truck has spawned 19 sequel models, more than Michael Myers and Freddy Krueger combined (remakes not included).

And there’s all the other monster trucks, too, like Grave Digger, Bear Foot and Snake Bite, just to name three. And there’s Swamp Thing (Adrienne Barbeau not included), Predator (Arnold the Barbarian not included) and El Toro Loco (six-pack of Corona not included).

So if you want to spot a real Bigfoot but don’t want to put on hip waders, one of those duck hunter hats and really warm socks, check this website out after this pandemic thing simmers down because at least you’ll be able to know when this one shows up.

And speaking of showing up, we again have a pair of Drive-In Academy Award nominees from back in the day popping up in this week’s Bigfoot-related flick.

C. Thomas Howell (nominated for The Hitcher, To Protect and Serve and Hourglass) uses the character he might have developed for auditions for Justified, Sons of Anarchy and Breaking Bad, and Judd Nelson, himself a Hubbie nominee for New Jack City back in 1991, are the marquee names in Bigfoot Wars, which came out in 2014 and is based on the four-book Bigfoot War series from author Eric S. Brown.

This one starts out with the standard Jaws initial attack with a guy getting his neck ripped apart by a Bigfoot in his trailer after aardvarking a much-younger woman. The woman we later find out is Dakota Jesterson (Audrey Ellis Fox), the daughter of redneck crime lord Zeke (Howell). She gets dragged away, hair-first, by Bigfoot to an unknown fate.

They get to their campsite, pitch their tents, argue about having sex, play volleyball, argue some more about having sex, run off into the woods to have sex, don’t have sex, argue about how they’re not having sex while everyone else is, have sex and then, mercifully, five of em end up getting killed by two Bigfeet. (One throttling; one poorly choreographed neck slicing via claw where the swipe missed the actor by at least eight inches; and one tug-of-war dismemberment if you’re keeping track. The last two get attacked in the SUV they drove off in and presumably killed because they stop the dang vehicle since they thought they hit their naked friend who was at the side of the road, but it was too dang dark to see what happened). The lone survivor,  a naked blonde who ran off while Bigfoot was strangling her tatted-up boyfriend, has an unknown fate.

The sheriff of Boggy Creek (nice touch) shows up to investigate the scene of the slaughter, and the mayor tries to convince him that it’s a wild bear attack as we continue to tread Jaws territory. This is our hero — even though he’s third-billed on the poster — a guy named Taylor (Holt Boggs). He’s SEEN SOME STUFF because he served in Somalia, has a failed marriage and an angry high school senior daughter. He frequently voiceovers about all of this and about how it’s such a nice day outside in contrast to all this bad stuff that seems to be happening in his town.

Taylor meets prescription-drug addicted Dr. Evans (Nelson), and Judd gets to do the whole Richard Dreyfuss “it wasn’t a boating accident” scene from Jaws so he can tell him that all these bear attacks aren’t bear attacks, they’ve been done by something else.

A guy who is drunken driving out in the woods comes across a beaten-up Dakota and takes her for treatment to Evans, but that night Taylor’s daughter gets dragged away from the Camaro she’s in by her hair after a Bigfoot attacks a drive-in and stomps on her geek boyfriend’s head.

This, of course, triggers Jaws trope Numero Four-o where we have the lawman, his deputy (they probably couldn’t convince Judd to go out in the woods) and Zeke banding together to go out into the wilds to figure out just what the heck keeps attacking everybody. Spoiler: It’s a bunch of Bigfeet.

• Best Gore Effect: The second jerkola boyfriend who gets his throat ripped out by a Bigfoot in the opening sequence has this one flap of skin that moves back and forth as the fake blood spurts out. Nice touch.

• Best Bit of Bigfoot Trivia: Friends of the Drive-In Mutant Community Todd Jenkins and Billy Blair, who starred and created Cherokee Creek, the indy Bigfoot flick I reviewed a couple weeks ago, met on the set of this flick and appear together in a brief scene. Blair plays a paranoid guy hanging out in a metal shack apparently making meth, who shoots up the place when camera guy Aaron (Jenkins) and girlfriend/anchor enter. An inferno results, a Bigfoot barges in and we don’t know whether Blair’s Slim Eddie dies. As he and his girl are trying to escape, Aaron apparently steps on a land-mine, does a full somersault and then is missing body parts when he lands.

• Best Way to Live the Dream: C. Thomas Howell’s Zeke does the most damage on the human side of the Boggy Creek Bigfoot War, dispatching multiple Bigfeet by shooting em in the head, sledgehammering em in the head and, when all else fails, cutting off the head. He also lives out the Ultimate Bob Marley Fantasy by toking up in front of the law AND shooting the sheriff (but he also shot the deputy, so half a star deduction for missing out on an opportunity for additional irony).

• Best Monologues: Once Zeke shows up, the filmmakers got their money’s worth out of C. Thomas with him going on about the stark differences between civilized and barbaric behaviors, literacy: “I can sign my scrawl on the banker’s dotted line if need be. I know enough about your symbols to get by,” and recaps all of the backstory from the Bigfoot War books that the producers couldn’t afford to film about a shamanic curse and why the Bigfeet need to abduct women and drag them away by their hair to their cave for breeding purposes. It’s a long way from Soul Man, for sure.

There are plenty of flaws with this one. Scenes go from day to night, characters’ fates are unresolved or would have been resolved a lot better with improved lighting. At least four or five people (I think) get killed in scenes, but it’s too dark to see whether they actually got killed and how they did if they did. With a brief runtime of about an hour and 17 minutes, they could have spared at least five or so more minutes of Bigfoot vs. human carnage or given us the Alien/It’s Alive plot resolution for Dakota.

Another detriment is that, once again, there are no vehicles flipped over as required by that trend-setting episode of the Six Million Dollar Man that featured Andre the Giant as Bigfoot fighting Lee Majors.

It all hashes out to two stars.

Check out Bigfoot Wars on DVD, because it doesn’t look like it’s available anywhere streaming right now. I found my copy for a buck at a Dollar Tree, and if you want to check out the actual source material that the legion of hardcore Bigfoot War literati say in Amazon reviews was blasphemed by this adaptation, go to author Eric S. Brown’s Amazon page.

It’s time to give thanks next week as we close out Bigfoot hunting season with one more flick featuring a big guy in a hairy costume whomping the crap out of people in the wilderness.