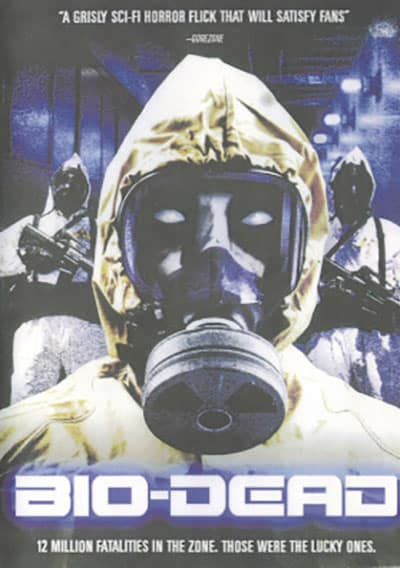 The promise of a toxic mutant apocalypse that expectations brought for Bio-Dead doesn't come to fruition. If Bio-Dead had gone more of the glopola route with the spewing of blood, weird-colored fluids and scabby flesh with copious oozing expected from a pandemic flick instead of a Saw/Hostel torture redux and a bald albino dude, we might have had something more.

Hope everyone’s continuing to cope during the latest weeklong installment of “America Shut In.” Here at the Nagy household, we’ve got work conference calls, immovable cats, Lego sets, cut-throat Uno tournaments and the dulcet sounds of YouTube gamers and “social influencers” to keep us occupied until the weather gets a touch more hospitable here in lovely Ohio and we can kick ourselves outside.

Hope everyone’s continuing to cope during the latest weeklong installment of “America Shut In.” Here at the Nagy household, we’ve got work conference calls, immovable cats, Lego sets, cut-throat Uno tournaments and the dulcet sounds of YouTube gamers and “social influencers” to keep us occupied until the weather gets a touch more hospitable here in lovely Ohio and we can kick ourselves outside. Rest assured that I wasn’t completely off the drive-in grid last week as I checked out the trailer for the upcoming release The Archivist, posted on Joe Bob’s Facebook page in case you missed it, but please accept my apologies if the absence of a full review left a void in your mutant hearts.

Before we get into this week’s pandemic time-killer I want to give a quick muchas gracias to Ted Johnson who set my butt straight on a bunch of things regarding Japanese “panic movies” from the 1970s a couple weeks ago after my subheading on my review was a bit less-than-accurate in regards to Toho Studio’s picking up on the disaster flick trend. Check out the comments under the link to my review of Virus on Facebook to get a quick overview on a Japanese film genre that destroys models but doesn’t involve dudes in monster suits. Thanks again, Ted!

So this week, I pulled out a DVD that I picked up from one of the local Family Video stores before all heck broke loose and you weren’t allowed to do anything. At first glance, it looked like it’d fit the ongoing theme of Viral Pandemic that we’re all living through. Thusly I cracked open Bio-Dead.

We start out with an Escape From New York-style text caption saying that there was a bioterrorist attack using a toxic airborne agent that killed nearly 12 million people over a 4,061-square-mile area on April 17th of an undetermined year at 11:43 a.m. (Pacific Time) in SoCal. Budget restraints obviously limited the vision of the filmmakers from depicting that particular incident and it would have been a pretty impressive movie to see. Sadly, instead, we are informed that because of the scope of the disaster, the government couldn’t handle it and all documentation of the dead and survivor searching has been outsourced to a private-sector company, setting us up for a tale of four dudes in biohazard suits traipsing around a building in the dark looking for stuff and being harassed by either a shirtless version of the creep from Dark City or one of Immortan Joe’s followers from Mad Max: Fury Road, depending on how old you are and which reference works best for you, that does the whole Marilyn Manson shaky head thing that was used ALL the time in 1990s music videos.

Bio-Dead bookends itself by lifting directly from a couple of higher-quality flicks with “Dead” in the title — namely the original Night of the Living Dead where we get to see (in senses-shattering black and white!) during this flick’s opening credits some of the victims of the attack in various corpse-like situations: dead person flopping out of car, dead person on sound mixer, dead people in an office. And for reference’s sake, Bio-Dead’s end credits take a cue from the remake of Dawn of the Dead where we get a whole ‘nother sequence that shows what happens to the crew that we see in the very first shot.

However, we get baited-and-switched twice within the first five minutes. No super mass casualty drama, and the first group of live people we see at the outset with all the guns and automatic weapons isn’t the group that we follow through the whole movie. (And the audio of this second group, which is actually the FIRST group we see, getting torn apart in the first couple of minutes doesn’t even match up with what we see post-credits, either). Instead we get to experience the travails of four gig workers (one who confesses to a co-worker later on that he couldn’t get a job at a fast-food place) unidentifiable for the first 15 minutes of the flick because they’re all dressed up in identical white biohazard suits and hoods and masks and they all sound like Ted Levine’s Buffalo Bill ordering two triple cheeseburgers and a side order of fries and a large orange drink through the drive-through lane.

They find a building that has a lounge (including a pool table), communal bathrooms, office areas and some of those big-box home improvement store carts that you use to push lumber around but also turn out to be useful when one of your crew members starts spitting out Alka-Seltzer bubbles and has a neck wound and you don’t have a stretcher around. Magically there are no dead bodies in the building and there are no readings of toxicity there either, so after about 15 minutes of this, the four workers dehood and we meet…

Benson (the grizzled boss of the crew), Graham (the guy with glasses who smuggled in a gun – alliteration helps sometimes), Jackson (the joking black guy – guess who’s the first victim?) and Ellis (the confessed fast-food rejectee we’re supposed to identify with).

This highly functional (I’m using the term functional very loosely) quartet bicker, start hearing some strange noises, lose radio contact with the outside dispatch center, turn on a TV monitor that unleashes the previously mentioned pasty albino twitching bald creature of dubious physical manifestation, which I guess is the bio-dead of the title, and then they get stalked by it until two of them get killed/possessed/whatever and trap the other two guys in a torture chamber.

That story ends and then another crew is dispatched and then the same exact thing happens during the end credits, only in about 3 and a half minutes.

After much conferring with my fellow audience members, we reached a consensus that Bio-Dead was worth about a star and a half, but the automatic half-star deduction also goes into effect because no garbonzas. So one star. (Sorry, I don’t make the rules here).

If it had been a bit more focused and gone more of the glopola route with the spewing of blood, weird-colored fluids and scabby flesh with copious oozing that is expected from a pandemic flick instead of the Saw/Hostel torture redux at the end, then we might have had something more here. Still, check it out if you like biohazard suits.

Bio-Dead is available on DVD and to stream on Amazon Prime.