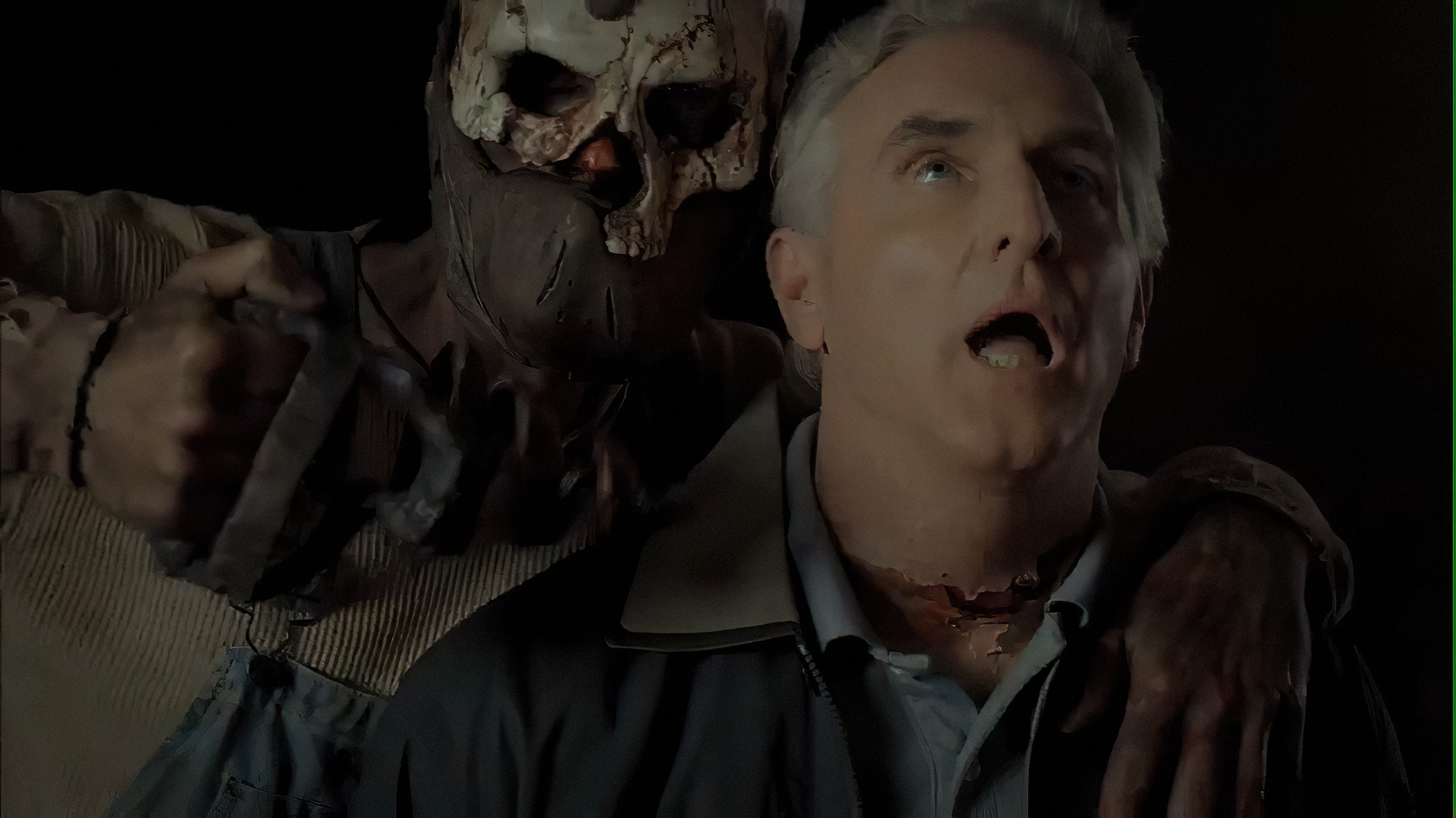 A killer comes right out of the screen with a weird implement of death as he slays both on the screen and menaces the audience in the theater in "Midnight Movie."

But before he gets into the review, we’ll give a little background about what a midnight movie means to the Mutant Fam

The history of the midnight movie can be traced back going on 50(!?) years ago to the party-time 1970s.

After doing whatever it was that they were doing earlier in the evening (drinking, eating, raising hell, roller skating, attending discos, ingesting substances, hanging out in the woods, not looking at their phones) on a Friday or a Saturday night in the old days, proto-Mutants would go to a hardtop (Old-school JBB Definition: hardtop = a theater with a roof on it) in metropolitan areas both big and small to see really weird stuff at the stroke of midnight.

(It helped if you were in a certain mindset.)

Now, please take note: A midnight movie is different than the grindhouse experience where you’d have a bunch of movies running constantly through the day, sometimes sharing a theme, sometimes not. Joe Bob’s favorite grindhouse example was the theater in NYC that always showed “Three Giant Kung Fu Hits,” but these movies would rotate in on a weekly basis. Sometimes if it was popular, or if the theater couldn’t get a new flick because the distributor fouled up, then a film was “held over.”

Often, once a flick was gone, it was gone, since the print was shipped off to who-knows-where. It might come back under a different name — Tobe Hooper’s Eaten Alive was released and then re-released under 4 or 5 different titles as was The Devil’s Nightmare, so there was a chance you’d get suckered in at the grindhouse into seeing something you already saw because they re-titled it and threw together a different poster.

That’s not to say that grindhouses didn’t play weird stuff. It’s just that the flicks used to sustain the grindhouse model often did not have the staying power of the midnight movie. There was a certain something that kept people coming back on a weekly basis to see the same thing over and over again, and that’s what epitomizes a midnight movie.

(It helped if you were in a certain mindset to see Jack Nance’s hair in Eraserhead, Tim Curry prance around in The Rocky Horror Picture Show or Marilyn Eastman meet the wrong end of a garden trowel in Night of the Living Dead.)

So midnight movies became the prototypical cult flick – a term that has been diluted by critics over time these days to include stuff that didn’t do well at the box office but then developed a later audience through physical media or being shown often on cable TV. With the further fragmentation of what’s out there, it’s going to be harder and harder to throw the label of “cult flick” around, but that’s a whole another thing to delve into. But the label definitely does not mean the same thing as it used to.

So back in the days of the midnight movie and independent theaters, an oddball mind-blowing flick was given the chance to find an audience (often out of necessity because they didn’t have anything else to play). Then, when word of mouth spread, people kept showing up more and more to these midnight movies because they:

Hence a literal cult — i.e., a group of people united by the shared experience of these midnight movies would grow and they’d ritualistically show up weekly again and again to see stuff like Rocky Horror that played for not weeks, not months but YEARS in the 1970s and well into the 1980s. As a kid in 1985, I remember seeing ads for it in the newspaper showing that it was playing in a local theater alongside those for Day of the Dead.

Some of the other big ones (check out the book Midnight Movies by Stuart Samuels for more info) include David Lynch’s Eraserhead; George Romero’s Night of the Living Dead; John Waters’ Pink Flamingos; Alexander Jodorowsky’s El Topo; Reefer Madness; and the reggae actioner The Harder They Come.

A bunch of different factors weakened the midnight-movie phenomenon bringing it to a virtual close, some of these which overlap with the big hit drive-ins took in the 1980s: the death of independent movie theaters, the rise of homogenizing event blockbusters and national theater chains, cable TV, VCRs, the fact that people were not getting into certain mindsets as often and not having really great experiences before, during and after movies… the list can go on.

So now the big theater chains have tried to equate premiering a movie on midnight Friday night as special. Not the same. Nothing surrounding the whole midnight movie phenomenon probably ever will be the same, although what went on with Tommy Wiseau’s The Room (pre-pandemic, obviously) is probably the newest, purest “midnight movie” experience originating from the 21stcentury and quite possibly the last.

And speaking of dying experiences at a hardtop, this week’s flick is Midnight Movie from 2008.

To open the lone feature directed by Jack Messitt (at least according to imdb), we have a guy named Radford who made a movie called The Dark Beneath and ended up getting committed for treatment because he might have killed a bunch of people when writing/directing/starring in it 40 years ago in the late 1960s-early 1970s.

The goofy doctor that’s treating Radford at the Newhaven Psychiatric Hospital decides to play the movie using an old projector and a bedsheet to try to achieve some kind of psychological breakthrough. Instead, while the doc is outside of the room conferring with another doc, Radford does the 1990s heavy metal video twitching thing, chews his wrist off and uses the blood to paint some runes on the floor. This opens some kind of dimensional portal into the movie he was watching that transforms him back into a limping killer wearing a skull mask who wields this conical metal implement that he sharpens on a grinding wheel and uses to extract internal organs from his victims.

Everybody at the hospital is killed – the police say it was 70 folks – but no bodies were found, and this is explained later in the flick. But we don’t get to see any of that massacre, instead we get a crime scene photo montage of a bunch of meat and blood strewn about the hospital as the opening credits start and we hear some growl–metal music.

After the opening titles, we find out it’s four years later and the cheap owner of the local movie theater has scheduled a midnight showing of Radford’s flick. The theater has three workers and then nine people show up to watch the flick — a biker and his gal; the police detective investigating the hospital crime; a psychologist from the hospital; four pieces of late-teen meat and the little brother of one of the workers who sneaks in.

Once the flick gets rolling on the projector, The Dark Beneath turns out to be a Texas Chain Saw Massacre/Psycho redux in black and white with folks experiencing a flat tire wandering into the wrong house that houses a killer and his mom. But by playing the movie, the killer then is given agency to emerge from the flick on the screen and kill in the real world. Then the movie playing on the screen shows the people in the real world getting killed and dragged into this basement purgatory.

To borrow a familiar tagline, who will survive and what will be left of them?

• Best Performance: Hands down it goes to Stan Ellsworth as burly Harley rider Harley who delivers all the best lines, including: “Testosterone, babe — it’s the natural order of the universe”; and “Can it, college dudes — ruinin the movie”; and “We’re getting punk’d you nitwits, f— you, I didn’t sign any release”; and “I can’t believe I want to get a cop’s attention.”

• Best Eye-talian Flick Homage: We get everybody locked in the theater with no means to escape (Demoni). No Samurai sword/motorcycle fight or helicopter dropping through the roof, and no Bobby Rhodes. All Mutants can agree: Everything is better with Bobby Rhodes.

• Best Gross Out: The killer (Lee Main) gives one of his victims the world’s worst pedicure.

• Best Kill: Radford uses his sharp conical metal thing (I seriously have no idea what to call it) to puncture two folks at one time.

• Best Way to Double Your Body Count: Things don’t go well for the folks in the movie-in-the-movie as well.

• Best Way to Show No Fear: Bridget (Rebekah Brandes) and her brother Timmy (Justin Baric) recite a psalm and the roster of the Chicago Cubs respectively in an attempt to make the killer disappear. You’ll have to watch to see how that goes.

Every character does AT LEAST one box-of-rocks thing. There’s some supernatural stuff. There’s a Scream homage with know-it-all movie geek Sully (whose tender gastrointestinal system can’t handle his Raisinets) laying out the rules. The theater is definitely not up to building code standards, and how the heck did the theater owner get the rights to show Radford’s flick? Wouldn’t it be in the police evidence room?

Midnight Movie was released directly to DVD and did well enough that it was recut and released again in a director-approved Killer Cut. I’m not sure which one I saw because the DVD menu didn’t specify, but it was a brisk hour and 20 minutes, which online sources seem to indicate is the Killer Cut while the original release is said to be a few minutes longer.

Midnight Movie is available on DVD, Blu-ray and the Killer Cut is available to stream on Amazon Prime. Check it out!