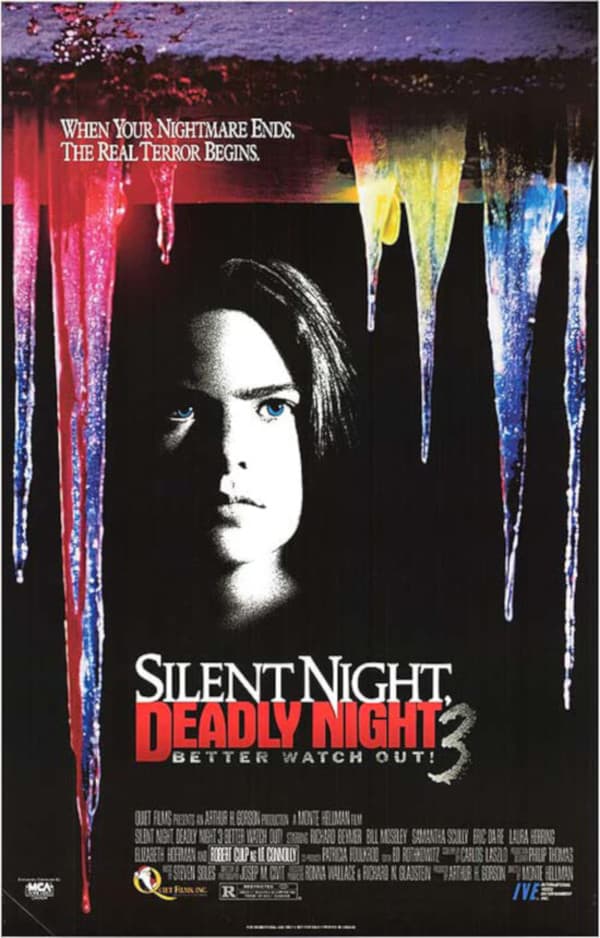 The third "Silent Night, Deadly Night" flick took out the best thing about the second one by recasting the role of Ricky and adding some faces familiar to Drive-In Mutants. But was throwing a colander painted to look like an exposed brain on Bill Moseley's head and telling him to act like a zombie a better strategy than throwing him in a Santa suit and letting him go wild?

Bill Moseley in weird headgear, two guys from Twin Peaks and Cosby’s partner from I Spy Don’t Measure Up to Part Two-o

Continuing with the rule of these types of things happening in threes, my second Screening Room gift to the Mutant Family this week is taking a look at the third installment of that venerable holiday horror franchise that got PTAs across the country (including here in Cleveburg, Ohio, in Milwaukee and elsewhere) and other folks all riled up back in 1984 cause it had a couple of killer Santa Clauses in it.

The disclaimer before I get into it is this: SNDN2 became an instant favorite of mine after I saw it for the first time on last year’s Last Drive-In Christmas special — mostly because of Eric Freeman’s muscular and maniacal performance as Ricky Caldwell. (Seriously, Eric — if you have some tips for the Mutant Family to help work off the post-holiday poundage, hit us up). He flat-out WENT FOR IT, and it WORKED. The entire “Garbage Day!” spree is absolutely legendary. But because it came out in 1987, the flick and performance were underseen and underappreciated, and couldn’t find the audience unless someone happened upon it at a video store and, of course, until the Internet came along.

Still, two years after the release of Part 2,  the filmmakers thought enough of continuity to have Part 3 pick up the Ricky storyline since he survived at the end of SNDN2. But instead of Freeman, the filmmakers brought in Bill Moseley, the legendary Choptop from Texas Chainsaw Massacre 2 to be the killer.

But what did they do with the guy who spent all of TCM2 jumping around, screeching about Nam flashbacks, bludgeoning folks with hammers and plunging a hot wire clothes hanger in a metal plate on his head and being even more maniacal than Leatherface and Jim Siedow’s patriarch character combined?

They went a complete 180 from what Freeman did in his performance, which was the worst thing they could have done because you know that if there’s ONE THING that Moseley, the guy you hired, can do, it’s playing out-of-your-mind gonzo crazy.

Seriously – Bill Moseley’s lines in SNDN3 consist of  rasping “Laura” a lot, “Yaaaargh” (when he gets stabbed in the arm toward the end) and a post-credits “And a happy new year.” (Maybe I missed an utterance or two.) No foaming at the mouth, no rants. Nothing.

Thing is, the filmmakers had to have seen TCM2 because that’s probably the only reason they put the colander on Moseley’s head in the first place because maybe they thought it might have helped him feel comfortable to get the maniac juices flowing, no Santa suit required, since he wore some headgear when bringing the crazy.

But then they probably didn’t even BOTHER watching to the end of the second SNDN again before doing the third one because didn’t take into account that Ricky didn’t get shot in the head, so his brain wouldn’t need to be enclosed in a colander with some kind of antenna box on top that makes him lurk around and act like Bub the Zombie from Day of the Dead and creates a psychic link between him and this blind young lady named Laura (Samantha Scully).

Yet the filmmakers had the presence to re-reuse some of the flashback footage that was already reused in Part 2 that they still had lying around to illustrate the psychic link enabling Laura to see what is in Ricky’s mind and then Ricky to be able to follow Laura and her brother to their Grandma’s house.

What follows is a pastiche of a lot of well-worn horror tropes, with visions and a killer in pursuit, but not only does Moseley not get to speak much, he doesn’t even don a Santa suit when he starts slaughtering people, which is what you’d expect from a Silent Night, Deadly Night flick. (He does kill a guy dressed up as Santa).

Fans of Twin Peaks will be interested in the novelty of seeing Richard Beymer (hotel owner Ben Horne) playing Dr. Newbury, the scientist doing the psychic experiments linking Laura and Ricky, and Eric Da Rae (Leo Johnson) being a good guy for once as Laura’s brother, Chris, before they were in David Lynch’s groundbreaking series.

But this one is strictly by-the-numbers as the Doc and the law try to track the killer down in time while the killer kills and the blind Final Girl does Final Girl stuff.

• Best Christmas Recipe for Horror Movie Casserole: You get some Eyes of Laura Mars because Laura can see what Ricky sees, some Nightmare on Elm Street because Laura has this opening dream sequence when she sees a killer Santa, some Halloween because Ricky is just a silent killer with an unclear motive and some Wait Until Dark action when Laura is being stalked in the attic, but nowhere near as well shot.
• Best Way to Keep in Touch: This guy working at a gas station gets decapitated while his girlfriend is talking dirty to him on the phone, but Ricky thoughtfully leaves the severed head by the receiver so the girlfriend still has someone to talk to.

• Best Water Conservation Effort: Chris gets to take a bath with his girlfriend Jerri (1985 Miss Texas and Miss USA Laura Harring) as they both do their part to responsibly save his grandmother money on her water bill.
• Best Comeuppance: This hospital receptionist is unhelpful to Laura. Laura has a premonition of the woman getting her throat cut. The receptionist wishes Laura a “Merry Christmas.” Laura says “Not for you.” Laura leaves. The woman gets her throat cut later. Harsh.
• Best Monologue: As they’re driving to the familial orange grove where they think Ricky is tracking Laura to, Doc Newbury imparts the following wisdom — “There are no innocent people, Lieutenant. We’re all guilty. Guilty of being stupid, irrational, doomed and badly designed. No, science is the only way to restore our innocence. Ricky isn’t a killer. He’s a way to stop people from killing like snake venom is a way to cure the bite.”
• Best Comeback: Chris takes a lickin from Zombie Ricky but keeps on ticking to an attempt to save his sis.
• Best Procedure: Familiar face Robert Culp (I Spy and umpteen other appearances) plays the long arm of the law, Lt. Connely, who laughs at his own jokes a lot, tries to refer people to his cell phone provider so that he can get a $100 discount on his bill and says “”I’d just kind of like to stop him before he kills someone else, you know?” and “Speaking of snakes, excuse me while I relieve the reptile.” Then his car gets stolen when he goes to take a leak — movie law enforcement at its best.

One star. This flick stuck a big icicle through the ear of the Caldwell storyline, and the underuse of Moseley when we all know what he is capable of really wasted the opportunity for something special.

Truth be told, if you liked what you saw in Part 2, skip this one and keep your fingers crossed that Eric Freeman can get his as-yet-unproduced follow-up script continuing the story of a non-lobotomized, non-colander-wearing Ricky off the ground. Until then, check out this short he did that continues the story of the real Ricky.

Or, if you want to put yourself through it, check out Silent Night, Deadly Night 3: Better Watch Out! streaming  for free on TubiTV or seek it out on DVD and Blu-ray.