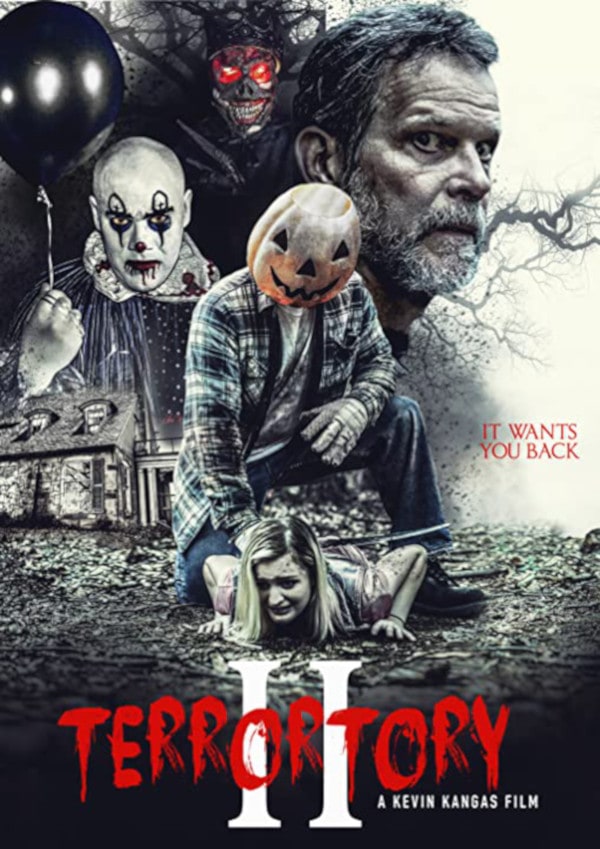 Screening Room takes another journey into the Terrortory, the creepy haven for slashers and other supernatural perils in west-central Maryland in "Terrortory II," Kevin Kangas’ follow-up to his 2016 horror anthology.

I’ve caught a mild case of sequelitis that will be lasting a couple of weeks here thanks to a pair of independent filmmakers whose flicks I’ve reviewed here before and whose flicks I’m reviewing again.
This is common among movie reviewers, and you really shouldn’t worry about me too much. The lasting effects of sequelitis are less aggressive if you wash your hands and bathe regularly. There are also creams
for really severe cases and that assist with the chafing. I’ll keep you posted on my progress.

But, before I get into the reviewing part of the review, we need to review something else.

That is, the Numero Uno rule for a sequel according to the guy whose name graces this very website.

“Some people know how to make sequels and some people don’t. Like [movie title deleted by the editor of this column for the Internet’s protection] the one that didn’t have Jamie Lee Curtis, we all know that was a joke. But these ‘Friday the 13th’ people know their sequels. These people don’t just make up a new story. These people made the exact same movie four times in a row.”

Filmmaker Kevin Kangas didn’t make the EXACT same movie for a second time when following up his 2016 this-region-in-Maryland-is-a-scary-place anthology that I reviewed early last year, but his Terrortory II calls back to all the high points of the first one and further expands the world-building of the creepy region in the west-central part of the Old Line State that he’s defined as the Terrortory.

But in the 2018 sequel, he made the framing story more resonant and important to the flick, which strengthens the flick by a fair margin. Rather than the horny young couple on babysitting duty being menaced by a prowler in Numero Uno, we meet a guy named Aiden (Richard Cutting) who’s hiking and trying to map out the region in order to, he says, prevent other folks from falling victim to the creepy inhabitants such as the pumpkin headed killer with the big knife Smiling Jack and the Midnight Clown that tend to put the parts of people’s bodies that are supposed to stay on the inside out into the open air in a mess of blood, screams and pain, but not necessarily in that order. Also, the really observant folks who’ve watched the first Terrortory might notice that there was a hiker guy in the “Drone Collector” segment and it happened to be Cutting, sans goatee. Was it the same guy? Hmmmmmm… could be…

Kangas told me in an email that he felt that the second Terrortory flick is superior to the first, and I tend to agree. (I just watch the things and I’m not going to argue with the guy who MADE the flick.) One improvement is that he excised the cliched “filmmakers go in the woods and get slaughtered a la Blair Witch” that they did twice in the first one, laid out some more rules that expanded the scope of the regional mythology he’s made up, was able to weave clever callbacks to the first go around as well and was able to add a touch of levity to the flick as well — Wendigo cameo anyone?

Bottom line — if you like blood, enjoy anthologies, get creeped out by the woods and really liked the first Terrortory, you’re going to like the second one as well.

• Best Re-think What You Wish For: In the first segment, Meg gets spontaneously pregnant from making a wish at a mystic fountain. Best woman-giving-birth-to-a-full-grown-person scene since they did it in Xtro.

• Best Re-think What You Wish For, Numero Two-o: Tom also gets his wish from the mystic fountain as well and ends up raving mad, wandering around naked on the side of the road.

• Best Re-think What You Wish For, Numero Three-o: The girl and three guys who experience varying degrees of cranial trauma at the work-gloved hands of Smiling Jack after going out to the woods to find him.

• Best Haul: The three older guys snag valuable coins, jewelry, gold and even an old chalice, but the lure of what was at the end of the Pumpkin Trail over the delicacies of a buffet dinner proved to be too much.

• Best Use of the Rules: How Greg gets back at the Midnight Clown for Darla’s death in the first flick.

• Best Geographical Accuracy: Picnic Woods Road runs between Arnoldtown and Middletown. Rumor has it that a Mad Gathering happens about a quarter-mile off the road out in the woods. Just look for all the abandoned vehicles with their lights on.

• Best Guidance: Obviously Aiden, the retiree who’s taken it upon himself to document all the spots in the “Bermuda Triangle of supernatural manifestation” where the creeps stalking the Terrortory hang out and dispenses wisdom such as “Don’t stay out until sundown” and “I’ve seen it chopped to pieces with an axe. I’ve seen it shot a dozen times. Nothing stops it,” and “Well, they all can’t be winners.”

Three and a half stars.

And, if you happen to find yourself north of the Potomac River, west of Frederick, Md., and a bit south of Wolfsville this October and don’t feel like risking your life on the Pumpkin Trail, get a bunch of people together, stay indoors and check out both Terrortory and Terrortory II streaming on Tubi TV or Amazon Prime. The first flick is also available on physical media direct from Kangaskahn Films at their website.

Next week, my sequelitis continues. I have a feeling it’s gonna cause something pointy to pop up in a very noticeable place.