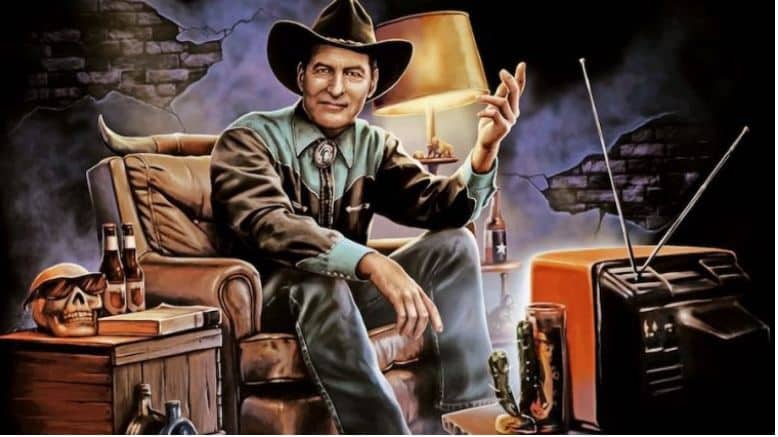 A History of Joe Bob in Cleveburg

In Cleveburg, Joe Bob first went all live on us

The theme song for Joe Bob Briggs’ show, The Last Drive-In on Shudder, proclaims that “Joe Bob is back in town!” This has particular importance in Northeast Ohio as his Oct. 9 appearance at 7:30 p.m. at the Capitol Theater in Cleveland approaches. Here’s why!

Through the mid-1980s, Joe Bob was cruising along in his 1973 Oldsmobile Toronado, writing a weekly column called “Joe Bob Goes to the Drive-In” that was sent out to about 40 newspapers across the United States, including The Plain Dealer in Cleveland. He reviewed “drive-in” movies — stuff with blood, beasts and breasts in addition to assorted -Fus (Kung, Gun, Knife and a host of others). He had a close personal correspondence with the big guy of horror himself, this writer named Big Steve King of Maine (you might of heard of him), and Joe Bob was organizing movie festivals in the Dallas area — his home base — to help keep the drive-in spirit alive in a time when mall multiplexes and Wal-Marts were wiping them out.

Then, in 1985, Joe Bob decided it was time to gift his loyal Drive-In Mutants with his actual physical presence in the form of a one-man show, “An Evening with Joe Bob Briggs.” But where? What city could possibly handle hosting such an epic event? As Joe Bob explained…

“…there were only three places in America where I could hold the world premiere of “An Evening With Joe Bob Briggs”: Radio City Music Hall, The Rose Bowl, or the High School Auditorium in Berea, Ohio.”

So Joe Bob booked his first live show to take place in July 1985 in Berea, a suburb a bit southwest of Cleveland. But why Cleveland (aka Cleveburg in his columns)? The area in particular was a fertile ground from the 1960s on for TV movie hosts who showed the type of movies that Joe Bob reviewed. Think Ghoulardi,Big Chuck and Houlihan and later Big Chuck and Lil’ John, the Ghoul and Superhost, to name a few. All these shows drew solid weekend ratings on the various local TV stations for decades, and the Joe Bob drive-in column was supremely popular with readers. That popularity in the Cleveland area of those kind of movies known by umpteen different descriptions — “drive-in,” “exploitation,” “grindhouse,” “schlock” or “B” movies — endures today with the twice-a-year Cinema Wasteland show, the yearly Ghoulardifest and the recently established Retro Invasion Weekend, all dedicated to movies with a drive-in bent even there are less than a handful of drive-in theaters operating in the area. And, as Joe Bob noted…

“During the 3 1/2 years of the column, the weirdest mail from anywhere in the country came from Cleveland.”

Joe Bob’s historic live appearance in Berea led to kids being conceived in the parking lot after the show, dead bodies being disposed of in the Cuyahoga River, and laid the groundwork for more Joe Bob live appearances and his decades of experience on TV spanning Drive-In Theater on The Movie Channel starting in the mid 1980s, MonsterVisionon TNT starting in the mid 1990s and his current show on Shudder hosting thousands of movies. In short, if it wasn’t for Greater Cleveburg, the history of entertainment might have changed, and Joe Bob Briggs as we know and love him may not exist.

Joe Bob is Back in Town!

Joe Bob’s latest show heads right back to the town that started it all. How Rednecks Saved Hollywood — Oct. 9 at 7:30 p.m. at the Capitol Theater in Cleveland— is a multimedia look into the role the proverbial redneck has played in the U.S. movie industry. Meticulously researched, as is all of his material from his hosting assignments, Rednecks covers two hours and more than 200 clips and stills from grindhouse and mainstream flicks. For just $22.50, the price of a coupla pumpkin spice Ventis at Starcrooks Coffee, you will learn:

. . . and dozens of other historical facts that you didn’t realize you needed until he deposited them in the rear lobe of your brain.

Tickets to Joe Bob’s triumphant return performance in Cleveburg at the Capitol, 1390 W. 65th St. are on sale now. Warning: This show is NOT for kids, except of the adult variety.

BEN NAGY has written and edited stuff for newspapers, magazines and websites and randomly showed up on the doorstep of Joe Bob’s booth one day after a commute from Cleveburg. After seeing Motel Hell on MonsterVision in college in 1996, Ben knew he’d make it through. You can follow him on Twitter @BJ_Nagy and he’s at most of the usual Joe Bob-related social media haunts if you want to say hi.