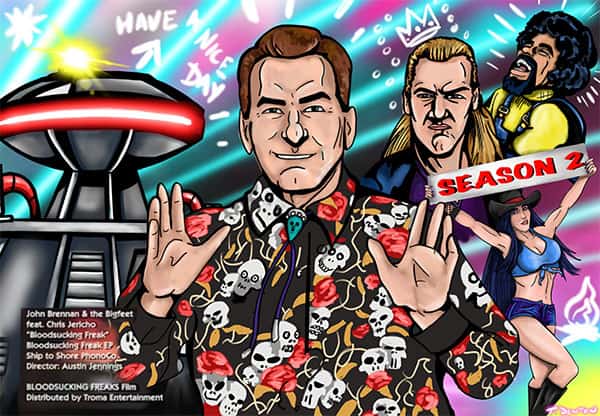 Very few loved it, a lot of people said they hated it, and us Mutants all lived through this sleaze classic(?) with Joe Bob and “Le Champion” Chris Jericho

The wrestler known as “Le Champion” — All Elite Wrestling megastar Chris Jericho — paid a visit to Joe Bob’s trailer to check out 1976’s Blood Sucking Freaks, a personal favorite of Jericho’s dating back to his high school days in Canada.

Praising the multiple-time world heavyweight champion, author and oh, yes, rock star as perhaps the “reigning expert” on the grimy and audience-polarizing flick, described as Joe Bob during a re-release as “the best art house film of 1983,” the choice to show it as the second feature of the season premiere (Chopping Mall was the first part) gained a particular poignancy due to the death of director Joel M. Reed from COVID-19 on April 12. (Well, that is, if anything related to Blood Sucking Freaks can be labeled as poignant).

But let’s face it. This is the flick that has crazed producer Sardu using nekkid slave women as furniture and telling one “Don’t you dare ruin my dinner,” as candle wax drips into her rear. It shows the now-faded power of the press as Sardu wants to prove to his trussed critic with the armpit stains that his Incredible Torture Show is ART. It has electrodes to the garbonzas, Ralphus the creepy maniac dwarf in overalls played by Luis DeJesus, later an Ewok, doing a bunch of really nasty things and enough sadistic stuff in it to create a lasting impression for 20 movies.

So, yeah, poignant probably isn’t the word we want to attach to a movie where a number of the actors had early deaths and that the King of Tromaville himself, Lloyd Kaufman, admits he probably wouldn’t distribute it if it was on the open market today.

But while Ralphus’ antics, the appendages rolling and learning the secret backstory to the origin of Jericho’s personal security guard from 1998-era WCW — didja see Darcy’s cosplay? — may have been surprising to viewers, there were surprises for all.

The man from Grapevine busted out with some factoids that brought even Jericho, a horror aficionado his own self, a bit closer to enlightenment. For instance, when Joe Bob revealed that the delivery drivers in the film’s opening scene were stunt doubles for Gene Wilder and Telly Savalas:

But Jericho and John Brennan had a surprise up their amps for JBB himself, transcending the entire production value of the feature we all were watching during a break late in the show with their two-minute-or-so rendition of “Blood Sucking Freak,” and an appropriate tribute to a movie with these transcendent totals:

And speaking of transcendence and the dropping of knowledge, Joe Bob also shared a secret reading list to help conquer time and space to survive a 20-hour New York-to-Sydney flight:

All of these tomes, in addition to potentially adding hernia-causing weight to your carryon, used in conjunction with some red wine will put you in an “altered zombie state,” will make endurance of that flight possible, he says.

Simply ask Le Champion — the drive-in critic with the cowboy hat knows what he’s talking about.