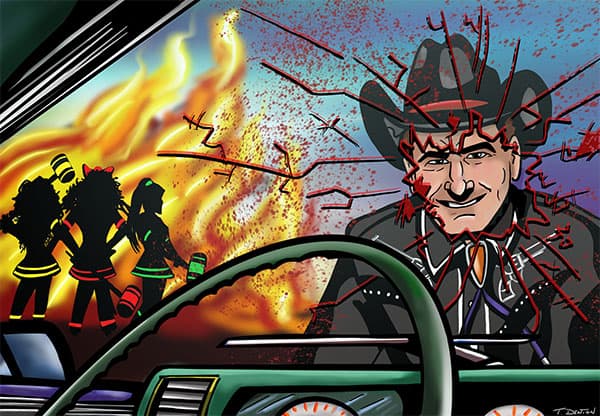 Heathers is that rarest of drive-in flicks, one rarely seen by us Mutants, a four-star film with no garbonzas and a stellar script. It won two Hubbies in 1990 and proved influential for years to come.

The second four-star feature of the night for Season Two-o, Week Two-o, following Maniac was that rarest of birds to be witnessed by us Mutants – a four-star flick with zero breasts. Even rarer than a no-star flick, (there might be a fistful of movies ever reviewed by the Drive-In Critic of Grapevine that avoided the near-mandatory half-star deduction due to an absence of garbonzas), this winner of two 1990 Hubbies is one of them.

We’re talkin about Heathers, the high school movie that the evil goateed John Hughes from the evil parallel universe would have made had he slipped into our dimension.

Throughout the breaks of the movie, which featured JBB’s close personal Hollywood friend from Great Balls of Fire, Winona Ryder, Joe Bob reminded us that the thing that makes this super-dark comedy stand the test of time, is Daniel Waters’ writing.

“His dialogue is timeless,” Joe Bob said of the Hubbie winner, who added the term “Geek Squad” into the English lexicon (Best Buy thanks him, BTW) and managed to weave together references to Mark Twain classics, 1980s alt-pop, an early 20th century novel (ostensibly based on yours truly’s hometown in Ohio, where that beer/mineral water joke is not inaccurate) and Archie comics into his script.

A “superhero among film writers,” indeed – Waters’ script features all the cliques, rituals and archetypes that make high school that dry run into the competitive and segregated experience endemic in U.S. society. Plus strip croquet and a teen dying from Drano (no red spew, though).

So Heathers does portray through Ryder’s Veronica why high school is hated and how it might take a life-threatening experience with the wrong homicidal guy (Christian Slater won Heathers’ other 1990 Hubbie for his dialogue) to break free of one group. Thing is, though, our heroine just establishing herself at the top of her own pyramid at the end.

But, modifying Milton via Waters, as the saying goes, better to reign in the hell that is high school than to serve in heaven. So she’s still a winner. Or something.

And, slower than a Swedish pop supergroup’s output after consuming Lebanese hashish, we revisit this flick’s unique

But, as JBB reminds us, Heathers was the most angsty of all teen-angst movies ever made, serving as the polar opposite of the touchy-feely teen flicks en vogue at the time. It blazed a scorching trail for Election, Mean Girls, Juno, etc., yet the fact remains that the flick’s ending ironically smelled just like eau de John Hughes (hey — I coulda said Teen Spirit) with the re-establishment of a new high school order. That is, if you overlook the whole plot to blow up the school and the teenager blowing himself up. It doesn’t diminish the flick any, just reinforces that high school is, indeed, forever.

And speaking of social order, before we embarked on Heathers, JBB expressed his disappointment at the de-evolution of San Francisco, a place where his newspaper column was syndicated through the 1980s and where he performed before enthusiastic audiences at Wolfgang’s during his initial “Dead in Concert” show.

Yep, the city where promoter Billy Graham ruled, Carol Doda showed her stuff and JBB guested on radio station KFOG has gone from breaking the rules to making rules all over the place to the detriment of the San Fran way of life.

“Who cut the balls of San Francisco?” Joe Bob asked, lamenting the “descent into madness” of the city that inspired the caustic rebel journalist/JBB spiritual mentor Ambrose Bierce. These days, city leaders are enacting blanket bans that are the equivalent of “Communist lifestyle engineering.”

So now the city is “eating its young” and gone are the dogs hanging out of car windows, fast-food kids’ meal toys, pet stores, playing stickball and having chocolate milk in school lunches, Joe Bob said.