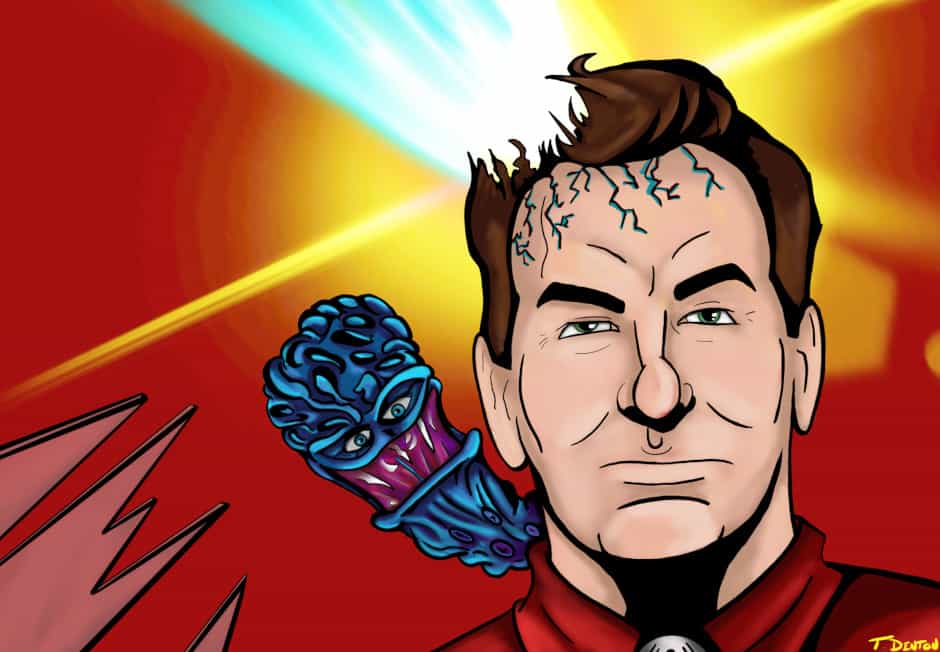 Gratuitous blogger Laura Beerman takes a swing at some Brain Damage, the first feature for Season Two-o, Week 3 of the Last Drive-In.

Only our juice will help you. You know that, don’t you Brian?

A little semantic lesson to start us off. Brain Damage is the name of the You Won’t Believe How Much Sleazy Crap is in My Head grindhouse buffet bonanza by Frank Henenlotter that Joe Bob out-of-the-gated-us with on Week Three. Brain damage also describes what will happen to you after watch what many consider to be Henenlotter’s masterpiece. Nestled between Basket Case and Frankenhooker, Brain Damage is a movie about a creature that looks like a cross between a penis and a turd with doll-like eyes and a knobby exposed brain who sometimes sings show tunes as he takes over your life. With this and a subway Basket Case cameo that almost made me wet my pants, what more could you want from a Friday night?

Before the freak fest got going, Joe Bob treated us to his personal views (a/k/a the weekly rant) on camera phones, Millennials’ nature-destroyin destination selfies at exotic locations, and enjoyin the moment – and your Cracker Barrel sugar-cured ham special – without taking a fucking picture of it. You know the rant’s about to get weapons grade when the clipboard comes out. All this plus a surprise phone visit from The Last Drive-In’s resident Mangled Dick Expert Felissa Rose – proving once again that livin La Vida Drive-In is enough to get you permanently removed from the Anthology Film Archives invite list. Joe Bob’s proud of that. And so are we.

I’ve clearly been watchin Joe Bob for too long cause dang if I didn’t like Brain Damage – and as is the case with most drive-in flicks, even better the second time around. And who wouldn’t? Brain Damage, in the words of the man himself, is another sensitive romantic tale about what happens when a modern boy-girl relationship is ruined by the guy loving a mutant creature that looks like a deformed phallus that’s been flushed down the garbage disposal more than he loves his family and friends. How many times has this happened to you? You come home to a loved one who doesn’t want to talk anymore? He’s bored. He’s occupied with other things. And then one day you discover the ugly truth: All this time he’s been strappin a piece of mucus meat to the back of his neck, asking it to shoot piercing blue electric light into his brain, goin out on secret all-night brain-suckin trips and using that for sexual release. Of course he doesn’t need you anymore. Who would with a deal like that?

Perfect set up for….

LSD Special Effects Not Seen Since “The Trip”

Not since Jacques-Louis David painted The Death of Marat has someone rocked a bathtub quite like Brian and Aylmer. The many methods of brain consumption got us thinkin. Hookin up with Brian was definitely Aylmer’s chance to swing. After years of servicing a senior Jewish couple, Aylmer sacrifices safety, security and all the kosher gray matter from Gottleib’s he can eat to jump ship for Brian, a 20-something hottie who’s sure to get the babes. And who can blame him? It’s like dating again after years of marital monogamy. You’re gonna wanna taste the rainbow (apologies to Skittles).

And the thanks poor Brian gets. After turning his bedroom into a giant blue TidyBowl and the back of his neck into a bloody Rorschach, Aylmer snakes his way up Brian’s shirt and into his heart, promising him a new life – free from pain, worry and loneliness, filled with colors, music and euphoria. The immediate payoff is a dayglo stroll through New York’s Mean Streets, complete with blinking Simon Says junkyard. It’s all fun and games until someone – mainly hookers and night waatchmen  – gets their brain eaten. Like any B-grade drive-in click, Henenlotter and Co. likely spent the bulk of the film’s $50 budget bringing the circuit-board proboscis of Aylmer’s brain-eating pie hole to life. It was worth it. Just remember – never cross the blue and white wires or you’ll end up french fried.

Before you know it, Brian is in over his head, trying to break the addiction and sweating it out in a seedy motel room – complete with chocolate-milk projectile vomiting, hairy ear scarves and bloody fire hydrant effects – while Aylmer taunts him with show tunes – all voiced in dulcet tones by John Zacherle. (That’s right Joe Bob, I said dulcet. Lest you wanna punch me in the nose, may I recall your use of pablum during last week’s Maniac commentary).

With that velvety voice, Zacherle could read you a bedtime story, croon a vaudeville tune or taunt you to the edge of electric, blue-juice addiction madness injected straight into your lasagna bowl just so he can eat hooker brains. I cannot get Aylmer’s voice out of my head. And after Brain Damage, let’s just say I’m glad that the three guys I work with named Brian can’t read my mind during our next conference call.

Joe Bob said it best: You can look through a thousand exploitation films, gore films, horror comedies and you won’t find a sequence as full of brilliance as Aylmer and Brian in the fleabag hotel. Brian inevitably cracks and shortly after we learn the secret: Aylmer goes way freakin back and you cannot feed him human brains or everything you cherish in life – including your girlfriend on the subway and yourself – will surely die.

When faced with the prospect of returning to a life filled with deli-grade non-human brains and The Life of Brian, there really is no choice. Aylmer bites the brains that feed him but makes the wrong choice, underestimating just how bitter a jonesing Hebrew can be as Morris strangles the life right out of him – leaving Brian high, dry, and the perfect host for what looks like – in a literally brief and shining moment – a new beginning for Aylmer. Unfortunately both Aylmer and Brian die. The end.

Joe Bob always honors his drive-in heroes. From my own experience, I know that Henenlotter is a man who makes movies that non-Mutants would likely find unwatchable. Because of Joe Bob, I know that Henenlotter is an uncompromising filmmaker, a master-league film historian and a strange little person who’s still doing things the drive-in way. For another great tribute to Henenlotter, be sure to check out Darcy’s podcast featuring her fantastic interview with the man himself.

Next Up: Mr. Nagy paints the drive-in rosso…