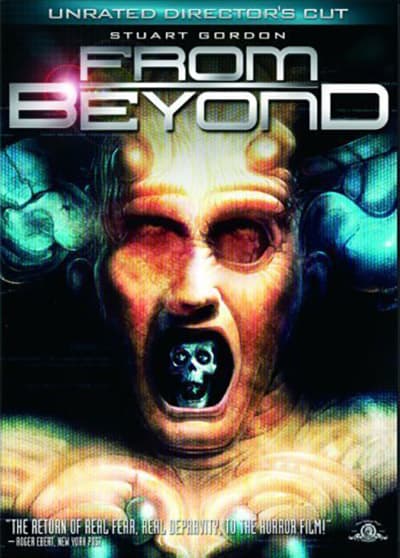 Last Call | Retro Review: Our pal Stuart Gordon got even kinkier when he headed “From Beyond”

In memory of the passing of the great drive-in director Stuart Gordon, we re-publish Joe Bob Briggs' review of the black leather-and-glopola classic "From Beyond," but first, a budgetary lesson about how the U.S. economy works.

In memory of the passing of the great drive-in director, we re-publish Joe Bob’s review of the black leather-and-glopola classic, but first, a budgetary lesson

Editor’s note: This column was originally published on Feb. 9, 1987. A few things have changed since then. The national debt is a touch bigger.

How to balance the budget:

Right now we have forty bucks in the bank. That’s $40.

Fortunately for this great nation of ours, these are the EXACT SAME PROPORTIONS as Joe Bob Briggs’ checking account at the Farmer and Merchants Building and Loan in Grapevine, Texas. You’re wondering to yourself, “How do I do it?”

In other words, let’s start running this COUNTRY the same way we run our FAMILIES.

Speaking of chaining people to the wall, “From Beyond” is the greatest drive-in horror flick of the year, made by the same people that put out last year’s Drive-In Academy Award winner, “Re-Animator,” and featuring the best slime glopola vomit effects since “Parasite in 3-D” in 1982.

What we got here is a couple of scientists that like to dress up in slick black leather, turn on a giant green tuning fork and wait for the vibes to ENLARGE a gland in the middle of their foreheads which is where you feel sex.

Too bad, though, cause as soon as you do that, these invisible snake fish start eating your face, and if you leave the tuning fork on long enough, Protoplasm Man jumps out of a closet and bites off your head like a gingerbread man. All this stuff happens BEFORE THE TITLE OF THE MOVIE COMES ON.

The rest of the flick is about how Jeffrey Combs, the scientist who doesn’t get his head bit off, and Barbara Crampton, the bimbo from “Re-Animator,” and a pro football player named Bubba all go back to the haunted condo and turn the giant tuning fork on again “to recreate the experiment” to cure all the schizophrenia in the world.

Pretty soon we got snake fish, insect heads, protoglopola slime monsters and a whole lot of green syrup oozin out of body parts.

But here’s the good part. Once you turn this machine on, you can’t RESIST it. You LOVE it. All you wanna do is dress up in spiked heels and pinch your gills. In other words, we got Pervert Fu.

Drive-In Academy Award nominations for Ted Sorel, as the evil insect-head, blubber-body Dr. Pretorious, for sayin, “No! I want to see more than any man has ever seen!”; Jeffrey Combs, as the kid scientist who survives, for sayin, “The five senses just weren’t enough for him anymore”; Ken Foree, as Bubba Brownlee the bodyguard, for barfin on camera and sayin, “It’s changing us, Doc, all of us, and not for the better”; Barbara Crampton, as the crazed nympho shrink thrill-junkie, for sayin “This could be the first step in curing schizophrenia”; and Stuart Gordon, the director and new drive-in master, for ending the movie with the words “It ate him.” Four stars.