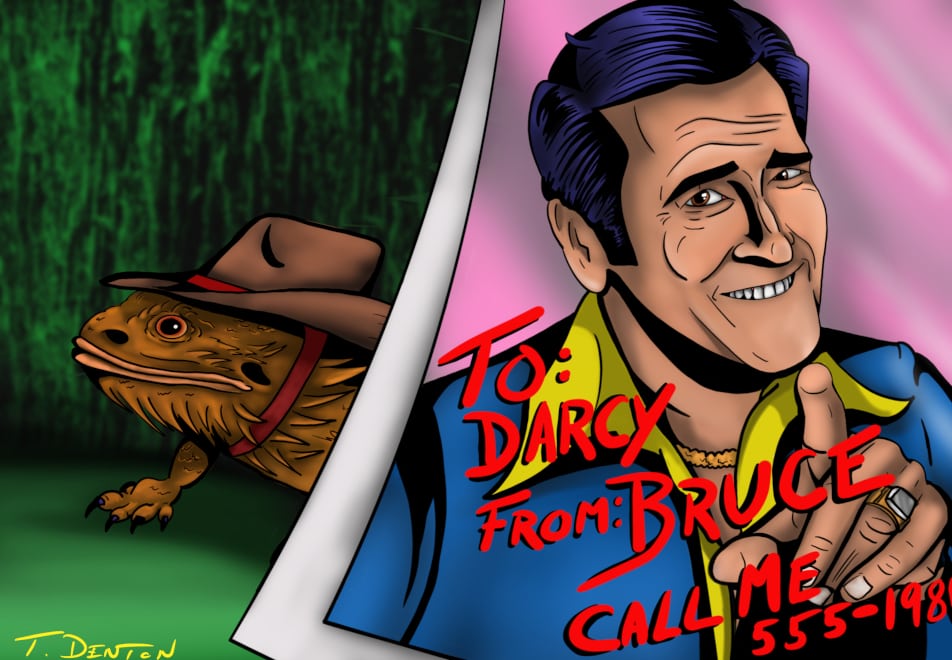 Two four-star drive-in flicks that are socially relevant even 30 years after their release and two super special guests — Bruce Campbell and William Lustig — keep Season Three firing on all cylinders.

Bruce Campbell as a guest? The only thing more groovy for Darcy would be an autograph from a guy whose name rhymes with Ron Napkins. (Art by T.J. Denton @TDenton_1138 on Twitter)

We got a double helping of Robert Z’Dar getting all maniacal in the Big Apple (even though the flicks were mostly shot in El Lay) as two street-savvy New Yorkers — the late Larry Cohen (It’s Alive, Q the Winged Serpent, The Stuff), who wrote the flicks, and William Lustig (Vigilante, Maniac), who directed the flicks — unleashed the brain-dead-but-not-quite-a-zombie-but-he-kind-of-is cop Matt Cordell on an unsuspecting populace after getting together in the early 1980s at a California coffee shop.

And not only did both movies featured in Week Six-o reach the four-star threshold, we had two LEGENDARY (we don’t throw that term around here lightly, even if it is in the LDI theme lyrics) guests.

Bruce Campbell, genre legend and the framed good (well, he’s not THAT good in this one) guy in 1988’s Maniac Cop, shot the breeze with JBB for the first time in 25 years for the first feature, and Lustig, blessed with an encyclopedic film knowledge that Joe Bob ranks up there with Frank Henenlotter and Eli Roth, also showed up via Yuki’s super satellite setup to hold court about the 1990 sequel.

Us Mutants did not have to be psychic (most of us are not) or be dressed up like you were going to attend a Renaissance faire to have a good time (some may be). In fact, Shudder did us the most-gracious favor of telling us who the guests were going to be beforehand, so it was not a terrible stretch to figure out what we were going to watch as the minutes counted down to 9 p.m. EST live on Shudder, and the whole dressing up in medieval chain mail is a personal choice that can be made at any time, not just on Last Drive-In nights.

Maniac Cop gave the opportunity for Joe Bob to give a mild singe to Darcy and her idol Tom Atkins by initially omitting the mustachioed hero of the Halloween Sequel That Shall Not be Named If I Want to Keep Writing for This Site from the list of drive-in marquee names in the flick. Indeed, Bruce, Laurene Landon and Richard Roundtree could conceivably be ranked ahead of Atkins. (Hundra, which was Landon’s major starring vehicle, is awesome and JBB’s review of Hundra is even more awesome). But yeah, putting William Smith over Atkins — them’s fighting words for some in the cabin, even if Smith did play Arnold the Terminator’s dad in Conan the Barbarian.

And Maniac Cop did get rolling pretty quickly — three dead bodies in the first 10 minutes — before Bruce Campbell shows up in his first non-Sam-Raimi-helmed role to fight with the prominently chinned Z’Dar’s “Jason With a Badge” in the drive-in’s greatest Chin Off in the history of ever.

Here are those totals, thanks to Shudder, in case you were curious:

Campbell shared some little-known facts about his career and the production of Maniac Cop. For instance:

BTW, Darcy did get a measure of revenge for the early Atkins crack, as she dropped some rapid-fire knowledge on JBB when he thought he was going to get another one over on Tom’s No. 1 Fan.

The sickest burn, though, came at the end of the night with the amazing stunt work courtesy of coordinator Spiros Razatos in the climactic final scene of Maniac Cop 2. Described by JBB as “the best flick of 1990,” it surpassed the record established by Swamp Thing in 1982 for Meritorious Execution of a Stunt Flambe for Use in a Drive-In Flick, capping off the Drive-In Totals that were as follows (hat tip to the Shuddering Twitterer):

Lustig’s enthusiasm for film practically leapt off the screen in the end product and in his interview — you can tell that from the fact that when he’s not directing or producing movies, he’s decided to preserve and respect films that might have been disregarded through his Blue Underground label.

He also shared some knowledge that he gained as a filmmaker — telling folks that he’s OK with openly borrowing inspiration from other movies that he liked. For instance, he didn’t like how a scene in Jackie Chan’s Police Story didn’t match up with where he would have taken the scene in his mind, so Lustig did that version in one of his own movies.

Lustig also has an eye out for character actors who can give a role a bit more distinction (it helps to know when they’re off to offer them some last-minute work), so we get to see something like, oh, future Machete star Danny Trejo lying on a cot in one part; Leo Rossi’s intensely researched performance as psycho Turkell; Clarence Williams III (Mod Squad, I’m Gonna Get You Sucka) or Charles Napier (Blues Brothers, practically every TV show from the mid 1970s to mid-1980s) showing up.

But he also talked about the not-so-glamorous and more maddening aspects of actors. One got into a trailer-measuring contest with another. Bruce Campbell was going through a rough patch and sought either more money or an early demise for his character. Lustig also had to take some chances by saying Robert Davi was already attached to the film before he was actually signed, sealed and delivered.

Despite the production hurdles, Lustig is proud of the sequel, saying it was his greatest flick and where he truly hit his stride as a filmmaker — it was “like going to war,” he said. “And we got it done.”

Even 30 years out from their release, the Maniac Cop flicks remain supremely relevant when examining the societal aspect of law enforcement running amok — the folks-on-the-street segments in the first flick could have been shot a week ago instead of in 1988.

Another installment with a different Maniac Cop (Z’Dar passed away in 2015) probably could work in the right hands, but it’d need a deft treatment to navigate the thin blue tightrope between preachiness and drive-in greatness. Nicholas Winding Refn (the original Pusher trilogy, Drive andThe Neon Demon) has been associated with an announced TV show that would move the setting from NYC to El Lay. We shall see what transpires.

But, if that doesn’t work out, the folks at Shudder and Fangoria both are into producing original features these days – can we get a coin flip here? One of you can do the fourth Re-Animator and one can do the fourth Maniac Cop. A Mutant can dream, right?

We’re heading down the home stretch – see you next week!