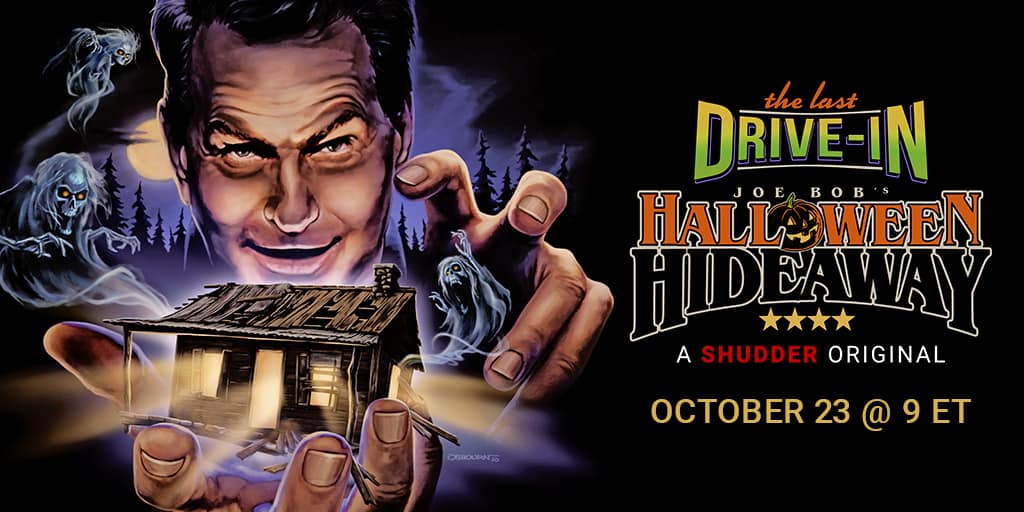 Halloween Hideaway: Recapping What Happens When the LDI Crew is Stuck in a Cabin in the Woods

If you missed it live or want to relive it, here's a recap of The Last Drive-In Halloween Hideaway special that Shudder showed on October 23, 2020.

Hunkering down is no picnic during a pandemic, especially when a certain demand isn’t met …

When we last saw our intrepid crew from The Last Drive-In back in August, the world hadn’t gone to as much heck and the Hell Year that is 2020 was slightly less hellish.

Way back when, oh, in those halcyon glory days of two months ago, Joe Bob, Darcy, Austin, John, Yuki and Ernie could have even guests over. Remember then? Heck, they could have umpteen guests over in their pajamas, dontcha know?

But, yeah. things got worse, and so the LDI folks were forced to pack up as much whiskey, food and satellite equipment as they could haul, snag Ernie’s terrarium and head on out to New Jersey. Cause where else is safer to hang out during a pandemic than where the original Friday the 13th was shot?

To be sure, a certain segment of the Mutant Fam (led by Darcy, who’s been known to sport a Tom Atkins shirt herownself) wasn’t happy that they didn’t get to see that two-star Invasion of the Body Snatchers redux (Joe Bob’s rating and description, not mine) and Atkins romance Stacy Nelkin as kids get their heads mashed into goo by masks infused by the power of Stonehenge.

And yes, the Mutant ire may have been rightfully amplified by the clue that the flicks to be featured in Halloween Hideaway both featured “homicidal druids.”

But when the Mutants think they have all the answers, JBB changes the questions, just like his old pal Roddy Piper used to. It’s his right as the world’s foremost, greatest and legendary drive-in movie reviewer to do so. And besides, if you don’t keep the audience’s blood pumping a little bit, they might get complacent like a U.S. diplomat wondering if his son is truly the Antichrist.

So next special, keep in mind the following –

Rule Number Uno: Don’t believe what you see in the posters.

Besides, wouldn’t you rather see something that they haven’t hosted?

I’m in that camp to be honest and was pleasantly surprised by the selections for this year’s Halloween double feature. I hadn’t seen either Haunt or Hack-o-Lantern. I hadn’t even heardof Hack-o-Lantern, which, judging from the title and era, I would have expected being some kind of Troma-type flick with either a guy in a pumpkin mask killing trick-or-treaters or a giant rolling pumpkin monster that shot out knives or other implements during a night-long killing spree (Tagline: This time the pumpkin smashes you!).

But when you bring up something as sensitive and polarizing as Halloween III in the midst of a pandemic when people’s nerves are already frayed, you can’t really blame its fans for lashing out.

Heck, five minutes after arriving at the LDI Cabin in the Woods (leased for nine months), Joe Bob had the nerve to ask Darcy to stock the kitchen (kudos to John Brennan for stepping up). You could tell that things were gonna get ugly between them in about four-and-a-half hours. Never mind that Joe Bob and Austin are members of the Order of the Arrow and follow the motto of being prepared to survive no matter what (except when they forget stuff).

The flick is the cautionary tale from Scott Beck and Bryan Woods about visiting that secluded scare attraction with just one Yelp review that donates part of its proceeds to the American Red Cross. Haunt featured creeps in a mutilation cult mutilating visitors and — even more heinously — stealing their smart phones.

It had a couple standout kills (the pitchfork through the head was especially impactful) and we did get to meet Mitch, that all-too-helpful haunt actor who admits to the visitors that “We’re a little extreme here, but safety is a priority.”

And as the first feature rolled, Joe Bob got stalked, some of the crew got fed up and left, making Austin cope with too much to do and not enough bodies to help. Yuki went up a tree to set up a satellite feed for a yet-to-be-known purpose (can a Zoom call with Mangled Dick Expert Felissa Rose be in our future), and Brennan started flinging knives.

Darcy reminded Joe Bob that he needed to get a costume on in time for the second feature, and also took over Yuki’s customary job as The One Who is Bequeathed the Bolo for Silverfication (not to be confused with He Who Walks Behind the Rows) since he was still up in the tree messing with the satellite.

The friction among the cabin mates grew even more pronounced in feature two, as did the rage online and onscreen when it became clear that instead of Halloween III, the second feature would be Hack-o-Lantern, made by an Indian director who decided 10 years was a long enough gestation period for his follow-up to a seminal slasher movie.

Course, as Joe Bob revealed. Jag Mundhra never got around to watching the original Halloween, (or if he did, he didn’t take real good notes), so what we get in Hack-o-Lantern is a grandpa played by a bit part actor from Blade Runner who tools around in a 1980s Toyota pickup hauling pumpkins and he also happens to be Satanic, run a cult and brand various ladies’ posteriors with pentagrams. Not quite in the original John Carpenter vein, not even in the Halloween III vein, but still worth three stars with these

People on the web were raging about it since their expectations were dashed, but I have a feeling that more Mutants will appreciate this strange, direct-to-video oddity once they get over the fact that Tom Atkins isn’t in it and a woman dressed up as a tossed salad for her Halloween party costume was.

Cause, let’s face it — as proven by the live Instagram chat they did post-special, H3 superfan Darcy & Joe Bob mended their differences (getting dragged into Crystal Lake by a hockey-mask-wearing mailgirl’ll do that), post-Hideaway.

It’ll be fun to see how things in the Hideaway progress, especially when Yuki gets that satellite dish set up, and we’ll be here to check it out with you!