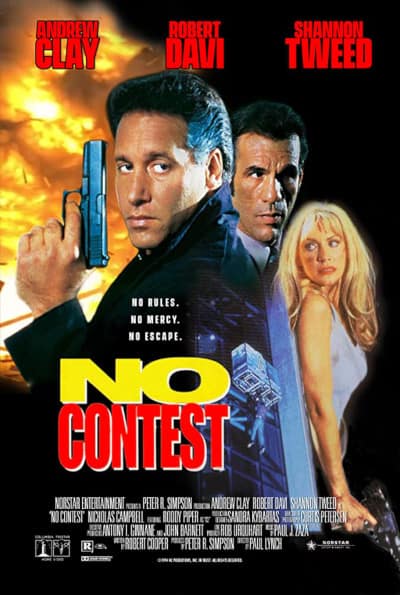 An unheralded thriller from the 1990s, "No Contest" starred Shannon Tweed, who did kung fu for this one, comedian Andrew Dice Clay, who took folks hostage, and Robert Davi, who did the Robert Davi thing.

The stars were aligned for mid-1990s greatness with the actors above AND you get Robert Davi in this one, too!

All right, that’s enough. Let’s stop stealin one another’s football teams. I was just gettin used to the Carolina Panthers, for God’s sake, and the Jacksonville Jagwires, and now they’re expecting the words Nashville Oilers to come out of my mouth? Heck, I still can’t say “Indianapolis Colts,” much less “St. Louis Rams.”

Have you ever seen the front page of a local newspaper on the day a city either gains or loses a professional football team?

They didn’t use type this big when Kennedy got shot.

I know it’s a Big Deal and everything, but come on, it’s not THAT big of a deal.

The cities that lose the teams go around in shame for weeks, like they just got word from the Mayo Clinic that they’re hopelessly bald and impotent. Then the shame turns to anger, as the blame the evil owner for caring too much about Money and not enough about Fans. But then they realize that, hey, there weren’t that many fans, and so they start blaming the fans. “Why didn’t this city support this team?” Stuff like that.

Look. It’s not such a bad thing.

Look what happened in El Lay. They lost both their football teams in one year, and so the result is . . .

You can watch all the pro games you want on TV! You don’t have to watch the Rams or the Raiders anymore, or, what’s worse, get blacked out because the Rams and the Raiders failed to sell all their tickets that week.

But look what goes on in New York, which has two football teams, two basketball teams, two baseball teams, and FOUR goldurned hockey teams. THOSE ARE THE ONLY TEAMS YOU CAN WATCH ON TV! Every Sunday afternoon, it’s the Jets and the Giants, the Giants and the Jets, causing massive numbers of people to decide that they’d rather take the wife to the botanical gardens.

But losing your football team might be good for another reason, too.

It might be that nobody went to the games because there are BETTER THINGS TO DO in the area.

Why are the smaller cities taking teams away from larger ones?

Because the larger ones have more people who DON’T LIVE OR DIE ACCORDING TO THE WEEKLY FOOTBALL SCORE. I mean, they might like football. They might even love football. But sometimes Pavarotti is in town, or Courtney Love.

There are Other Things To Do.

I’m surprised I have to explain this to you people.

Speaking of American institutions, this week’s flick has a scene destined to become immortal — Shannon Tweed and Andrew Dice Clay in a kung-fu death struggle. After they’ve both bloodied a few body parts and broken a few bones, Shannon says “Don’t you know you’re not supposed to hit a woman?” And Dice says, “I hit everyone equally.” And then the kung-fu continues.

I speak, of course, of No Contest, starring the Diceman as an international drug dealer who infiltrates the Miss Galaxy Pageant, takes the five finalists hostage in a hotel penthouse, gruesomely executes several dozen innocent bystanders, and demands $10 million in diamonds or else he’s gonna waste the beautiful daughter of a weaselly senator.

What Dice doesn’t realize is that one of his hostages is Shannon Tweed, the famous female kung-fu movie star, and she’s been doing some upper body work, if you know what I mean and I think you do. The other thing he doesn’t know is that Robert Davi is downstairs in the SWAT team van, waiting for a chance to take out some babes.

What we’ve got here is basically “Die Hard With Babes,” with a special appearance by Roddy Piper as Dice’s killer henchman. Tweed, Clay, Davi and Piper — does it get any better than this?

Thirty-three dead bodies. No breasts. (Shannon Tweed is in the movie, and there are ZERO breasts. Go figure.) Three exploding cars. Exploding beauty contestant, with crash and burn. Groin-shooting. Knife-throwing. Steam face-scalding. Eye-gouging. Steel spike through the body. Ice-bag face-bashing. High-rise swan dive. Throat-cutting. Automatic-weapons Jamboree. Kung Fu. Headbutt Fu. Drive-In Academy Award nominations for Shannon Tweed, as the ex-beauty-contestant-turned-martial-arts-movie-star, for saying “You better wipe your lip — there’s a trace of venom showing”; Robert Davi, as the tight-lipped bodyguard, for saying “Don’t show your fear, and don’t b.s. him”; Keram Malicki-Sanchez, as the techno-geek terrorist with a burr haircut, for saying “Sharon Bell — she’s like a Bruce Lee with boobs, man!”; and Andrew Dice Clay, as the terrorist, for saying “I don’t understand — I kill several innocent people, threaten to blow up a building, and the police still don’t take me seriously.”