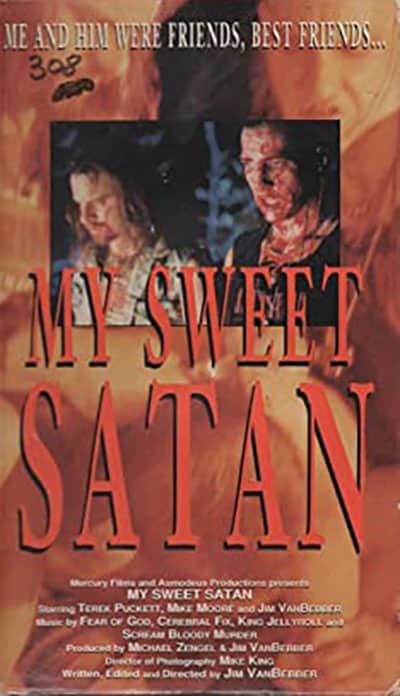 Last Call Blog | Retro Review: Lookin at what Van Bebber was up to after ‘Deadbeat’

Joe Bob checked out one of "Deadbeat By Dawn" director Jim Van Bebber's later efforts — "My Sweet Satan" — in the mid-1990s. It has a scene that gets a perfect 100 on the Vomit Meter. Check it out.

Joe Bob checked out the Dayton, Ohio, director’s ‘My Sweet Satan’ in 1995 as well as a couple other follow-ups

Editor’s note: This review was originally syndicated on April 10, 1995. Some stuff has changed since then.

“What you been doing?”

“What you gonna do this week?”

“Wanna go to the movies?”

You got friends like this? You ever notice that people whose whole life revolves around the word “party” NEVER ACTUALLY GO TO A PARTY.

If you were ever to say, “Great. Let’s party. Where’s the party?”–then THEY would have to say, “There’s not any party man. We’re just gonna, you know, PARTY.”

So there’s a whole lotta partying going on, but NO ACTUAL PARTIES. So when did the word “party” start meaning the same thing as, “I think I’ll sit around on my butt and get drunk and watch TV and not go anywhere, and maybe later some other people will come over and sit around on THEIR butts, right next to my butt, and I can bum cigarettes off em”?

In the sixties they had this phrase they’d use. “Wild party.” It was hip. It meant drugs, women, booze, and those ladies in the silver mini-skirts who got wasted and danced nekkid in the moonlight on Fifth Avenue terraces. Every sixties comedy has a “wild party” scene.

Then party became a word used by hookers: “Would you like to party with me?”

Then it became a sorta kinda sometimes sexual invitation, as used in singles bars: “We were thinking of partying later.”

Then, sometime in the eighties, it became a different word for guys and gals. Girls say “Let’s party,” and they generally mean “Let’s dance.” MUSIC is necessary. There is no party without music. But when guys say it, the generally mean “Let’s get drunk and/or stoned and WATCH the girls dance.” So music isn’t absolutely necessary, but it helps.

And now, in the nineties, it means “I don’t have anything to do. I’m bored.”

“What are you doing tonight?”

“I can’t think of anything else.”

“Okay, we’ll party. But tomorrow night let’s DO something.”

In other words, “party” now means “I’ll get a six-pack. Anybody want pizza?”

This is weird, don’t ya think? Why am I the only person that notices this stuff?

Anyhow, one reason I was thinking about this is that I’ve just been watching My Sweet Satan, the incredibly gross tape of Jim Van Bebber’s recent short flicks. Van Bebber is the guy who made Deadbeat at Dawn and instantly became the greatest filmmaker in the history of Dayton, Ohio, and then he’s continued to portray Dayton as the center of the punk universe, full of creepy gangs, dead-end dopers, and violent Charles Manson types of every description. When I sent this tape to a friend, it was SEIZED by Canadian Customs. There are scenes in Van Bebber’s movies that make your body HURT even when you’re just thinkin about em later.

The title short is based on a real-life murder/suicide case where a creepy drug dealer took a whiny hanger-on out into the woods, got him high on LSD, accused him of stealing money, then stomped his head to a pulp. (This particular scene gets a perfect 100 on the Vomit Meter.) They threw the drug dealer in jail, but he hanged himself with some bathroom towels before they could try him.

The tape also includes Roadkill: The Last Days of John Martin, starring Mark Gillespie as a grungy meat-carver who lives by himself on a farm, just like notorious cannibal Ed Gein of Wisconsin, and spends most of his time drinking beer, channel-surfing, talking to himself, and admiring the human head he keeps in a cage. When he gets bored, he hits the road, searching for people with car trouble, if you know what I mean and I think you do.

All of Van Bebber’s stuff is based on true stories, but the only actual documentary he’s ever made is called Doper, also included on this tape. It’s basically a camera following around after a couple of hard-core weed addicts, the kind of guys who operate heavy machinery and actually believe they do a BETTER job if they’re totally stoned by the time they get to work, get stoned again at lunch time, and spend every night drinking beer and doing more dope. As one of em says, “If you smoke a joint, man, you can handle almost anything.”

Van Bebber writes, produces, directs and stars as the satan-worshipping “Acid King” drug dealer with the scary haircut, and it’s a performance you’ll never forget, but it’s not HALF as terrifying as the two real-life dopers. At the factory where they work, Van Bebber interviews little old ladies who go on and on about what “good kids” they are and how great their work is. Newt Gingrich, in other words, would love em.

It’s the nineties, man, and Van Bebber has figured it out.

Drive-In Academy Award nominations for Jim Van Bebber, for doing it the drive-in way, and for playing the scariest drug dealer in history, for saying “How does it feel to have something taken off you?” as he burns a guy’s shorts in a campfire; Mike Moore, as the whiny little weasel who gets carved up in the woods; Mark Gillespie, as the entrail-eating psycho who screams “Why are you doing this to me?” for no reason; Maureen Allisse, a great screamer, as the nekkid caged victim in Gillespie’s slaughterhouse; Bill, the guy who got kicked out of the Marines for dope and has been doing it steadily for six years, for saying “I’m not gonna do it forever — or maybe I will, who knows”; and Barry, the forklift-driving doper who wins the Employee of the Month plaque while stoned, for saying “Live for youself –live today and then worry about tomorrow when it gets here — that’s the way I go.”