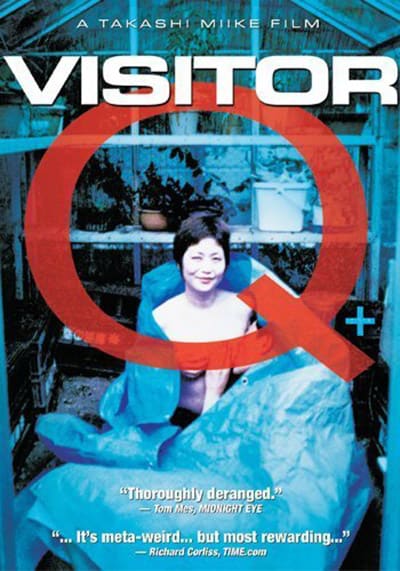 This isn't a pile of scrap metal motoring around intent on causing world destruction like in "Tetsuo: The Iron Man," but Takashi Miike's "Visitor Q" has its own take on body horror and it includes lactose, lots of lactose.

Editor’s Note: This review was originally syndicated on June 19, 2002. Some stuff has changed since then.

Once every decade or so, you get zapped with a flick that’s so cringe-inducing you start to wonder whether it was actually made by a maniac. Remember how shaky and grainy The Texas Chain Saw Massacre was? I had to actually meet the soft-spoken director, Tobe Hooper, before being fully convinced he wasn’t a homicidal lunatic.

At any rate, that’s the way you’re gonna feel when you see Visitor Q, which comes from Japan, where everything lately is more intense, more shocking, and more just plain disgusting than films from anywhere else. Those people are downright kinky.

The strangeness starts from the very first scene — this is gonna be tough to describe in the newspaper — in which a defrocked reality-TV producer (yes, that’s what I said) takes his video camera to the workplace of his teenage daughter, who’s a prostitute, and photographs her coming on to him for his new show on “what’s wrong with Japanese youth.” She’s an aspiring journalist herself, so she snaps photos of Dad at the same time he’s photographing her, and let’s just say everything gets very bizarre.

Dad then waits on his train at an elevated subway station, and while doing so, an intense goateed man in a flowered silk shirt walks up behind him, picks up a rock, and bashes Dad’s skull with it. A few scenes later Dad is bandaged like a samurai, walking down the street, when he senses something behind him and gets a wild look in his eyes. Sure enough, Silk Shirt is back, and he bashes him unconscious a second time.

Dad does what any reasonable middle-class Japanese businessman would do. He takes the attacker home for dinner, and the two men chow down as Dad’s teenage son beats up his crippled mother for no apparent reason, leaving red welts all over her body and forcing her to shoot up some heroin to feel better that night.

And this is only the opening of the movie. Without giving away the plot, I’ll just say that Dad invites Visitor Q (the man with the head-bashing fetish) to move in with the family while he shoots a reality-TV series on the bullies who terrorize his son by beating him up once a day and terrorizing the family with a nightly fireworks assault on the house. But when his attractive young female reporter tells him she thinks it’s a silly idea for a show and refuses to appear on camera, Visitor Q takes over the digital camera while Dad proceeds to beat her to a bloody pulp in a nearby ditch and then pack her body into the trunk of his car– for use in a future video production.

That particular video production is the point at which you’re likely to think, “Can they even do this in a movie?”

And you thought Snuff was bad.

This movie is sick, sicker and sickest. I loved it, of course. You can see it at any film festival run by degenerates.

Let’s take a look at those drive-in totals: