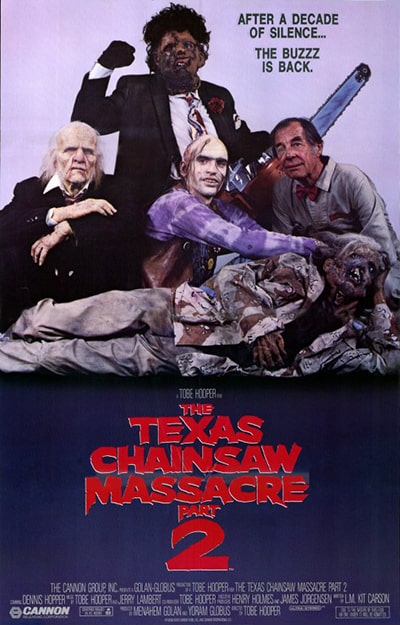 Joe Bob's feature-film de-butt actually got cut. The full story is in the long out-of-print "Joe Bob Goes Back to the Drive-In," but he was still stinging from being chopped out of "Texas Chainsaw Massacre 2" when he reviewed it.

JBB got chopped twice in ‘TCM 2,’ once by Leatherface and then again by the producers

Editor’s Note: This review was originally published on Sept. 19, 1986. Some stuff has changed since then. This one’s shorter because Joe Bob had a whole bunch of college football predictions in the first part of the original column plus there’s this whole theme of choppin going on…

Speaking of lost causes, I decided to end my three-week boycott of Saw 2, the movie that used to have me in it but was butchered by communists before it got released.

(Actually eight copies of the flick got shipped out of El Lay with my scene still in there, so if you see one of those, you’re allowed to add one additional star to this review.)

The most famous cannibal family of the past 20 years is out collectin Yuppie Meat on Texas/OU weekend in Dallas. The only problem is, this bimbo dee jay records the sound of a guy gettin his brain chainsawed through the sunroof of a Mercedes cause the guy happened to be requesting a song by Humble Pie on his daddy’s cellular car phone at the time.

So this new evidence gives Dennis Hopper, the well-known acidhead Texas Ranger, the chance to buy three Black and Deckers for himself and go after Leatherface.

I have to admit, I didn’t think Saw 2 had a chance — but Tobe did it again. Leatherface not only saws up a radio station, but he falls in love. His brother Chop-Top walks around carryin the skin of Edwin Neal, who didn’t get rehired for Saw 2, and fryin the metal plate in his skull with the hot end of a coat hanger.

Drive-In Academy Award nominations for Jim Siedow, the only star back from Saw Uno, who runs around rantin about the high cost of meat and telling his son “You got one choice, it’s sex or the saw”; Caroline Williams as the bimbo survivor, who almost equals Marilyn Burns, the greatest screamer in Saw history, but discourages Leatherface from slicing her head off by saying “I‘m trying to be open with you, it’s nobody’s fault. I just can’t do this”; Bill Johnson as the greatest Leatherface since Leatherface; Tobe, the master; Kit Carson, for writing lines like “Nam flashback! Nam flashback!”; Joe Bob Briggs for bein cut out of the movie for no apparent reason, and, of course, Bill Moseley as Chop-Top, for requesting “Inna Gadda Da Vida” and saying “A bonus body!” and “Bubb’s got a girlfriend!”; and as he bludgeons an innocent bystander to death, “Incoming mail! Incoming mail!”