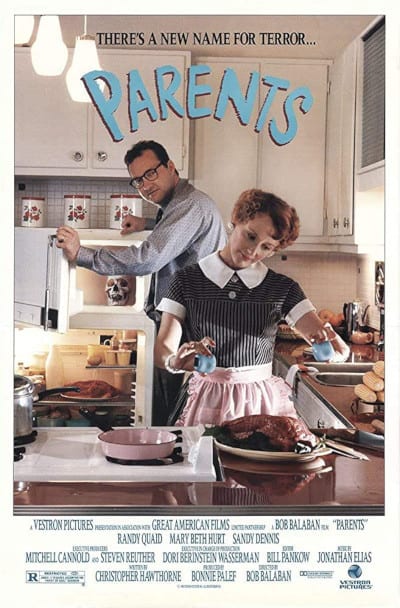 Last week on the Last Drive-In, we all saw cannibals Italian-style. This week's Retro Review takes the human munching into the realm of the beloved 1950s U.S. sitcom with "'Parents."

Editor’s Note: This column was originally syndicated on March 31, 1989. Some stuff has changed since then.

Before I tell you about “Parents,” one of the finest cannibal flicks of the 1980s, I thought I would give you a little background on my qualifications to review the movie.

I had parents. Several of them. I even knew a few of em by name.

They were hard-working pioneer stock. In fact, the women resembled stock. At night they would sit by the fireplace with their spinning wheels and sing old Hungarian folk ballads. None of em ever learned how to use a spinning wheel, though, and none of em were Hungarian, so people made fun of us all the time.

It used to make me so mad I would want to fight with the Swedish boys, or make fun of their shoes, but my father was a peaceable man, and he wouldn’t have it. I’ll never forget what he told me.

“Because I’m five-foot-three and weigh 115 pounds.”

“But, Daddy, the Swedes called us irrelevant.”

I used to ask my Mama, “Why did God make us irrelevant?”

And she would say “Hush, dear. It’s besides the point.”

I wanted to study the history of irrelevant people, try to figure out where we came from and what we had to be proud of, but when I went to the library they told me: “That’s a waste of time. Here, read this book on Swedish people.”

So one day I was determined to have it out with my parents — to know, once and for all, just where we came from and what we were good for. And so I waited until after dinner, when Mama was clearing the last of the kidney-dumpling Jell-O off the table, and I said: “Where did the Briggses come from? I want to know. Right now.”

And my daddy wiped the last of the Ritz-cracker casserole off his lip, looked me square in the eye, and said: “All right, you little rascal. You wanted to know? You’re gonna know. You wanna know where you came from, Mr. Smart-Aleck? Maybe you don’t think your parents are taking good enough care of you to satisfy Mr. High-and-Mighty here! Maybe you don’t realize that when I walk out that door every day and go down into the dirt mines, I’m trying to bring home enough money to put food on this table so that someday you can go to school and be an insurance adjuster! You have to know who the Briggses are! Is that what you wanna know?”

And that’s why I never did find out.

Speaking of families that need professional help, “Parents” is the story of a typical middle-class “Ozzie-and-Harriet” cannibal family in the 1950s.

Randy Quaid is an expert on “defoliants as a growth industry” at the local Toxico plant. Mary Beth Hurt walks around their Jetsons house in stiletto heels and conehead support bras, cooking meatloaf. Sandy Dennis is the beef-critter school psychologist with a face like Silly Putty. And all of them are trying to tell little Michael that he shouldn’t be having these terrible dreams about drowning in blood, and that it’s probably untrue that his parents are flesh-eating blood-sucking freaks.

Unfortunately, nobody believed little 10-year-old boys in the 1950s, so I’m afraid we have to sit through several “mystery meat” barbecues.

Drive-In Academy Award nominations for Randy Quaid, as the cannibal father, for saying, “We can’t make friends by telling lies, Michael” and “Eat your meat”; Bryan Madorsky, as the kid, for telling his grade-school class how to boil a cat, for telling the counselor, “You’re not a real grown-up,” for jumping into the deep freeze with his girlfriend; and Mary Beth Hurt, as the cannibal mom, for telling the counselor, “Well, he’s not much of an eater.” Four stars. Joe Bob says check it out.