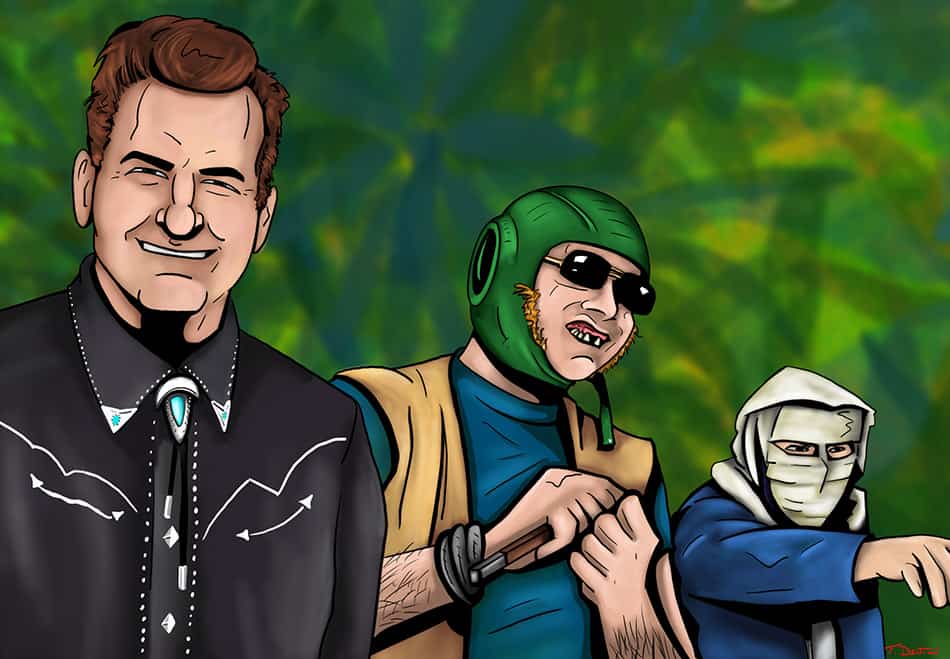 Hey everybody, it's the premiere episode of Season Three of the Last Drive-In, and here we go with a Troma flick chronicling New Jersey rednecks with mommy issues. And a director of some renown, Eli Roth, joins us too. Check it out!

New Jersey rednecks in the Deep Barrens have some unique fashion sense and mommy issues to boot, we learn in Mother’s Day. (Art by T.J. Denton @TDenton_1138 on Twitter)

The Last Drive-In crew already had regaled us with a charity auction for Christmas and putting a Valentine’s Day spell on us to tide us over, but it was time to get to the heart of the matter with the opening salvo of Season Three-o.

There’s an old saying out in Grapevine that Joe Bob adopted a long time ago after the 26th time Chubb Fricke ate 37 super dogs at the drive-in concession stand and blew out the rear shocks of JBB’s Toronado during the second show of a Chuck Norris double feature by trying to imitate Big Chuck and do a front thrust kick off the trunk. Every single time Joe Bob would get the Olds down off the blocks out back behind the trailer with a new set of Gabriel double-pump air-cushioned shocks, and he’d say, “If it ain’t broke, then I won’t fix it.”

Of course, it wouldn’t be broke for a while, but then he’d forget and then he’d go on and invite Chubb out again and then it’d be broke. These things happen when you hang out with the world’s oldest professional bowler who needs to maintain his weight in order to get the big guy strikes by rolling the ball really, really hard – but that’s another story.

So discerning Mutants no doubt realized that Episode Uno of this season might have had a bit of similarity to the second feature of the premiere of Season Two-o.

Remember? That was when we got to see Ralphus and Sardu and Chris Jericho and Blood Sucking Freaks. The only thing that got broken there were some people’s speakers when Mssrs. Jericho and Brennan ROCKED OUT talking about unique rigatoni.

So why not get another special guest of esteemed stature with impeccable knowledge about the featured flick to show up (appropriately distanced and appearing after Yuki got the proper trajectory to bounce the signal off satellite Thor 7 stationed above Norway) and enlighten us all, put our jaws on the floor and make us raise a large popcorn, a Lone Star or our beverage of choice in celebration?

But before we get to the director and guest star’s super fandom of the cinematic output of a Troma alumnus-turned-gluten peddler, Joe Bob had to lay down some ground rules for Season Three-o, namely that the whales probably wouldn’t be saved, there would be no outside aggravators, the season will go forth as a problem-free zone and yeah, they’re still in their cabin in the woods. (Yeah, thanks, coronavirus!)

We also have to have a slight rundown of the history of the Psycho Hag, which begins with an archetypal relentless sixth-grade rouged-up teacher JBB had, but then picks up cinematic speed with, of course, Mama Bates in Psycho, but since Hitchcock can kind of be considered indoor bullstuff and it was actually Anthony Perkins running around in the wig, it doesn’t really count in the annals of Drive-In Lore.

So, Joe Bob’s Cliff’s Notes of the Psycho Hag’s Drive-In History starts with Joan Crawford and Bette Davis feeding each other rodents in Whatever Happened to Baby Jane? Then Bette again in Hush Hush, Sweet Charlotte, then Joan again in Strait-Jacket, then 1971’s The Night Evelyn Came Out of the Grave, Ruth Roman in 1973’s The Baby, then 1987’s Flowers in the Attic, then maybe the zombified-by-a-Sumatran-rat-monkey mom in Peter Jackson’s Dead Alive (aka Brain Dead) and then there’s Diane Ladd and Olympia Dukakis in the 1997 Hubbie-award winning Best Flick Mother.

Mother’s Day — NOT the one with Jennifer Aniston — but the Tromatic one done by Charles Kaufman (brother of Uncle Lloyd) that Eli Roth showed at his bar mitzvah after they got tired of playing the rented arcade games fits squarely in this pantheon.

You’ve got a couple of Jersey hillbillies (Frederick Coffin — Ike, the tall one, and Michael McCleery — Addley, the greasy one) killing folks at mom’s (Beatrice Pons’) behest. You’ve got the mom worried about something out in the woods coming to get her. You get a New Jersey wilderness redneck training montage (complete with clipboard), and yes, the flick also features a woman getting brutalized after being forced to do an Edward Albee-style performance art scene on a handy park bench when all she wanted to do was go on a camping getaway with her two college pals and reminisce about that one time when they left the Dobber with his pants down on the ballfield.

So yeah, is it any wonder Eli’s the way he is, annihilating tourism for North Carolina, South America, Slovakia and Vegas and calls it “a masterpiece”? (And we love him for that.)

And, saving us a bunch of typing courtesy of our friends at Shudder, here are the Drive-In Totals in one handy-dandy GIF …

And not only did Eli let his love for this flick, warts and all, shine through, he also gave priceless advice about persistence when sharing stories about trying to write and secure financing for Cabin Fever.

And just for fun, he also explained the feminist motivation behind the scrotal mutilation at the end and gave the five-step process to a Backwoods Slaughter flick for anyone who wants to do one:

And, in a further display of Mutant cred, Eli decided to stick around as any devoted and committed Mutant would, and we were treated to his and JBB’s thoughts on slaughtered Realtors, basements with undead crying monsters dressed in Civil War-era outfits and, of course, fricking Bob, perhaps as hated as TCM’s Franklin. It’s House of the Cemetery and it’s feature Numero Two-o.

So let’s throw it over to Laura one more time.