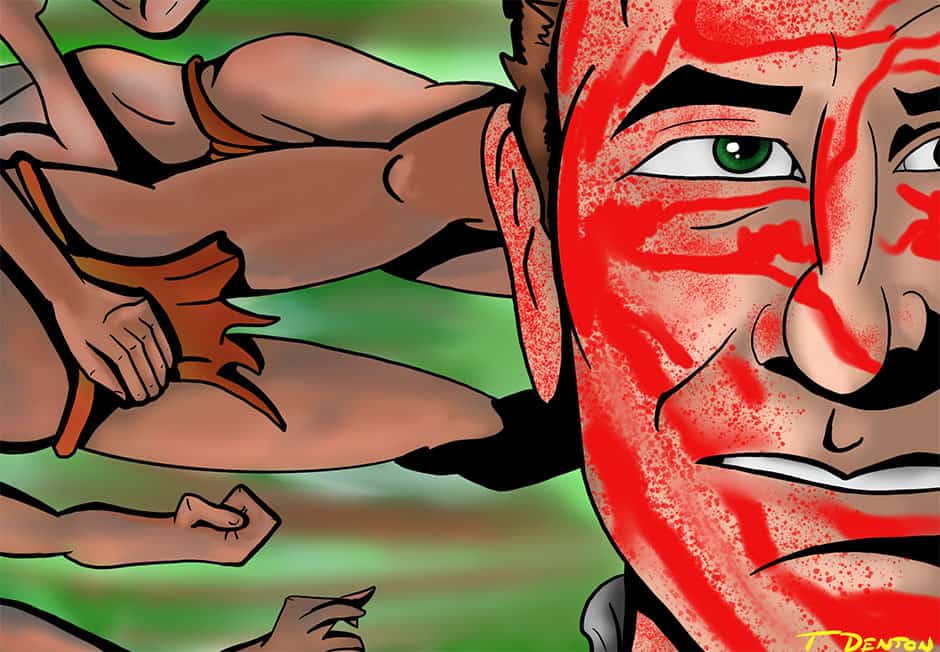 The Last Drive-In crew gets into the meat (or heart, or whatever bloody body part you choose) of the matter when it takes on "Cannibal Holocaust," a 40-year-old Italian cannibal flick that maintains an important role in horror movie history.

The controversial Italian cannibal shocker still has a bite to it (sorry, had to), even 40 years later

And hell yes, of course Joe Bob, Darcy and even Yuki(!) participated in a Last Drive-In barbecue contest because there definitely was a lot to sink a Mutant’s teeth into when talking Ruggero Deodato’s Cannibal Holocaust.

The 1980 release serves as the granddaddy of the found-footage flick that’s so commonplace today, and for that alone it deserves recognition. But with its on-screen animal killings, dismemberments, impalings and rapes, it’s earned revulsion as well. Multiple disclaimers in the 40(!) years since its release (Joe Bob even added one). The movie’s been banned, accused of being a snuff film, got Deodato put up on murder charges (he beat those) and animal cruelty charges (he didn’t beat those).

“You cannot show this movie without people getting crazy on your ass,” Joe Bob said before he rolled it.

It’s pretty much the best-made example of the dozen or so entries in the twisted cannibal subgenre Italian filmmakers pumped out like blood from the still-beating heart of one of the unsuspecting jungle victims from 1972’s The Man From Deep River until the late 1980s, where the flies had descended and the bones of the country’s film industry were just about picked clean.

The two main auteurs (if you can call em that) of the cannibal subgenre were Deodato and Umberto Lenzi and they alternated with flicks like Jungle Holocaust, Eaten Alive and Cannibal Ferox to name a few. All of em had people who should know better about going into the Amazon and encountering cannibals, real footage of animals getting killed (they said it improved box office returns in Asia) and then layering on gore effects of varying believability.

With a pig, a muskrat (“hog-nosed coon,” according to JBB) and a turtle the most gruesome casualties enshrined in the film (and let’s not forget the simulated rapes, dismemberments and ritualized torture), Darcy’s cosplay for Team Turtle at least brought a bit of levity to the situation, helping to allay Joe Bob’s fears that they were going to get hammered with complaints.

Some Mutants also did the right thing on social media, contributing to turtle rescue charities at JBB’s and Darcy’s behest and atoning for watching the flick.

And, despite Joe Bob’s opening salvo against the creation of fake “mystery meat,” we found out that Darcy’s tofu-veggie bacon barbecue won the LDI cookoff challenge over Yuki Nakamura’s Tokyo Surprise. JB’s turtle soup and muskrat sliders were dead last. Still, it wasn’t all disappointment for the man from Grapevine. In addition to the triumph that was The Last Drive-In Barbecue Showdown, the film did result in maybe the all-time greatest epic Drive-In Totals that took Joe Bob a grand total of three minutes and 10 seconds to get through:

As JBB said, it’s a dirty job and someone’s gotta do it. If you watched Cannibal Holocaust, shot in 45 days in the jungles of South America, you can check off one of the most controversial and important horror flicks ever made off your barf bucket list now.

But, if you didn’t watch it, we don’t blame you. That’s why it’s the most-disclaimered flick of all time, and why Shudder put Joe Bob’s segments on all by their lonesome, cause we all know those are friendly to all palates — carnivore, vegan, vegetarian and cannibal Mutant alike.