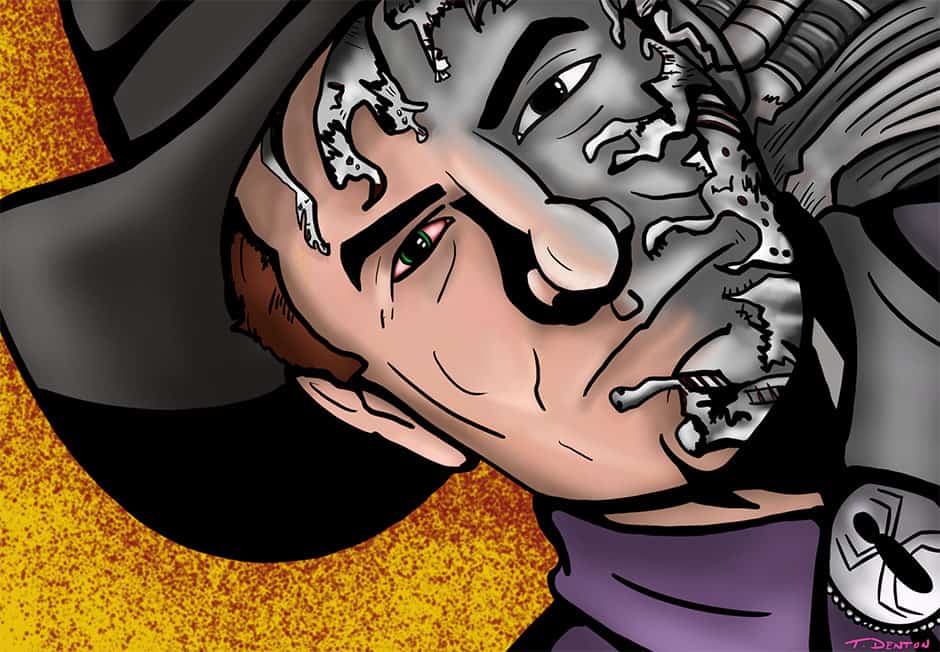 When metal supersedes flesh and the industrial consumes the organic, what next but global destruction? Tetsuo is so metal it turned Ernie into a metal fetishist.

After the white-collar Mayhem in Feature 1 so elegantly recapped by Laura in our first blog post for Week 7, we come to some industrial mayhem from the Land of the Rising Sun for Feature 2.

Like a gigantic rolling mass of about a dozen junked 1980s Toyota Corollas with busted-out windshields, rusted-out quarter panels and flat tires pushed down Mount Fuji, Tetsuo the Iron Man blasted into the collective consciousness of The Last Drive-In Mutant Family with all the subtlety of a 5-year-old tyke armed with a metal trash can lid and a ballpeen hammer who’s been told to make some music.

As a first-time viewer, I didn’t know what to make of it myself. But, when that thrumming soundtrack hit and the salaryman started sprouting industrial jetpacks from his heels like Hermes by way of Nippon Steel, I started getting caught up in the vibe. So did a certain bearded dragon, it seems.

Just take it from Joe Bob: “Doesn’t make a lick of sense.”

It reminded him of the punk rock-underground DIY aesthetic that he experienced in the 1980s, far from polished, intense as all get out.

And each scene from director Shinya Tsukamoto was a segment to experience rather than to just watch:

A mutant woman in glasses combats a guy riding the subway. There’s another woman in what looks like a metal brassiere playing hide the sewer pipe in the guy. There’s high-speed running around advancing behavior.

Even Felissa got in on the act, commenting on the industrial strength twirling mutant metal penis attack.

This observer got an Eraserhead via J.G. Ballard (he wrote Crash — later adapted by David Cronenberg and featured in Joe Bob’s Profoundly Disturbing) vibe myself.

Well, that happened. Now what’s next? “Would you like to taste my sewage pipe?”

All leading up to something, which was …

beyond the drilling of private parts, the sewer pipe colonoscopies and the accumulation of scrap metal on Japanese business dudes incited by metal fetishists, Tetsuo is truly about how the gradual and inevitable enclosure of the spirit of our selves through technology and fuels the war machine and dehumanizes us. As people experience repeated collisions of the organic and the metallic, our flesh is assimilated, scarred and damaged the flesh. The manufacture of industrial products only adds more power, heft and volume to the monolithic metal juggernaut that marauds and plows through our planet’s ecosystem without heed to the results. Yes, it may eventually accumulate some surface rust as it rolls through a town near you, but it’ll take much longer for it to rust away than for the flesh to die and rot.

Much like the closing transformation of a certain bearded dragon after he experienced Tetsuo, the flick also was a rapid experience (a bit more than an hour), but no less weighty.