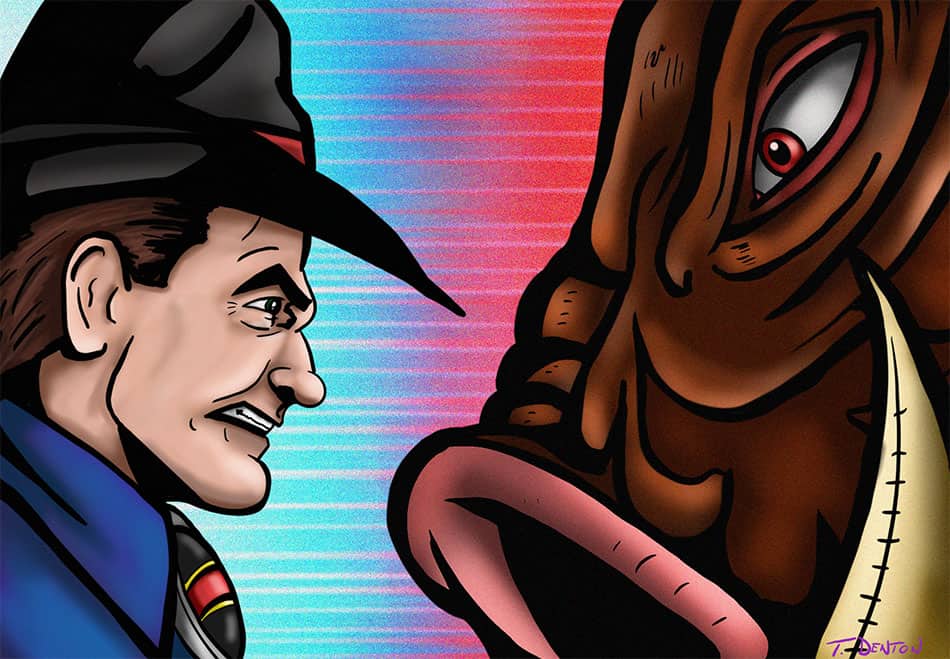 Joe Bob graced our screens in the usual spots and INSIDE the movies, including the unforgivable betrayal of a world premiere showing of "Hogzilla" and Darcy doing the Drive-In Totals.

For the second-to-last episode of The Last Drive-In’s Season Numero Two-o, we got a double-barrel blast of Joe Bob’s acting prowess with his surprise cameo in the anthology film Scare Package and in the long-dormant killer-oinker-on-a-rampage flick Hogzilla where JBB got his name above the title.

Scare Package, like all anthology films from now since forever, had its strong and weak points with segments including “sad transforming goo guy in the woods,” “a Mike Myers who’s totally disarming with a Tucker and Dale string of bad luck with people dying around him,” and “post-modern feminist revenge slasher body horror” has the most Drive-In Totals segments ever given out — one total for all eight parts of the anthology.

We also got to hear JBB’s true feelings on what the use of the modern film analysis concepts of “tropes” and “meta” signify to him. Short version — “I’m a jackass” and “I’m a jackass who says ‘trope’ a lot.”

So here’s the epic rundown on the first flick, including that hero turn for our favorite horror host in the finale.

Segment Uno — Cold Open — dealt with the unfortunately named Mike Myers, who was striving to find meaning and importance in his role as a participant in various familiar horror scenarios (Cause I ain’t going to say ‘trope.’)

Segment Two-o (and elsewhere) — Rad Chad’s Horror Emporium — introduces us to “Rad” Chad (Jeremy King), who we later learn very may well be an unknown offspring of Joe Bob (at least that’s what he hopes) or just a really obsessed fan (what JBB thinks). Chad runs a video store, deals with a jilted obsessed customer who wears a taco shirt, and decides to bring in a new employee who damn well better not open the FORBIDDEN DOOR.

Segment Three-o — One Time in the Woods — has a bunch of campers (guess where?) who encounter both a slasher and a slime-glopola were-creature vulnerable to silver that enabled JBB to perform a somewhat-archaic advertising jingle for Nashville’s venerable Goo Goo Cluster, available at, where else(?) Cracker Barrel and online.

Segment Four-o — M.I.S.T., E.R. — A guy takes down a werewolf-run fight club for his wife’s Satanic ritual. JBB was pretty lukewarm on this one and the next segment.

Segment Five-o — Girls’ Night Out of Body — The prior-mentioned “post-modern feminist revenge slasher body horror” segment of Scare Care that involved shoplifting, a heavy breather, skull-head transformations and a slumber party that featured no garbonzas, thus betraying its 1980s slasher roots. JBB also was pretty lukewarm this part and had the additional complication of finding out that Darcy and the diabolical, devious and demented Austin Jennings had conspired to alter the show agenda and SWITCH the second feature on him…

Segment Six-o — The Night He Came Back Again! Part IV: The Final Kill — If there’s one thing we all know about serial-killer slashers, they’re like Wile E. Coyote cause they always are taking a licking and keep on ticking for movie after movie after movie… box office without end. Amen. But what happens when the victims get together and decide to end it, once and for all, but then the final girl thinks that the killer is hot? This segment answers this question.

Segment Seven-o — So Much to Do — A woman gets possessed by a zombified dude and fights for her body, but indignity follows indignity AND her favorite show gets spoiled.

Segment Eight-o — Horror Hypothesis — All of the “Rad” Chad segments come to their bloody conclusion as he gets warped into a parallel universe to do battle with the Devil’s Lake Impaler hisownself (AEW wrassler Dustin Rhodes), meet Joe Bob, who uses his electronic repair skills that he gained from hot-wiring the 1973 Olds Toronado at various Texas drive-ins when it quit on him to save the day, albeit briefly. Let’s also give a special Mutant hat-tip to Mr. Richard Whittaker, who made sure that the proprietor of this site didn’t get damaged, BTW. One question though — can the Last Drive-In be the source of a new feud now? I mean, Dustin did bodily harm to JBB in the flick and Joe Bob is tight with Le Champion, Chris Jericho…

Overall, you knew all the filmmakers of Scare Package loved what they were doing and the Drive-In Spirit shone through (and not just because they gave Joe Bob the chance to be a hero). By the time you read this, it should be able to stream, and check it out if you’d haven’t yet.

And speaking of flipping the script, the previously mentioned flick that Joe Bob thought he was going to review “the greatest horror film to ever come out of Estonia” (I was thinking this flick November), but nooooooooooo … instead Darcy and Austin unleashed upon our unsuspecting virgin eyes for Joe Bob Red Carpet Night — Hogzilla!

On the shelf for 13 years, it did indeed get nasty as Joe Bob, playing the mourning dad Andy, and a cast of unknowns stumbled through the wild Florida underbrush near Palm Beach “about 18 minutes from Mar-a-Lago.”

The flick had two prologues, Hog-o-Vision, Yuki and John Brennan wildly chanting “Hogzilla! Hogzilla! Hogzilla!” in maniacal fashion. It had Joe Bob suggesting a drinking game that any fat jokes, scenes involving eating, food references and obesity result in a shot of Wild Turkey or the equivalent.

It had Brad, the TV anchor, with a magic cell phone. (Take special note of his special freak out right before his demise). It had Mike the Marine with a possibly misspelled shirt. It had Fat Frank doing a Taxi Driver imitation and snorting. It had a hurricane in which everyone didn’t get wet and “some of the worst kills in horror history,” according to JBB. It had an actress with a mad-on for Andy, who kept blaming him for every dang thing, including causing the hurricane that knocked down the medium-sized stick that trapped their SUV so they couldn’t drive away.

But the reason to watch was Joe Bob, playing the grizzled hero with a staff adorned with a tusk stained with his kid’s blood, a lunatic to the screeching TV crew/campers but who, again, showed up to try to save the day, may or may not have been a ghost who was vulnerable to bullets or a dimensional traveler. Bottom line, he probably hadn’t been that embarrassed watching himself since that delivery driver gave him the VHS of “Dead in Concert.”

What will forever be known as the night of Hogzilla served to be “a major act of betrayal” on the part of Darcy, who found the footage and arranged with director Diane Jacques to get the flick, and Austin (again!) who edited the sucker.

Yet it all came together to serve a purpose. If in your wanderings in the woods you come across a sinister wild hog akin to the one that made Joe Bob’s character into a shell of his formerly drunken fatherly self, remember VOMIT-7-DAYS so you can report the big pig to the USDA.

Here are those totals from Darcy, on a groundbreaking episode where a Joe Bob show featured a movie starring Joe Bob that Joe Bob hadn’t seen. Hey, it’s a dirty job, but someone’s gotta do it.

See you next week for the season finale!