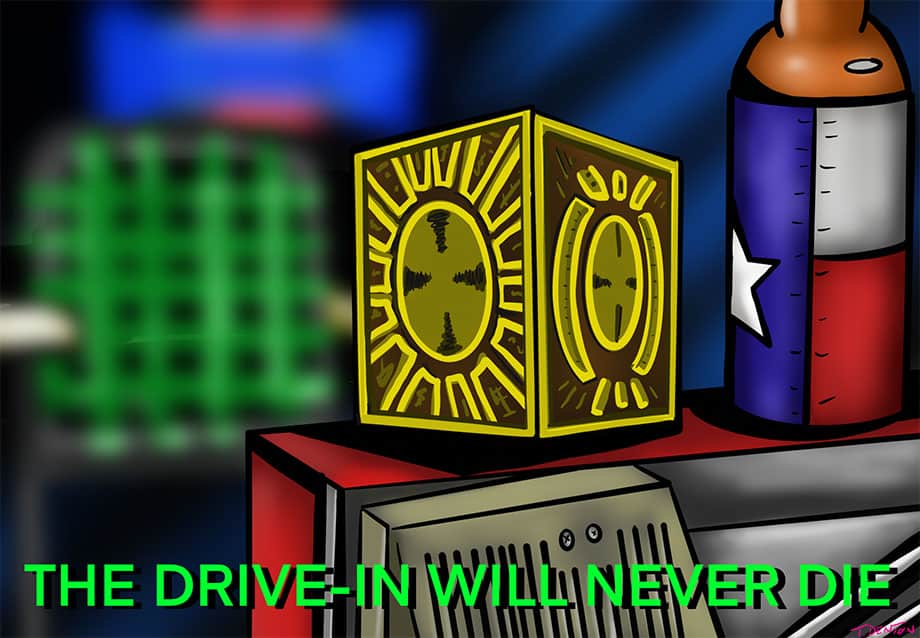 The last double-feature of Season Two-o of The Last Drive-In started out with another trip into Clive Barker's vision of Hell with those Cenobites (pinheaded and otherwise) tormenting some more folks in Hellbound: Hellraiser II.

Ah, the suffering. The sweet suffering

Friday night was time for the return of the devil-sex, mush-head, goo-eyed Cenobite people trying to crowbar themselves into the life of innocent little Kirsty. That’s right, Hellbound: Hellraiser II. Following in the fine sequel tradition of The Godfather, Hellbound does not disappoint but I’m also partial to sequels with flashbacks to the original/prior film: Silent Night Deadly Night 2, Halloween 2 and every Rocky sequel ever made. Horror may be the one place where you can never get too much of a good thing.

Just after Joe Bob opened the gateway to Hell and turned Darcy into sexy Pinhead, we got the Drive-In Totals, as only Hellbound can deliver…

Hellraiser’s fetish theme was the perfect tie-in to Joe Bob’s monologue on the horror fan’s love of physical media versus the Cloud, with so many of us preferring the BluRay, DVD – hell even the VHS tape if only for sentimental reasons – over our digital libraries on the Cloud. My introduction to Italian horror came complements of Anchor Bay’s early-aughts VHS releases, with my Saturday morning meccas to the local Media Play to snatch up all the Argento, Fulci and Cozzi I could handle (with a little Jess Franco thrown in for good measure) being the highlight of my week. I don’t have a player anymore – my dual VHS/DVD unit finally gave out a coupla years ago – but I will NEVER get rid of those VHS tapes. They made me the horror woman I am today.

And there’s no better argument for how much physical media means than Joe Bob himself. Seeing Legend of Boggy Creek, Daughters of Darkness and (gasp!) Sleepaway Camp and all that Felissa Rose deliciousness. Seeing Joe Bob’s shows disappear – from The Last Drive-In to MonsterVision, all the way back to his days on The Movie Channel – is a baked-in downside to his very unique format: original content paired with movies whose licensing rights shift like the sands of the Sahara and are increasingly subject to cultural censorship by middle managers and creative directors in gray cardigans who nod off every night to sugar-plum algorithms and data-driven decisions that dance in their heads. So much for crusading. All I know is this: If we lose Joe Bob’s history of the Demoni sequels, it’ll be enough to make a monster-kid cry.

Speaking of tears, Jesus, Matthew, Mark, Luke AND John all surely wept at Friday night’s feature and reunion of Ashley Laurence and Doug Bradley. Ashley charmed the pants off of everybody, made a love match with Ernie, and looked for all the world in her Drive-In segments with Doug Bradley like his biggest fan. Seeing the obvious chemistry between the two actors and their respect for what Clive Barker created made for a magical night that just happened to feature a fantastic horror film.

One of horror’s finest Final Girls and most imaginative psychological monsters joined Joe Bob for a tremendous discussion of whether Barker’s Hell is a religious one or more akin to what Milton writes in Paradise Lost, which Bradley himself quoted on the show: “The mind is its own place, and in itself can make a heaven of hell, a hell of heaven.” That notion ties together the agony of the patients in Channard’s hospital and Channard’s own desire to see and to know, with Pinhead being an ambassador of what people want to explore.

Dr. Channard’s rage comparatively transforms Pinhead and Crew from monsters into ambassadors of moderation. They possess a kind of detachment, can manage what they’ve become (unlike Frank and Channard), and end up representing a kind of Middle Way, if Hell were to have one. They’ll still rip your skin off, but given the choice between Channard and Kirsty, destroying the good doctor is what helps restore balance in this S&M world.

Kenneth Cranham portrays Channard beautifully, offering a counter-gravitas to Pinhead before surpassing him in terror. The early scenes in the psychiatric hospital should give each of us pause, that the mental health traumas humans are suffering on this planet are just as much a living Hell as any Cenobite’s depths. And the gore. It’s nearly unsurpassed in horror for its extremity yet ability to maintain a kind of realism within the supernatural world of the story.

There’s one thing I gotta say about the Box. Is it just me or is it ridiculously easy to activate? You basically push a button and it does all the work. Yes, you supply a touch here, a turn there. But it’s basically designed to keep fitting together as it transforms. Maybe the puzzle aspect is being able to activate it in the first place and that only one who is motivated – by depravity or purity – can do that.

One pastime that can and should be gloriously free of any Lament Configuration? The Last Drive-In, where Joe Bob and Darcy show up and consistently do things the drive-in way. When we focus on the movies and the commitment they have to taking care of horror family – one that has literally grown up around Joe Bob for more than 30 years – and that Darcy nurtures like the best Horror Mom you could ever have, it just doesn’t get any better. Hard to believe the season’s already over and we miss you guys already.

Next Up: Hell Comes to Frogtown and Mr. Nagy was there to see it all…