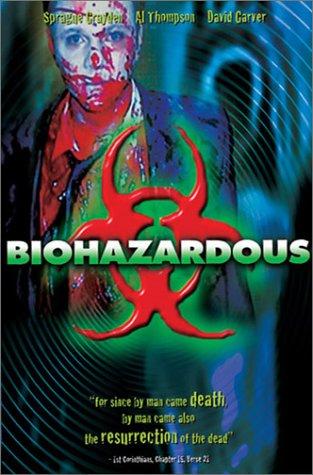 In this review originally syndicated on May 15, 2002, Joe Bob takes a look at the explosion of zombie flicks in the years since Night of the Living Dead and a New Jersey-based flick called "Biohazardous."

Editor’s Note: This edition of Joe Bob Goes to the Drive-In was originally syndicated by United Press International on May 15, 2002. Some stuff has changed since then.

Do you know how many zombie movies there were between the years 1930 and 1967? Approximately ten.

Do you know how many there have been since then? Approximately one thousand.

What is it with the zombies? In 1967, when George Romero made Night of the Living Dead, zombies were still sufficiently rare for him to be able to invent a few ground-breaking character traits: the herky-jerky walk, the undead stare, the bullet-to- the-brain effect. By 1982, the year of Sam Raimi’s Evil Dead, zombies were still uncommon enough that Raimi could add his own innovation — the first zombies that could only be killed by total dismemberment.

But after that zombies started popping up on video faster than bodies at a Georgia crematorium. Maybe it was the growth and popularity of Fangoria, the magazine that teaches everyone how to do special-effects gore makeup. Maybe it was Marilyn Manson. (Or Gwar.) Maybe it was the fact that a lot of teenagers in the eighties thought their parents were zombies. Even Wes Craven got into the zombie business, making The Serpent and the Rainbow, the most intellectual of all zombie flicks.

Whatever the reason, 20 years after Evil Dead we’ve got zombies swarming through the B-movie world like mutilated collectible action figures. Sometimes zombies turn up in films that aren’t even about zombies. I think it’s safe to say that zombies have become part of the fabric of American life, like telemarketers. Every nasty convenience store clerk, idiot boss or hateful girlfriend is just a zombie waiting to happen.

Take Biohazardous, which is a pretty much by-the-numbers micro-budget effort by Michael J. Hein, the leading filmmaker in Hillsdale, New Jersey.

There’s a top secret genetic-engineering plant on the edge of town using reanimated dead people to create unkillable soldiers for the U.S. military. (Yes, we’ve had that one before.) Dope-smoking, beer-guzzling teenagers are raising hell on the factory grounds. (Been there, done that.) A local priest is hiring thugs to penetrate the facility on behalf of anti-military protesters. (A little bit of a twist.) And doofus cops are doing a little trigger-happy investigation of their own. (There’s no such thing as a smart cop in a zombie movie.)

Bring them all together on one fateful night at Gentech, a company founded by a Nazi in the thirties but then seized by the Allies during World War II, and you have a pretty conventional excuse for slathering blood on several dozen extras and telling them to moan, stare and walk funny while chomping on supporting actors and getting mown down by various types of semi-automatic weaponry.

Sprague Grayden plays the Final Girl who gets sucked into the zombie nightmare by her immature boyfriend and his slacker buddies, with Katheryn Winnick as her airhead-blonde sidekick and Gary Ray as her chainsaw-wielding father, who works as a Gentech security guard. It’s all an excuse for massive quantities of grue, doled out mostly in the form of gooey exposed-limb-eating. Call it Zombie Lite, New Jersey-style.

And those Drive-In Totals are:

Drive-In Academy Award nominations for Gary Ray, as the lecturing daddy who moonlights as a zombie-research security guard; Sprague Grayden, the rebellious daughter who says they have to party at the zombie facility because “Nothing ever happens around here!”; Will Dunham, as the creepola Catholic priest out to get those “Rapers of the body, mind and soul!”; Michelle Santopietro as the hysterical research assistant; Tomas A. Cahill as the evil manipulative zombie-maker Mr. Stine; and Michael J. Hein, the writer/director, for doing things the drive-in way.

Biohazardous is available for rent or purchase on Amazon Prime as well as on DVD.