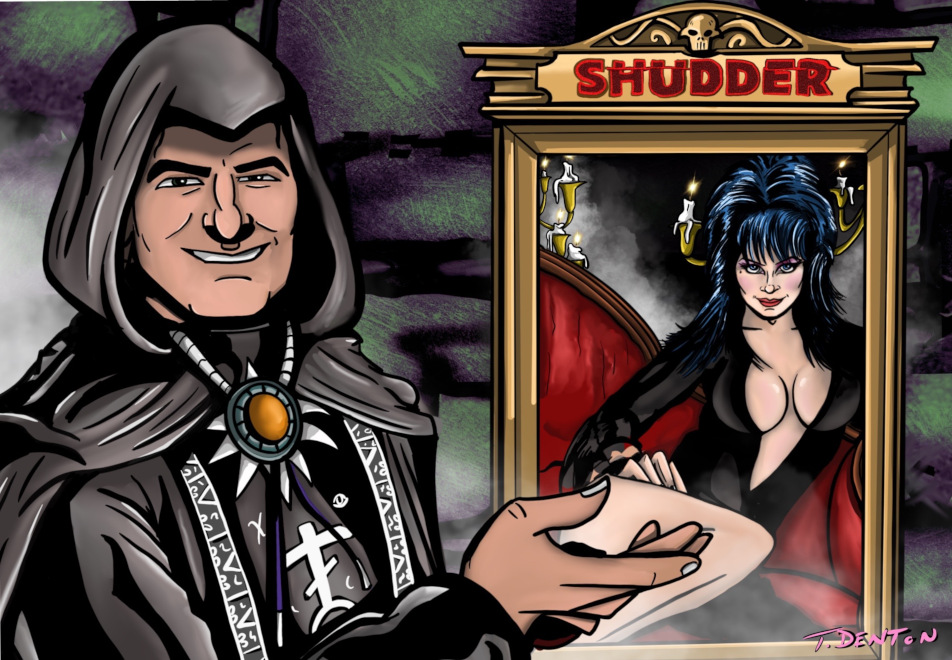 About three decades back, the big criticism about the Super Bowl was that what was supposed to be the crowning, ultimate, must-see event of the football season ended up having no suspense and being a less-than-satisfying experience.

The game ended up being a blowout, the halftime show didn’t wow folks for the most part and so people looked forward to the commercials.

Well, JB and the crew of the Last Drive-In brought in two guests of major repute to finally get a Halloween special that did the holiday — let’s face it, it’s really the horror community’s Super Bowl — some justice.

After we Mutants learned in passing from Darcy that “Mexican Halloween” is a kinky sex act and seeing the great lengths the crew went to for a comprehensive festive setup around the trailer, Cassandra Peterson, the woman who gave Elvira, the Mistress of the Dark, life for more than 40 years, showed up and regaled us with a ton of tales about her career amid the first feature, Elvira’s Haunted Hills.

She started out at a go-go dancer during her school breaks and even got to the point where she commissioned others.

Her life actually got quieter when she started getting famous as Elvira.

It took two hours of make-up prep every time Cassandra donned the costume.

She does not recommend self-financing a passion product, even though the flick ended up turning out great (box-office performance notwithstanding).

And here are the totals from Haunted Hills, a witty Hammer-Corman-Marx Brothers pastiche that Fabio could have been in, but he was busy doing other stuff:

And while what was covered in the interview was just the tip of the Elvira iceberg, you owe it to yourself to check her biography out if you want to know more.

We also would be remiss in not compiling in sharing the helpful Halloween trick tips that Joe Bob had:

Feature two-o, which got an identical three stars as the first flick, is a Darcy favorite on the screen and at the concession stand — Popcorn. After a lively debate with Joe Bob about USING THE READING LIGHT on planes and an exploration of the annual obscenity unleashed by companies called candy corn, guest  Jill Schoelen, she of The Stepfather and Curse II: The Bite, paid a visit.

And here are the totals for Popcorn, the finest horror film shot in Jamaica that happens in a movie theater, Demoni-style:

The trouble of the production was well-documented, as Schoelen shared, and the flick seemed almost as convoluted (at least in my opinion) as Spookies and Demon Wind, possibly as a result.

And while he still hasn’t figured out how he wants to pronounce Samhain (going the Donald Pleasence route for the most part), Joe Bob donned a druidic cloak and offered the following tips for the more earthy celebrants of the holiday:

And that’s it for the hangout!