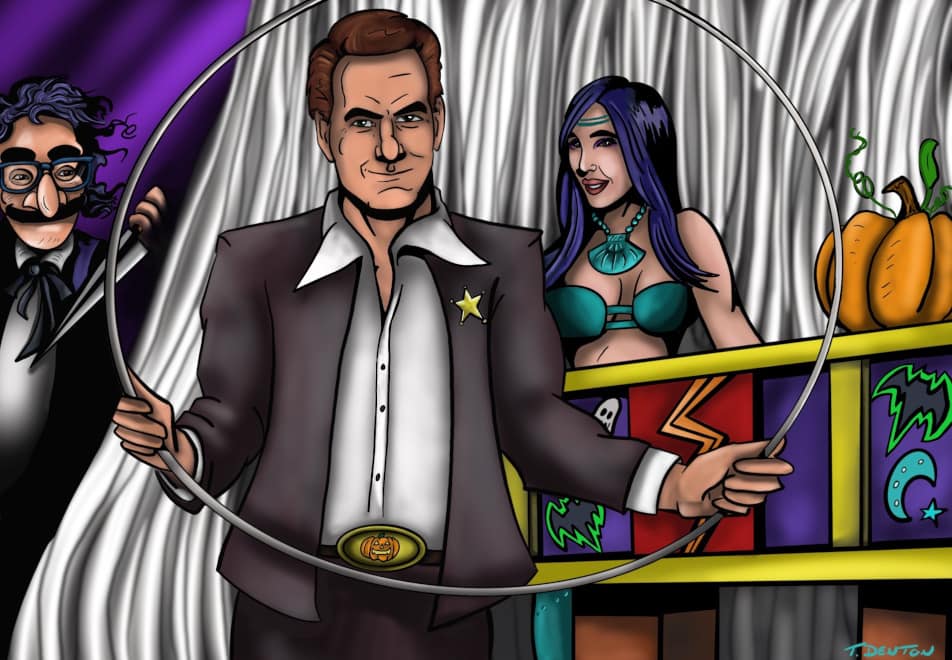 A pun for the ages, two modern horror heavyweights with their hands on Halloween and a bunch of creatively carved pumpkins. The Hoedown defied expectations and rang in the Druidic New Year as only The Last Drive-In can.

Once all the tweets have been deleted, the posts rendered into their component pixels, the servers silenced and the cloud broken up into so much silicon detritus, there will be one takeaway that, centuries from now, indelibly will be etched on the massive screen of the one true Drive-In That Will Never Die regarding the Halloween Hoedown special of 2021.

Not everyone appreciates a majestic pun.

Judging by some of the reactions to the flicks chosen BY THE SPECIAL GUESTS, a lot of folks were just so hacked off that showing a four-star flick and a three-and-a-half star flick featuring Jamie Lee Curtis, the star of the original Halloween and three (going on four) sequels (Resurrection doesn’t count) for a special holiday show just wasn’t GOOD ENOUGH.

We at the Last Call Blog freely admit that Angel and Terror Train, the flicks chosen for the event, were not conventional selections by any stretch. (If you wanted Michael Myers and convention, you shoulda been here in 2019 for the Hootenanny.)

We also defer to the simple math presented in the Drive-in Totals that there were more garbonzas to be seen than pumpkins in these flicks, even though the set designers, Joe Bob, Darcy and the guests made darn sure that you knew that this was a Halloween event.

They made Jason Blum, one of the most-powerful horror producers in Hollywood these days, wear a sombrero and a mustache.

As God intended, pumpkins were attacked with knives. There were like 21 carved pumpkins on set.

Joe Bob carved one that looked like James Buchanan.

Joe Bob carved one that looked like Franklin Pierce.

Job Bob was going to do another one that looked like Millard Fillmore.

Joe Bob was going to do another one that looked like Emmanuel Macron, the president of France.

But the knives had to be put away after first feature guest David Gordon Green, writer/director of the 2018 Halloween and Halloween Kills, carved one that the Shudder High Sheriffs had us BLUR OUT and was likely the subject of a meeting Monday morning at the Blumhouse Productions offices if the conversation overheard just beyond the trailer after the cameras stopped rolling was any indication.

So, really, if the calculators of the Official Halloween Content Quotient Review Board did an honest audit, they’d find that by doing a comparative evaluation of Halloween-related content, that the Hoedown had, minute-by-minute, MORE Halloween stuff in it than Halloween III and Darcy’s special lunchbox to boot.

And if you disagree with that, well, Angel had a creepy psycho who did calisthenics and couldn’t afford a set of Joe Weider weight plates so he had to use concrete blocks and killed more people than Michael Myers did in the 1978 Halloween.

And it had (thanks, Shudder!):

And Terror Train, with Jamie Lee, David Copperfield and (for the first part) a killer in a Gene Shalit mask that was much more disturbing than a painted-over William Shatner mask.

So with two movies with killers, some real red meat about the film business from two filmmakers who are where some independent filmmakers wish they could one day be and enough pumpkin-based content to bridge the weeks between its first showing and the official Halloween holiday, the Hoedown had something for everyone.

But now the big thing on the mind of the Mutant Family is this:

We’ve had a Hootenanny.

We’ve had a Hideaway.

And now we’ve had a Hoedown.

If this trend continues, what alliterative event are we going to be treated to next October?

See you in 2022 for the Halloween High Tea featuring two flicks with Christopher Lee?