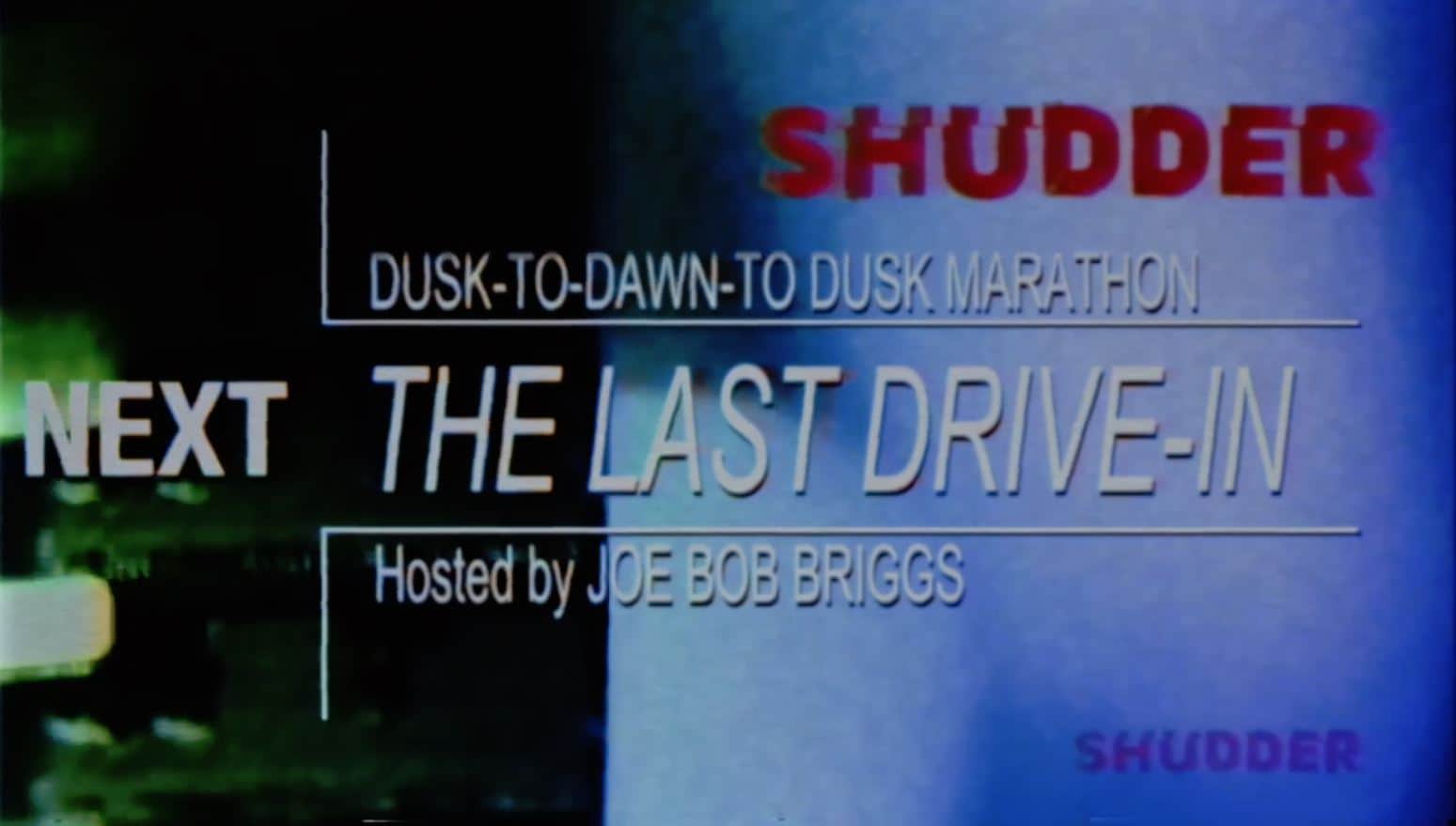 Ohhh, little girl. Drive-In Flick Numero Uno, if you got to see it, featured Chuck Connors as you’ve never seen him before – an overall-wearin, rifle-totin, telekinetic lovesick hillbilly pervert who has trouble with three things: his wife’s death, his murderous “brother” and how to not want to turn nubile young Tanya Robertses into his own personal life-size Barbie doll collection. Along the way, we get a Slauson’s Lost Oasis Western Museum, a booty-shorts bonanza, one of the creepiest getaways on film, and a roomful of hyperventilating mannequins who are either allergic to ragweed and forgot their epi-pens or are now in a state of perpetual sexual frustration. Bein Drive-In people, we’re voting the latter.

Tear in Your Beer Moment: Technical difficulties; the triumphant return of our favorite mutant katydid, Joe Bob Freakin Briggs, after his 17-year absence from our screens but not our hearts.

Had Joe Bob’s comeback been but a single film, we’d have died happy Mutants. Sleepaway Camp is the 80s slash-ic with no breasts, a non-stop stream of boys in booty shorts and one very special piece of genitalia if you know what we mean and we think you do. This one has literally has it all: lecherous men in pastel leisure suits, off-label curling-iron use, one kooky aunt, multiple homoerotic themes, and a surprise ending that makes The Sixth Sense look like a well-worn episode of The Brady Bunch.

Episode Two featured the eternally delightful Felissa Rose and her sensitive portrayal of Angela, just the girl we’re looking for. She may be flat as a board and need a screw, but our custom order just came in from T-Shirts Plus and the rainbow letters on our budding teenage chests spell A-N-G-E-L-A. In addition to launching Felissa as The Last Drive-In’s Mangled Dick Expert, it launched introduced her to Darcy. #besties!

Tear in Your Beer Moment: Knowing Joe Bob, Darcy and Felissa would hit the Nasty Javelina out by the lake after we lay passed out in our Friday the 13th Footie Pajamas

Not-At-All-Official Last-Drive-In Anniversary Bracket Results: Upset in Round 3 to Re-Animator

Totally Tangential Phantasm Tie-In: You can always count on family…sort of

The Carpenter’s Dream theme continued with Rabid, one of the many horror-with-a-porn-connection flicks Joe Bob has gifted us with in the course of our long and seedy mutant careers. This one’s got the Trifecta: David Cronenberg, the fabulous Marilyn “Behind the Green Door” Chambers and one very hungry axilla. Cronenberg likes his horror like he likes his Ontario winters – long, bleak and god-less – and Rabid is no exception. Just don’t call it a zombie flick. One in a long line of imaginary Drive-In sub-genres like Venereal Horror, Rabid is perhaps the one and only example of Armpit Dentata.

Totally Tangential Phantasm Tie-In: Had we not had Marilyn Chambers, Lady in Lavender Kathy Lester would’ve made a helluva Rose

Wake up! Just in time for Hour Six and your second case of Lone Star came The Prowler, one of the few boring slasher films ever made and impossible to watch without outside stimulation if you know what we mean and we think you do. Yes the killer wore a creepy WWII gas mask. Yes his pitchfork skills were enviable. Yes there was an unexpected epistolary opening in which yet another homesick soldier got his heart done broke, inevitably leading to murder. And yes — the man, the legend Tom Savini did the absolutely phenomenal effects. Other than that, The Prowler likely marked the first low strains of desperate self-talk we would use to stay awake for the next 97 hours: “I can’t go to bed. It’s Joe Bob!”

Tear in Your Beer Moment: Knowin Joe Bob might cross you off the Good Mutants List if you compose long emails while fiddlin with your phone

First Marathon Mention of a Recurring Joe Bob Theme: Use of the word Eye-talian; the Big Man’s hatred of cat-and-mouse

Not-At-All-Official Last-Drive-In Anniversary Bracket Results: Lost in Round 1 to Rabid

Totally Tangential Phantasm Tie-In: A big white rambling house with a lot of dead people. That’s the best we can do on this one, folks.

We daresay it would take Society to top the head-scratchin, WTF’in kind of drive-in experience that was Sorority Babes in the Slimeball Bowl-O-Rama. And then we remember: It was just the 80s, the decade that gave us Porky’s. You can’t have a better guide to a movie that features a ball headed straight for the gutter and a jive-talking mutant demon who lives in a bowling trophy and likes to turn sorority girls into raving sex-maniac lasagna-faced zombies than Joe Bob. Or a better introduction to three of the Reagan era’s best scream queens: Brinke Stevens, Michelle Bauer and the one and only Linnea Quigley. Sure Babes came out in ’88, the cusp of Bush’s Thousand Points of Light era, but who’s counting?

Tear in Your Beer Moment: This moment officially hijacked by Joe Bob pervin at the thought of which scream queen is Hard, which one is Fast and which one is Dirty…

First Marathon Mention of a Recurring Joe Bob Theme: Plot getting in the way of story – or in this case, none at all

The golden age of lesbian vampire horror lasted from 1970 to 1975, and Daughters of Darkness was a surprising Joe Bob favorite. Dripping with art-house pretention, JBB mic-dropped this high-falutin Flanders flick on an unsuspecting Mutant public in the early morning hours of Saturday the 14th. Roll that summ’ry Joe Bob:

Daughter of Darkness is the old familiar story of a beautiful Hungarian countess and her lesbian assistant who arrive at a grand hotel in Ostend in the middle of the night and notice a newlywed couple that look like they could be ghoul meat. But since this is Europe, and since this is an art house film, it all gets worked out through witty conversation and rough sex—well, at least until people start DYING in incredibly grisly ways.

With a drop-dead-gorgeous international cast featuring Delphine Seyrig and its pill-popping misogynistic director Harry Kümel, Daughters of Darkness marked the beginning and the end of the Flanders horror renaissance. That’s too bad because some of us actually liked it.

Tear in Your Beer Moment: Staying awake after Sorority Babes in the Slimeball Bowl-O-Rama

Not-At-All-Official Last-Drive-In Anniversary Bracket Results: Lost in Round 1 to Sorority Babes in the Slimeball Bowl-O-Rama

Totally Tangential Phantasm Tie-In: Reggie would totally be tuning up his guitar for a chance at these vamps, if you know what we mean (and we think you do).

Next Up: Roll those recaps for flicks Numero Seven-o through Nine-o...