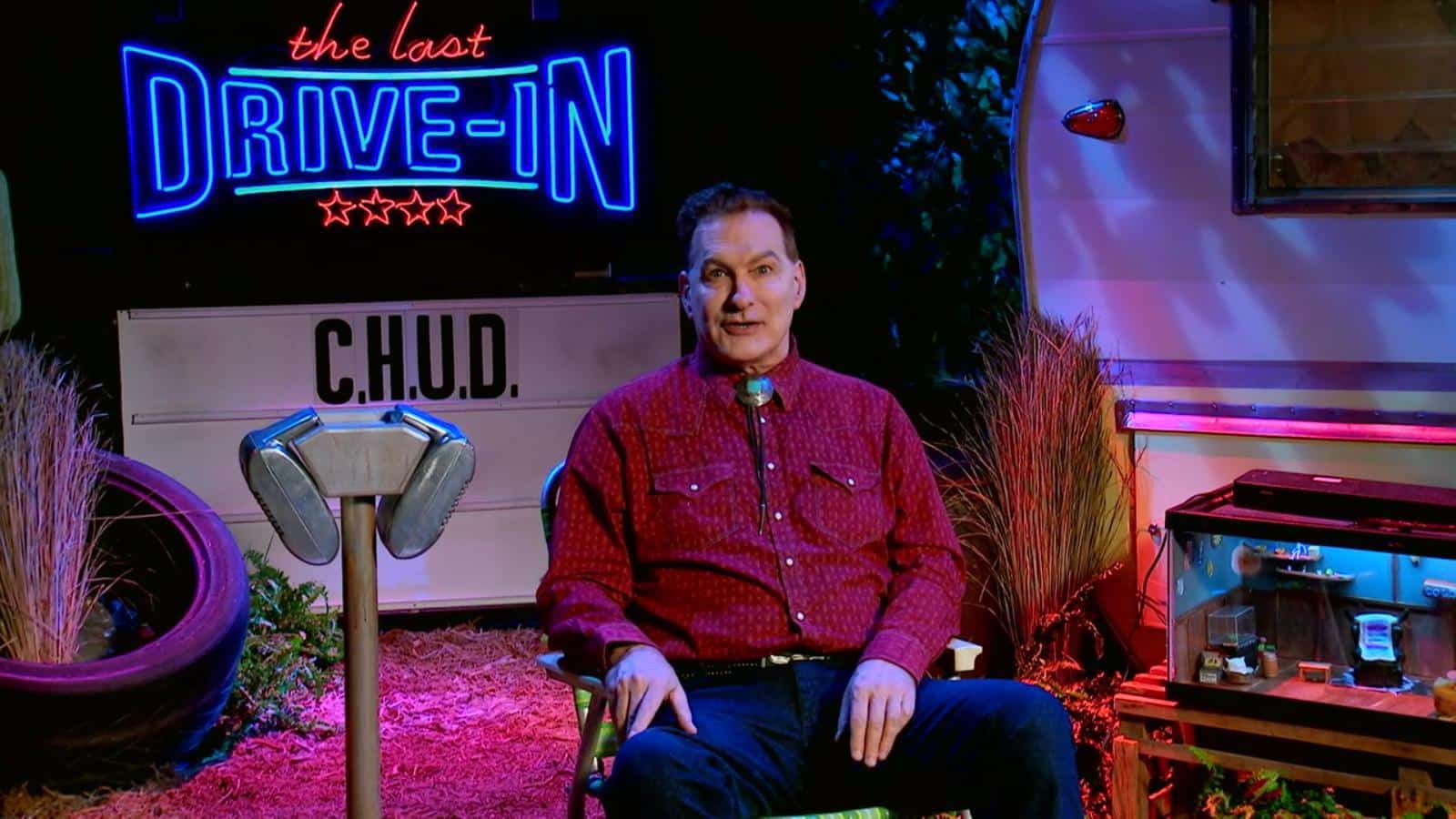 The Last Drive-In: The Series premieres, proving that a mutant horde bonded on a Friday night has the power to shut the sky.

Our long national nightmare is over

The drive-in reopens with a return to July 25, 1985, wherein Joe Bob administers The Drive-In Oath to the virgin faithful.

Flash forward, March 29, 2019. The Last Drive-In: The Series premieres, proving that a horde of mutants banded together on a Friday night has the power to shut the sky.

Thus opens Joe Bob’s take on C.H.U.D., the heart-wrenching tale of sewer-dwelling homeless people who get turned into mutants by toxic waste that’s been dumped underground by a corrupt government agency called the NRC. The only way to stop the threat and execute the cover-up is to pump gas into the sewer and smoke out the formerly human, now man-eating mutants that are dog-killin and diner-destroyin their way through the streets of lower Manhattan. It will take a soup kitchen manager, a model, and a former high-fashion photographer working with a lone hero cop to reveal the conspiracy and save the city. The NRC plot fails, the bad guy dies, the good guys win. The End. Along the way we discover that C.H.U.D. stands not for Cannibalistic Humanoid Underground Dweller but Contamination Hazard Urban Disposal. One of the many twists and turns on our way to nowhere.

It all adds up to 2 Stars (cross reference 2 unseen breasts). You want the rest, you gotta re-watch the show in which Joe Bob tells us why we should hate snooty New York actors and why a little John Goodman/Jay Thomas in an all-night diner that’s about to serve a different kind of hamburger meat goes a long way. Which brings us to a segment we like to call…

Numero uno: There’s no length a bunch of horror amateurs won’t go to to make a bad movie. Dead dogs. Cardboard box home invasion. Police detectives who are suspiciously nonchalant about their wives’ disappearances. Police detectives who describe their deceased wives with all the love and affection of a preacher-for-hire at a hastily arranged funeral (“She just went back to college…She used to stay up half the night, studying. Then she’d go out and…walk the dog.”). C.H.U.D. proves that theatre creds, pre-hipster SoHo shooting locations, and rampant nepotism do not a good movie make. Joe Bob rightly names at least 18 million examples of plot getting in the way of story, including two C.H.U.D. acronyms, two shady government agencies, and so much tell over show that “Somebody’s gonna have to stop it and it’s gonna have to be us!” All told, you’ve got the clear difference between Q the Winged Serpent and Let’s Give Horror the Ol’ College Try.

Numero two-o: There’s one length a bunch of horror amateurs will go to to make a bad movie. In the slightly revised words of Lincoln Osiris: Never go full retard, but always go full C.H.U.D. This flick doesn’t. We’re left for the most part with disembodied C.H.U.D.s whose tiny T-Rex arms are barely long enough to peek out of the sewer and make jazz hands. Ernie – without makeup – would have made a better C.H.U.D. It just reinforces what we’ve always known: Ass-less chaps? Good. Body-less C.H.U.D.s? Bad. Redemptive moment: C.H.U.D.s limbering up with sun salutations.

Numero three-o: Otherwise sexy and/or talented actors will not appear so in C.H.U.D. This film pulls off the impossible: making its talented attractive leads appear…un-aardvarkable. The normally handsome John Heard (George) ranks so high on the Pasty-Meter he must’ve eaten bad sushi between every take. Kim Greist (Lauren) is suspiciously un-smoldery as well given her smoky turns on Miami Vice and Manhunter just a year+ later. (Michael Mann > Douglas Cheek). Her mid-film, no-nudity, tile-and-grout commercial ranks as the least sexy shower scene of all time. Meanwhile, Daniel Stern (A.J.) looks creepier than the actual C.H.U.D.s (though how would we know?). He snarls. He looks like a rat trying to chew its way through a pile of jumper cables. And he’s so dang dirty! If you’re meeting with the police commissioner to help save the human race, may we humbly suggest washing your hands. It’s all enough to make us drink copious amounts of Lone Star. Of course, anything’s enough to make us drink copious amounts of Lone Star.

We’re not normally revisionist but what the hell. Lauren’s booty pimple is this film’s Chekhov’s gun and it’s about to go off. Unbeknownst to all, the bump is really a C.H.U.D. bite, causing her undeveloped fetus to mutate. Just when you think the C.H.U.D.s have been defeated, she and George give birth to the second coming. The End?

For you Arrow-lovin C.H.U.D. monkeys out there, this review’s been a rough one. But don’t despair. Put your hand on your heart and repeat after us:

Mama still loves us, even if no one else does.

We will single-handedly Kickstart C.H.U.D.: The Musical.

It’s enough to bring a tear to our eye, until…

Despite the film’s 98-minute run-time, the most dramatic moments come in the post-C.H.U.D. banter, in which Joe Bob challenges Darcy on the film’s merits:

A Stuart Gordon classic that shows more than enough monster, if you know what we mean and we think you do…