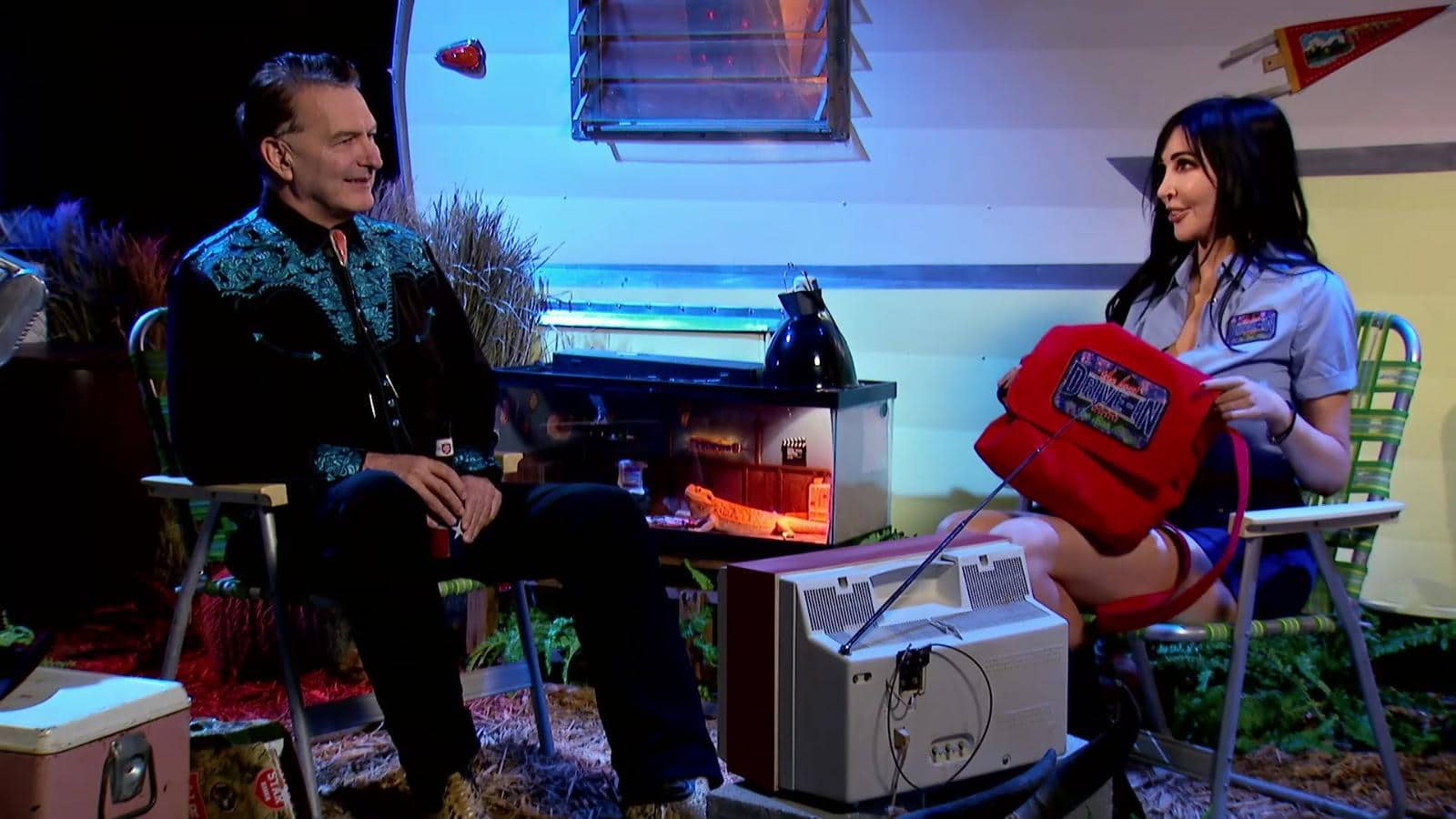 Tonight’s safe word is ballad. Madman features 'em, Joe Bob croons 'em, and we love 'em. In fact, we might be balladeers ourselves.

Madman: Don’t Take Words to Know – But It Helps

Sing it Joe Bob! Tonight’s safe word is ballad. Madman features ’em, Joe Bob croons ’em, and we love ’em. In fact, we might be balladeers ourselves.

“Do I Ask Too Many Questions?”
– Joe Bob Briggs

Yes, but we love it. And we love Madman, the tale of a murderous redneck summoned from retirement by teenage counselors at a gifted kids’ camp. Warned not to speak his name, they promptly speak his name. Richie disappears. Mass decapitations, a hanging, a cracked back, an axe to the chest, a shooting, and one fire-y death follow — causing premature break-ups for T.P. and Betsy, Dave and Stacy, Bill and Ellie.

And the burning question: If one character’s name must be yelled the entire film, should it really be “T.P.”?

Plus that infamous hot tub scene. It don’t take words to know, but it does take repeated 360-degree turns in a 110-degree hot tub for T.P. and Betsy to get their freak on.

To the Drive-In Totals, this Gratuitous Blogger adds: Multiple Homoerotic Long-Handle-Axe-Grippin Close-Ups and an honorary Hubbie for Alex Murphy, who strides through the woods with all the nuance of an actor looking for his mark. Somehow it comes together. Anchored in legend, Madman and The Last-Drive In prove you’re never too old for a campfire ballad – especially when it’s told in a Staten Island accent.

The Redneck Connection
It wouldn’t be a drive-in blog without a little hist’ry. In fact, you can draw a direct line between the ballad, Madman, and Joe Bob’s chosen people: the rednecks. Consider the following:

In case you want to sing along with Joe Bob and John (you’ve gotta see it to believe it), or harbor the deep desire to start your own legendary acoustic cover band that performs only at secluded camps for gifted kids, here are the official lyrics to the “Madman” theme song:

From Aristotle’s Poetics to words and music by Gary Sales – long live Joe Bob and long live Madman. The Drive-In Will Never Die.

Kumbaya
If that didn’t bring a tear to your eye, feature this …

Last July, we broke the Internet because we missed Joe Bob’s ballads. Friday night became a place — and still is — where we gather around our digital campfires to hear him tell us stories.

Whether you’re a Staten Island Redneck, a Holst-loving B-movie director, a horror fan, a ho-rror nerd Mail Girl, or a horror host, we all have one thing in common: We’re in it for the love.

Joe Bob: You go to Europe all the time right?
Darcy: Not all the time … (gratuitous eye roll)
Joe Bob: But you work over there. Get one of your friends over there to fix this situation.
Darcy: I’ll get right on that for ya.