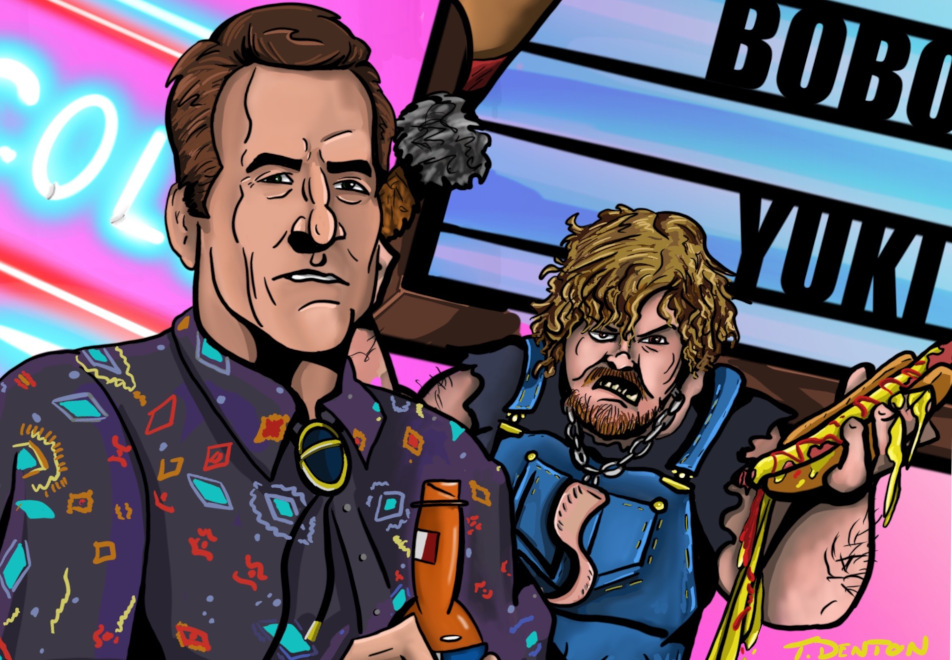 We officially hit the halfway point in the fourth season of The Last Drive-In with “Junk Food Night,” a double-feature celebration of animal processing, hot dogs (neither of which are Darcy’s favorite topic by any stretch) and giallo-colored mustard.

The first flick was Slaughterhouse, a throwback late-stage slasher that married Texas Chainsaw Massacre elements in with an examination of the plight of the small businessperson who just wants to kill things and then make jerky out of them. Unfortunately, the Bacon family’s plight came about seven years too late for any hopes of a crossover with Motel Hell to get going and also a touch too late for writer/director Rick Roessler’s imposing (at least he was shot that way) Buddy Bacon (Joe B. Barton) character to become the next Jason or Freddy Krueger.

Still, the two-and-a-half-star flick provided a vehicle for Joe Bob to learn us on everything about the gristle, slime and slurry-based hot dog that you might have been afraid to ask, including its Germanic origins (we’ve been hanging around there A LOT lately what with Nosferatu and Walpurgisnacht, haven’t we?) as a frankfurter.

Then, when that meat-cylinder-in-a-juicy-casing reached the shores of the U.S. with the first hot dog stand starting business in 1871, the strange food that looked like a Dachshund became the venerable hot dog. It took the absolutely pitiful St. Louis Browns, a team that won just one pennant in their 51 years of existence, to make it a ballpark staple that spread to other baseball cities, and for the record, Joe Bob hisownself for a time actually hocked hot dogs at Veterans Stadium, but he’s from the Dirty Harry school, so woe to anybody who puts ketchup on it.

And woe to anybody who tried to mess with the Bacons’ attempts to provide and bring home their own bacon, as evidenced by the Drive-In Totals:

After all the opportunities for John Brennan to chant “Hogzilla” provided by the first flick, a special delivery courtesy of Roessler that included a letter from Buddy AND a dive into the dubious composition of both Spam and the Pennsylvania regional meat mixture known as scrapple, the follow-up feature took us back to our Italian pal Dario Argento, who went into full auteur mode with his end-all giallo Tenebrae (or Tenebre or Unsane if you watched the nigh-incomprehensible American cut back in the day as JBB did).

Joe Bob’s Latin knowledge came in handy when trying to decipher the hidden meaning behind the title, but not so much when trying to figure out Dario’s gratuitous crane shot that back then took three days and now could be done in a couple hours by a decent drone pilot.

Times change, but the quality of the four-star flick didn’t — Joe Bob called Tenebrae “the best horror film of 1987” (of course this was before Jaws: The Revenge, The Hidden, Prince of Darkness and a little thing called, oh, Hellraiser came out) and who could argue?

As JBB said, there’s kinky, there’s Argento kinky, and for those who haven’t experienced what arguably could be the best giallo ever, there’s Tenebrae and one of the most surprising and bonkers endings EVER.

Have fun watching this week’s episode where we’ve been promised monsters and more monsters as we start the final half of the season!