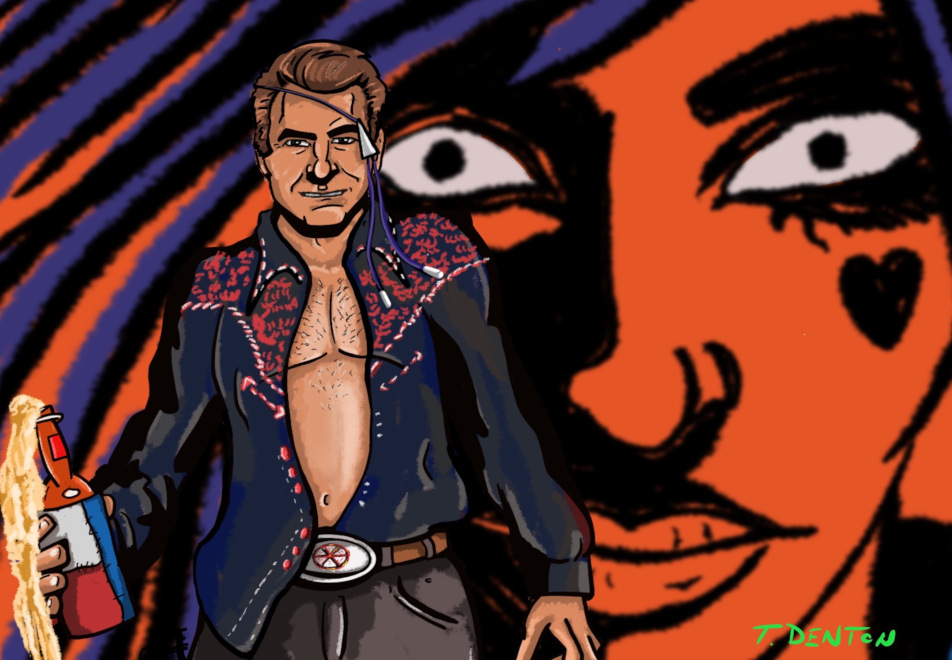 With the help of copious visual aids, two great flicks and earthy Eastern European alcoholic beverages (not necessarily in that order), a movement was born outside the trailer on the second week of The Lost Drive-In as Joe Bob and Darcy initiated a movement.

And what a movement it is. I think we all can get behind a spring version of Halloween. Let’s face it, any excuse to party like jungle (or in this case woodland) animals, stay up all night and ward off evil when the barriers between the worlds of the living and the dead are at their most gossamer, is a good one.

But the biggest barricade for the movement here in the United State, obviously, is the name. Walpurgisnacht? Way, way, way too long and too Germanic. Rammstein fans would dig it, but not catchy enough..

Beltane, not as bad, but sort of sounds like a boutique maker of hotel towels and just a touch too elegant.

Branding challenges aside, it’ll take a big push to undo what a couple thousand years of Catholic suppression have done to get this going. But once the maibock, mead and waldmeister maiwein companies and the oatmeal cake companies and the costume manufacturers latch onto it and see the dollar signs, we’ll know we’ve arrived, whichever name the Mutant Family (or the market) settles upon.

Several research trips to Lund, Sweden, Mount Bracken and heck, even Colorado, will be necessary if Ye Olde Witch Fighting Map is anything to go by.

One thing we will have to anticipate — fairy fighting contests, cosplay, fire and rolling around in the grass as the morning dew condenses. There will be a need to train the uninitiated celebrants to not roll around in poison ivy and to handle burning torches responsibly, even when inebriated, something Joe Bob and others’ experiences as card-carrying Order of the Arrow members are well-qualified to do.

And speaking of spires of flaming brilliance, the late trailblazing Italian maestro Mario Bava had his debut flick shown as the first feature. As mentioned in Joe Bob’s opening introduction, Black Sunday is a big bridge between the Universal-style horror that dominated talking pictures and the colorized gothic AIP/Hammer style when there was a bit more red on the screen.

The four-star Black Sunday is not my favorite Bava flick — that honor goes to Danger: Diabolik and then Rabid Dogs — but its importance in that transitory decade where the gothic spirit of Vincent Price stomping around castle for Roger Corman morphed into gore with Romero’s Night of the Living Dead, shouldn’t be diminished. It’s not every day you get to see a suspected vampires/witchy/succubus get her face impaled by a mask full of spikes thanks to an oily hooded guy who swings a big ol wooden long-handled Thor mallet.

Long story short, Babs Steel sucks blood, gets minions to do her bidding and gets real close to resurrecting herself thanks to some awkward academics who don’t know how to handle sharp objects — everyone now recognize the homage Lamberto Bava did toward his dad not once, but TWICE with all that mask stuff in Demoni now?

So there’s some devil stuff, some incest, doppelgängers and a bunch of fire. All the ingredients needed to start the Italian horror movement smoldering before the gialli took over.

Here are the totals:

Second feature was Def By Temptation — another descent into witch-type activities. Well-crafted by James Bond III in his (to-date) only directorial effort, he also starred in it. Distributed by Troma, Bond’s flick has Samuel L. Jackson in it for a minute and a half before he gets offed and focuses on a sultry succubus chewing on dangling participles of guys she meets in NYC bars and clawing the backs of philanderers.

Here are the totals:

The 3.5-star flick remains underrated and underwatched and, well, Joe Bob didn’t quite make it through hisownself. Kind of overdoing the Beltane spirit after partaking in copious amounts of brew, he did get back to the trailer after losing a couple fights to some woodland fairies and rolling around in the woods long enough to deliver a final joke. But while it looked dicey, he also recovered in time to do his North Carolina gig the next day.