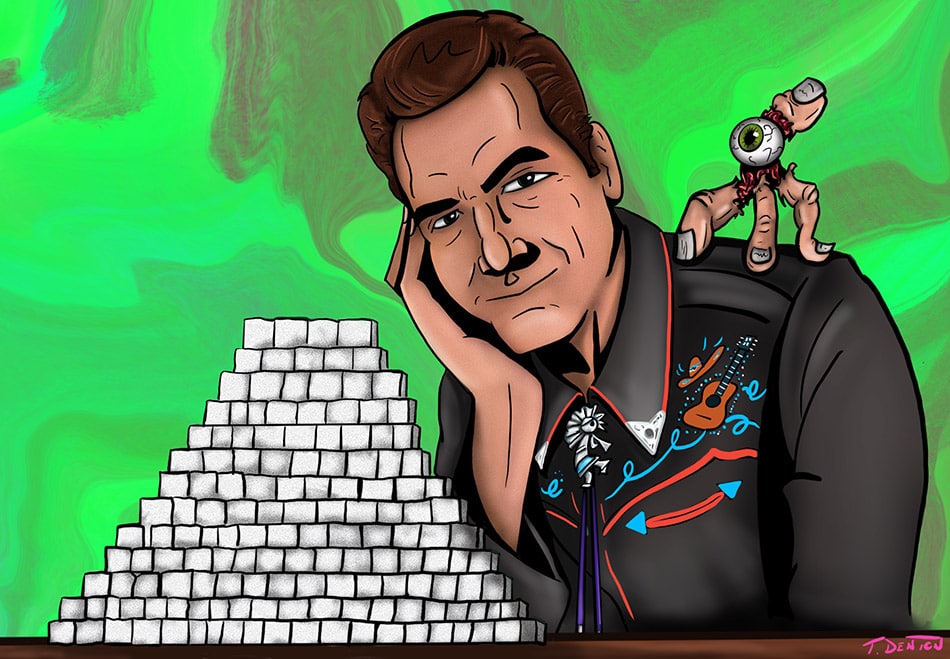 The Last Drive-In | Season Three-o, Week Three-o: Bride of Re-Animator and Next of Kin

It was a pretty sweet trick stacking sugar cubes in “Next of Kin,” but a pity what happened to the severed-finger-eyeball-spider critter, though. (Art by T.J. Denton @TDenton_1138 on Twitter)

The doctor was in … a cowboy hat?

The most honorable Jeffrey Combs, who brought Herbert West to life in the 1985 Stuart Gordon classic Re-Animator and basically ruined the hopes of any actor who wanted to play the character for the next four decades, was the honorable guest to the Last Drive-In cabin in the woods (via satellite, of course) during our opening salvo of guts ‘n’ grue in Week 3, the sequel Bride of Re-Animator.

Boy, howdy, did we have a little bit of a surprise when the classically trained Combs, the guy known for playing the most clinical of mad scientists, busted out with the little-known fact that he has some Ozark blood in him. Then, he unleashed a long-concealed Southern accent and the ten-gallon hat (that’s 37,854.1 CCs of reagent in case you’re wondering) to show to Joe Bob that yes, they have more in common than just an admiration for the ability of David Gale to achieve the legendary feat by getting through not one, but TWO Re-Animator flicks as Dr. Carl Hill’s severed head.

But Mr. Combs is about more than bloody lab coats and injecting glowing green fluorescent glopola into dead tissue, folks. We found that out through the course of a freewheeling convo that touched upon the masochistic tendencies of that certain set of readers attracted to Ayn Rand’s atrocious prose, the threat of abject nuclear destruction that loomed over the heads of all the Cold War kiddos (in Combs’ case — literally) and somewhat lukewarm bowls of squirrel-brain gravy. Plus there’s that whole prolific Star Trek career he’s had as well …

Plus, we found out he has a Poe-etic side to him as well. Once this whole pandemic thing gets sorted out, maybe he and Stuart Gordon (the original brain behind the original Re-Animator) will get that one-man show going again about Edgar Allan. Darcy says it’s good — she’s seen it twice, and we’d be telltale heartbroken if he’d never say “nevermore” again on stage. And did you see that Bride cosplay?

Speaking of again and speaking of hearts (encased in torsos, stashed beneath floorboards and otherwise), there was another glimmer of hope that both Herbert and Dan would, like a dead cat, dog or dismembered appendage that gets soaked in reagent, arise again. Whether in House of Re-Animator or some other form, seeing the pair of crazed scientists older, wiser and a couple of decades closer to their own mortality would definitely raise the stakes.

And here are those totals, courtesy the hard-workin GIF creator supreme at Shudder Central …

But, your humble scribe has gotta admit — although Bride was good and got the maximum four stars from the big guy, it was not without its flaws. Darcy thinks Frank Henenlotter’s Frankenhooker is better. We still missed Barbara Crampton as Meg Halsey. I observed at least two misspellings in the production as well. (“Cemetery” was spelled wrong right before we got into the closing re-animated zombie jamboree and the acknowledgement of Mary Shelley also got her last name wrong in the credits as well. Yo, Brian Yuzna – if you need a proofreader when you get Herbert and Dan back together again, you know where to find me…)

But those flaws can be forgiven. With the power of four premier effects houses (stinks that we didn’t get the big Screaming Mad George experiments-on-a-rampage finale that was planned) and the skills of Alan McFarlane (he was the goop wrangler for the flick – look it up), it’s at least on par with Frankenhooker, which, by the way, DOESN’T HAVE JEFFREY COMBS.

The second flick was an Australian import from the early 1980s, the little-seen and super-leisurely paced Next of Kin, where the first hour and a half or so builds and builds and builds at a pace equivalent to that one old guy evacuating the Montclare House nursing home when all heck broke loose.

But before we dive Down Under into our second feature, can we all agree that JBB’s rant had to be simultaneously the driest and cleanest one he’s ever delivered?

As an influencer, we know that at least one Mutant out there who was about 15 Lone Stars to the wind fired up their Amazon accounts after hearing Joe Bob talk about the $1,600 Dyson Airblade hand dryer – the device that puts airport bathrooms a step above all the rest as far as manual sanitation is concerned. Good luck explaining that one to your significant other.

I don’t think anyone anywhere had History of Hand Drying, Part 1 on their rant bingo card, but in these challenging times, that grody spool of cloth, the continued pulping of trees by the Big Paper Towel Industrial Complex and the quaint Truman-era Model A hand dryer are neither the proper drying implement nor the technology our newly washed hand deserve. And who better to deliver this stream of information than the favorite son of Krankaway County where they know a thing or two about dirt.

Back to the movie. Not a ton of gore was there to be had in Next of Kin, but this four-star flick was kind of like The Changeling in that there was more about atmosphere, puzzlement, shot composition and mood than the three Bs. (But both of these flicks did have balls and wheelchairs.)

Because of that, we got lots of scenes of diary reading, ledger flipping, eavesdropping, sinister nursing home attendants and artistic shots of dead old folks. Plus bloody fountains, fork stacking, sugar-cube stacking, the movie’s opening scene actually happening about 45 seconds before the actual end and, oh yeah, the guy from Wolf Creek plays a romantic lead. Joe Bob said writer/director Tony Williams was kind of like the James “Buster” Douglas of horror directors — one really significant accomplishment in his field and he’s done. With this one, patience and a good attention span was key.

And let’s take the opportunity to lament along with JBB – the horror community probably did lose a great one with Williams not going back to the horror/thriller well. How many memorable flicks could have been? We can’t tell, but indy folks, don’t wait for the magic to happen when the right project falls into your lap, go out and MAKE THE MAGIC. It’s a process, and it starts by experiencing some inspiration and then acting on it to create something.

A flick like Next of Kin that is pushing 40 and so criminally underseen needs some time to gather its audience, so maybe a few on-demand rewatches are in order. Sometimes a clearer head is needed to connect all those dots that might get overlooked at 1 in the a.m. when you’re seven of your beverages of choice in on Saturday morning after watching Feature 1. I know that I missed some of these Drive-In Totals (courtesy of those Shudder saints who are saving me a ton of gratuitous typing).

It’s been four four-star flicks in a row now. I’m getting spoiled, and am dreading the first feature for next week, cause as the saying goes, all good things must come to an end … just like this blog entry.

For JBB to be playing this many GOOD flicks in a row, you just have to accept the fact that something BAD is right around the corner, and we’re going to have to be good and ready to erase our minds when the inevitable happens.