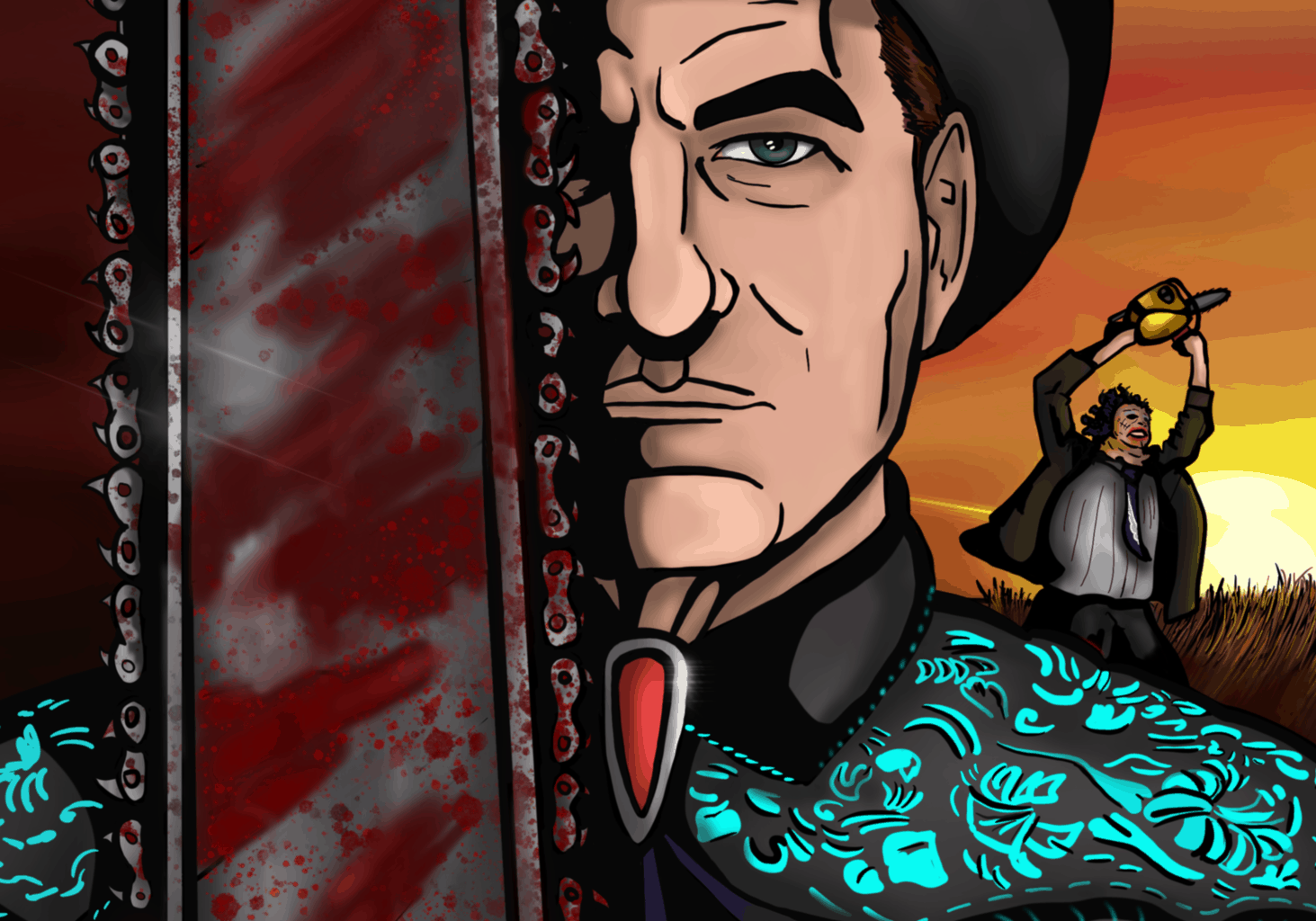 All we really need to know, we learned from The Texas Chain Saw Massacre

Every great slasher offers different life lessons. For installment two of Everything We Ever Needed to Know, We Learned from Horror Movies, the Gratuitous Blogger shares key lessons from Tobe Hooper’s classic — from the importance of fuel monitoring to reminding you to never promise more than you’d want to deliver. Shout out to T.J. Denton for his fabulous artwork and to Jenn, head proprietress over at The Joe Bob Briggs Fanzine, for letting us graciously republish the cover art from Issue 2. Now, let’s git to it…

Just a little farther. Let’s get just a little farther down the road and THEN we’ll stop for gas. FERMP! (game show buzzer) — wrong answer! If you think you need petrol, you do. The alternative to a few minutes’ inconvenience is bein stranded by the roadside in the hot Texas sun in a van without AC while one of you schleps it to the nearest station. Besides, wasn’t the last station Jerry passed just a little ways back? When it comes to Chain Saw, that’s your best-case scenario. Alternatively…

“A transport will be here in a few hours.” So says The Cook, one of horror’s most conflicted murderers. The scene in the pickup where he spends half his time tenderizin Sally with the end of a broken broomstick and the other half feelin deeply sorry about it is one of the most disturbing in all of horror. But we get it kids. You’re there to visit the old Franklin place. You learn it’s not that far so why not check it out? The alternative is hanging around a gas station where the Coke machine barely works, the BBQ doesn’t taste quite right, and a balding ginger with an Elizabethan forehead will only wash the bug splatter off your front fender if The Cook is around.

In deciding not to wait, Kirk and Pam, Sally, Jerry and Franklin do what all horror movie kids do: ignore the advice of the locals (see Slasher Life Lessons, Pt. 1 – Numero-Uno). Unfortunately in Chain Saw, a little patience is the difference between life and death. Why wasn’t that in Pam’s dog-eared copy of American Astrology magazine?

Numero-Three-O: Keep track of your knife.

Sure Franklin might tear up the van. Sure a switchblade is no match for a chainsaw. But any kind of weaponry is better than none when confronted by a 6’4” hick in a bloody apron wielding a Black and Decker in the Texas bramble. If you do manage to hold onto your knife, clean the blade before you go slicing up the “sausage” links will ya? That’s dag nasty.

I have a younger brother. I love my younger brother. In fact, he and I are about to hit New York City in November and I can’t wait. Why? Because he is nowhere as near as annoying as Franklin Hardesty. I feel a little guilty saying this. Yes, Franklin’s a whiny little bee-hotch, but he’s in a wheelchair. And he means well. He didn’t ask to be the target of a grisly hitchhiker, have his initials written in blood on the side of the Mystery Machine, and get appendectomied by the glow of a battery-operated flashlight. How was he to know the swimmin hole had dried up between them two old sheds?

Franklin was brought to life and rapid death by Paul Partain who was as hated on set as the character he played — partly because Hooper sequestered him, didn’t let him bathe and partly because Partain was a Method actor, whether of the Stanislavski, Strasberg, Adler or Meisner schools is another blog for another time. Until then, think carefully before taking long road trips with family. You’ll like each other even less than when you started, if you’re still alive.

No matter what Sheriff Jesus Maldonado tells you, graverobbin is a local business. You have to know the families to know which graves to pick. Otherwise, you’ll dig for hours to find that old Mrs. Jarviss got buried in her finest jewelry from the Jaclyn Smith collection at Kmart. No sir, this graverobbin was done by one family and one family only. It would take Hooper’s 1986 sequel for us to learn their name (The Sawyers) but we learned from The Hitchhiker in the original that they’ve “always been in meat.” Blech.

Numero-Six-O: If you find a tooth on the porch, run.

What part of I just found a cavity-ridden molar laying in front of a strange house makes you want to enter said house for help and think you’ll find anything other than “one of the most bizarre crimes in the annals of American History”? “Let’s go!” Pam pleads when Kirk lays the Yuckmouth artifact in her hand. Only a young girl in love would do anything but leave Kirk’s stubborn ass behind.

The fact that they don’t run screaming has always reminded me of a scene from Dario Argento’s Deep Red. The scholar Giordani is on the trail of the murderer. He knows who it is. The murderer knows he knows. One night in his apartment, Giordani senses a presence and grabs a knife for protection. But hey, it’s okay! It’s only a full-size cackling anamatronic puppet that’s burst into his room so everything’s okay! Of course, it’s not as Giordani’s teeth and then his neck will learn. But that’s the lesson Mutants: Never let your guard down when a murderer’s about.

Numero-Seven-O: Booty shorts will not save you.

The shot of Pam in her red shorts — tan bare back, rising from the wooden swing and walking with trepidation toward that white wooden house as a big blue Texas sky yawns above her — is a beautiful and foreboding shot. Tobe Hooper had an amazing eye and truly was an underappreciated craftsman. We miss you man.

Numero-Eight-O: Never – and we mean never – offer to do “anything they want.”

Despite what people think they saw in Tobe’s original, it would take the sequel for Chain Saw audiences to actually see the sexual themes, gore and technicolor violence they’d imagined in the first film. The only real reference to sex is when Sally tries to escape her kidnappers. “I’ll do anything you want,” she whispers, a world of horrific possibilities launching her into a fresh round of terrorized screams. I’m sure I’m not the only one who’s relieved that they don’t take her up on her offer. So when it comes to a choice betting letting a hygienically challenged clan of psychopathic flesh-eaters have their way with you and the end of the road…some things are worse than death.

This advice pains me. In fact, it’s a cryin shame. Gas stations, especially in sparsely populated areas of the rural South, often have GREAT food. Some even have a little meat and three café in the back where a lady named Teresa or Sandra will serve you the daily special. I’ve encountered a few with a dime-store book section! I discovered one of my favorite novels, American Appetites by Joyce Carol Oates, in a gas station near Black Mountain, Tennessee. But like Joe Bob, I digress. (Maybe that’s why I got this gig. That and the twenty bucks I Venmo him every week.)

Let’s trace the BBQ revelation cycle in TCSM. The kids grab some “beef” at the gas station. Clearly Franklin doesn’t like it, spitting out pieces of god knows what. Foreshadowing. Flash forward to a terrorized Sally, finding her way back to the gas station after Franklin’s brutal murder and what must have felt like an eternity of being chased by Leatherface through the Texas mesquite. Her safe haven doesn’t last. As she waits for what will be yet another ride straight into hell, she casts her glance into the gas station barbecue pit and lays eyes on what looks like a human torso. Am I seeing what I think I’m seeing? Yes Sally, yes you are. Never eat gas station BBQ.

Numero-Ten-O: The original is ALWAYS better than the remake.

Darcy may never speak to me again but there’s only one Texas Chain Saw Massacre and it’s the 1974 original. The sequel was a helluva ride but to change my mind, someone will have to write a response to match Joe Bob’s epic 22,000+ word article in the November 2004 article of Texas Monthly. But never fear @kinky_horror, next week the life lessons come from your favorite movie…