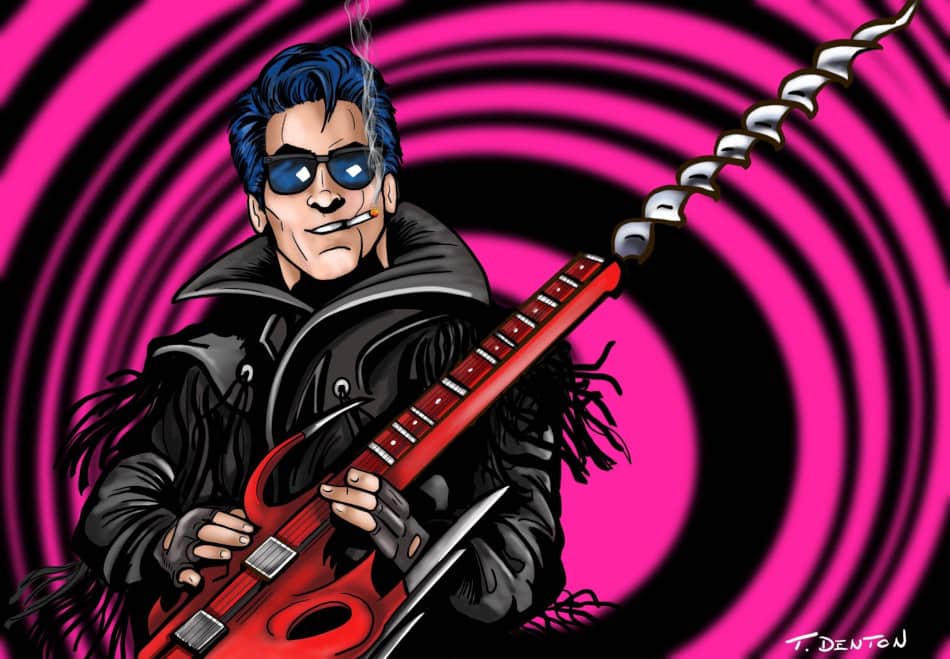 Slumber Party Massacre is not the seminal 1980s slasher epic people point to as the pinnacle of the genre, but it was still worth a watch.

Did this breakdancing leather-clad rockabilly killer really exist in Slumber Party Massacre 2? Does it matter? (Art by T.J. Denton @TDenton_1138)

As far as 1980s slashers go, it wasn’t the greatest, but it definitely had its own unique qualities

If we learned anything from Lou Gehrig, Joe DiMaggio, Cal Ripken Jr., or Ken Jennings (the guy from Jeopardy!), it’s that streaks eventually come to an end.

And with me having to flipflop my usual spot talking about the second feature of the Last Drive-In’s Summer Slumber Party twinbill with Laura because I had to coach a baseball game in the morning, my streak of seeing four-star spectaculars and staying up until 1 or 2 a.m. ended as well.

Not going to say Slumber Party Massacre Two-o was bad, but when compared with the maniacal likes of Tetsuo, Cannibal Holocaust and the other second features presented during Season Two, two and a half stars don’t quite measure up.

When you got a greaser rockabilly break-dancing pompadoured clad in leather frills waving a guitar around with a huge borer bit on the end, it ought to make for a good evening.

My spoiled Mutant mind sadly was wandering during the feature, especially since it wasn’t until almost 2/3rds of the way through the flick that we got our first confirmed legitimate massacre victim in the form of Rob Lowe’s little brother. Prior to that, it was all fake massacre, hand sandwiches and flash forwards, flashbacks, foreshadowing and fuzzy dream logic. Can you blame me, though? Looking at these Drive-In Totals, I had some slightly elevated expectations.

But a bunch of those totals were fakeouts and dreams and was there really a rockabilly greaser killer at all when we get to the end? It’s making Fulci look downright coherent…

That’s not to say that this episode didn’t present its own series of Last Drive-In Mysteries to keep us engaged:

Numero Uno: How did Darcy’s unicorn PJs defy gravity? (That’s between her and her costumer.)

Numero Two-o: How did the son of one of the richest guys in Detroit end up playing a dream-invading Fonz clone? (He auditioned).

Numero Three-o: How in the heck did the Driller Killer’s guitar play and drill when it was more unplugged than Nirvana during a 1990s MTV special? (Um, it ran on the souls of the people he killed or their dream fears? Maybe).

Numero Four-o: Whatever happened to the Mutant from Forbidden World (aka Mutant)? (Roger Corman ditched him, sadly).

And by watching SPM2, I did get to witness a 1950s-style slasher villain breakdance and perform three musical numbers during the climactic final chase sequence and isn’t that what a night at the Last Drive-In is all about?

Even if it doesn’t end up being in your All-Time Top 10 of All-Time, you’ve still seen something you haven’t ever seen and are learning something you’ve never known courtesy of JBB and Darcy, all while sitting in your pajamas. (It was a slumber party, after all…)

And speaking of things you’ve never seen, Laura’s going to delve into how the second part of the LDI Summer Slumber Party crammed a record number of guests onto the set for a showing of Victor Crowley, wearing their pajamas, no less. Check it out!