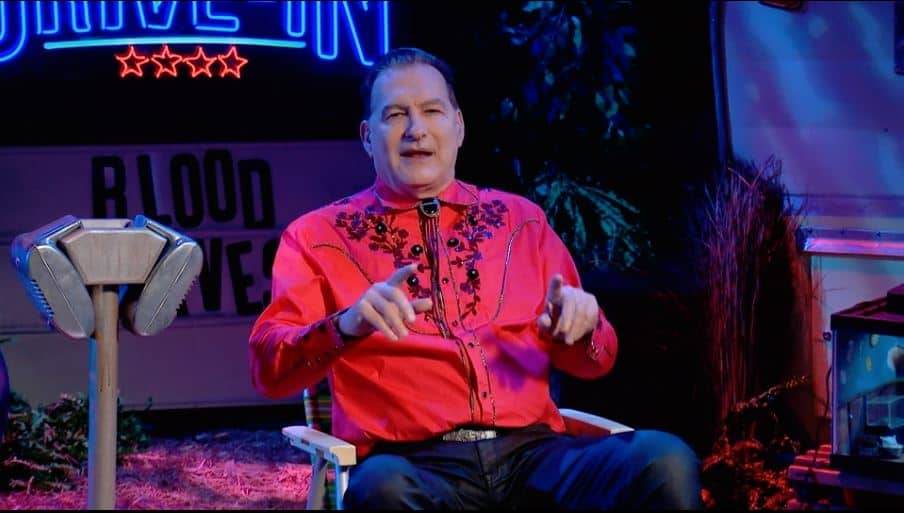 In Blood Harvest, Herbert Khaury gives a nuanced and indelible performance as a middle-aged man grappling with post-traumatic stress disorder following his parents’ brutal and untimely death. His nightmare intensifies as he struggles with even darker secrets that threaten the only home he’s ever known. Which will he choose: protecting his family or saving an innocent life?

Oh who are we kidding. Blood Harvest is a low-budget romp through the perils of foreclosure and unrequited love featuring Tiny Tim in his first and last film role as Marvelous Mervo – a delightfully deranged circus clown only slightly less disturbing than his sick fuck of a brother Gary, who never goes on a date without his trusty point-and-shoot camera, pantyhose mask and a bottle of chloroform. Gary’s love interest is Jill, whose only crime is Returning to Grafitti’ed Childhood Home While Female. In the film’s startling, pig-in-a-poke finale, Jill is saved by Tiny Tiny’s Wisconsin circus clown with a Staten Island accent in desperate need of some Crest White Strips. Cheap but never boring, Blood Harvest is uniquely disturbing and features one of the purest lines in all of 80s horrordom: “How about some meaningless sex?”

“Speaking of twisted vestiges of the 60s…” – Joe Bob Briggs

In his third showing of Blood Harvest across his katydid career, Joe Bob goes gives us a cockroach-themed serenade and tells us what we already knew:  Never book him in a retro boutique hotel with performance art shower, charm-void alcoholic Starbucks, and a lounge where some guy named Ian serves stone mustard from Provence (a/k/a Some Fuck Place). A Red Roof Inn or the Sheraton will do just fine.

Because Blood Harvest featured a coupla drive-in firsts – two guests, Justin Martell and Bucks Burnett, with unique insight into Tiny Tim – this week’s Gratuitous Blog features a second helping of Drive-In Totals, because you never know when you’ll be asked to rattle off Tiny Tim’s stage names at your next cocktail party.

You know how you go to a concert and it makes a band your favorite? You might have felt that way after watching Blood Harvest. How many of us followed Tiny Tim’s career? Probably few. How many people really knew the man? Probably none. But how many who read this blog and watch The Last Drive-In are weird in some way? Probably all. Tiny Tim flew his freak flag – in public, for a living – until literally the day he died. Ignoring doctor’s orders following a heart attack Tim kept right on touring, collapsing on a Minneapolis stage in 1996 while performing Tiptoe Through the Tulips and heading to that Great Flea Circus In the Sky just a short time after. That deserves a drive-in send off. Close us out Eternal Troubadour, and hit the lights on the way out will ya?

“I was always athletic spiritually, not physically” – Tiny Tim

Next Up: Time to get our prom on…