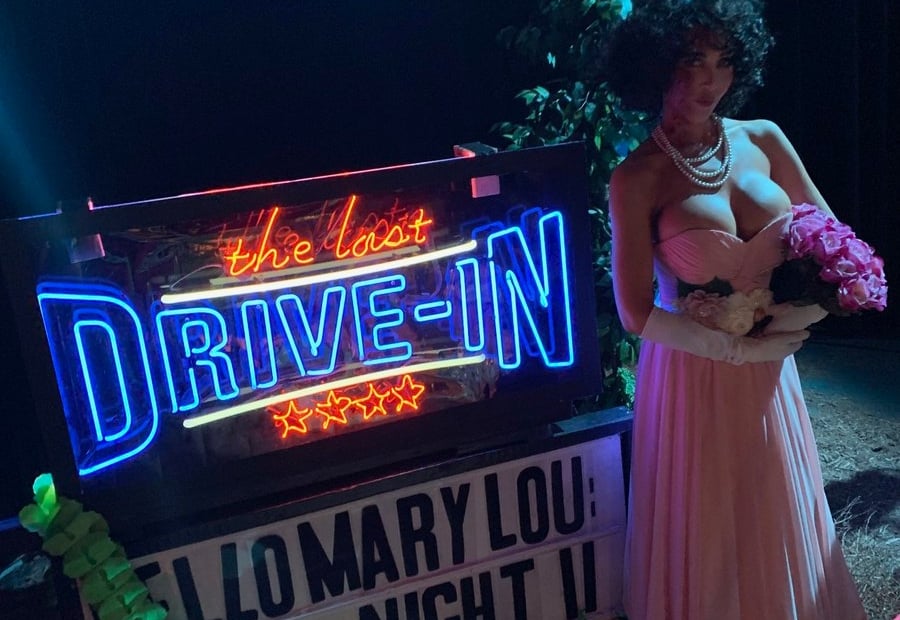 All we wanna do is dance with you.

We’ve Written Many Blogs, Many Times – And We’ve Loved Every Minute of It

This Gratuitous Blog starts where the last episode of The Last Drive-In ends – the crowning of Darcy the Mail Girl (a/k/a Diana Prince) as our Prom Queen. In honor of Hello Mary Lou: Prom Night II and for exemplifying the drive-in spirit, Joe Bob promised not to set her on fire because the Shudder insurance doesn’t cover that…and we can’t afford a fire suit. What a softy.

“On the last movie, we always try to do something about peace and harmony and unity and ending the hate” – Joe Bob Briggs

Thank god. Nothing says unity like the dead teenager, three-mile-island Fu in a prom dress extravaganza of Week 9.

Prom Night II’s opening shots present its major themes: haunted spaces, a crucifix, and a drama class trunk decorated with the masks of comedy and tragedy that let us know this Maple Syrup Slasher will be a little bit of both. Prom Night II kicks off with a 50s flashback to Mary Lou Maloney, a girl sorry-not-sorry for sleeping with many boys, many times. Freshly confessed and ready for prom in a dress that will prove sadly flame retardant, Mary Lou ditches her date Bill for who seeks revenge but accidentally sets her on fire with a stink bomb turned Molotov cocktail. Awakened 30 years later by the next generation of Hamilton High prom-goers, Mary Lou’s old dress – inexplicably stored and restored in the school basement – starts rumblin like a half-digested cheeseburger in a diverticulted colon, begging to be worn again.

Mary Lou’s spirit then inhabits the virginal Vicky who turns slut on us before she becomes a killer demon. On her way to recovery, two things about Vicky get bigger: her appetites and her hair. Because the only thing that says “I’m possessed” more than turning slut is the excessive use of a crimping iron. Pre-possession, her biggest problem was an uptight mother. After? An ill-advised attempt to shag her dad and a rocking horse she’ll never be able to look at the same way again.

Gratuitous Blogger confession: I was fully prepared to hate this “sequel” because I love the original. But Prom Night II is a damn compelling copycat 80s slasher with a magic all its own. On its way to being magically derivative, Prom Night II gets all the basics right:

The Who – Prom Night II’s right-sized character pool – including distinct female leads with distinct hairstyles (take that Demons and Demon Wind!) – is led by great performances from Wendy Lyon (Vicky), Lisa Schrage (Mary Lou), Richard Monette (Father Cooper) and of course Michael “Sign my ledger” Ironside – a man whose smile will leave you wondering if he’s happy to see you or just wants to kill ya.

The What and The Where – Bruce Pittman’s flickcoversThe Big Teenage Three: school, church and home. In Prom Night II, as in life, each one is a haunted space. Their looming exteriors fill the screen, reminding us of the film’s original title, The Haunting of Hamilton High.

The When – With the exception of maybe The Prowler, backstories with an 80s present day make for a great slasher. Why did Mary Lou wait 30 years to return? Who knows, who cares.

Prom Night II also features one of the most chilling and understated lines in all of horror (“Craig is so cool. What did he want to be?”) and a demonic jacuzzi chalkboard that was truly original, even if it – and most of the film’s other effects – was created by special effects team from A Nightmare on Elm Street. Which brings us to the inescapable…

Prom Night II is chock full of the teenage horror tropes and flat out rip-offs we never get tired of. Vicky lives in a very Carrie house with a very Carrie mom. Joe Bob notes nods to Argento, Mario Bava and of course The Exorcist, with references ranging from the direct (“The power of Christ compels you!” and HELP ME) to the subtle (over-wrought scotch-swilling priests) to the cheeky (“Linda Blairs-ville). All this plus a slew of character names that every Mutant will recognize – Carpenter, Hennenlotter, Waters, Browning, Craven, Dante, King and Romero – make Prom Night II meta before meta was a thing, even before Wes Craven’s New Nightmare. There’s plenty more. Father Cooper manages to find himself intoning inside a candle circle (Hellraiser), and the creepy sound-effects driven score after Jess dies feels a little like The Texas Chain Saw Massacre. There’s even a little Halloween III, Frankenstein, Poltergeist and The Fury thrown in and – for real 80s creds – a touch of Bonnie Tyler.

If you’re a slut in high school, you deserve whatever you get. So sayeth Joe Bob summarizing a typical theme in 80s slashers. Not so for Mary Lou. For the price of getting barbecued, she gets to be a slut forever, inhabiting body after body cause this girl just cain’t get enough. In Prom Night II, our Final Girl is actually dead and by the film’s end, becomes a Final Man in the form of her old steady Bill. And that’s not the only horror theme that gets turned on its crowned head:

No matter your verdict on Prom Night II, it honors Wes Craven’s motto: “Give em a hard on, give am a scare and send em home.” Speaking of Happy Endings…

Mutants, Can We Have This Dance?

The only thing better than losing your virginity on your prom night (ask me no questions and I’ll tell you no lies) is simply being asked to go. So – without further ado, plus a John Brennan Flippy dippy dip thrown in for good measure…

Mutants, will you go to prom with us?

The best thing about this gig – besides calling Joe Bob Boss Man – is making some of the best friends a Mutant could ask for. But this is hardly the end. During The Last Drive-In’s continued hiatus, The Gratuitous Blog continues with original Last Drive-In-inspired content (that hopefully won’t be treated like the pee break during your favorite band’s “Now we’re gonna play some of our new stuff” set) and some great Joe Bob classics. Because remember: It’s not who you come with. It’s who takes you home.

This blog dedicated to May Ellen Struthers, wherever you are. Special thanks to the Night of the Horrorphile Prom Night II podcast (@NHorrorphile) for the flammable prom dress and penis monster references.