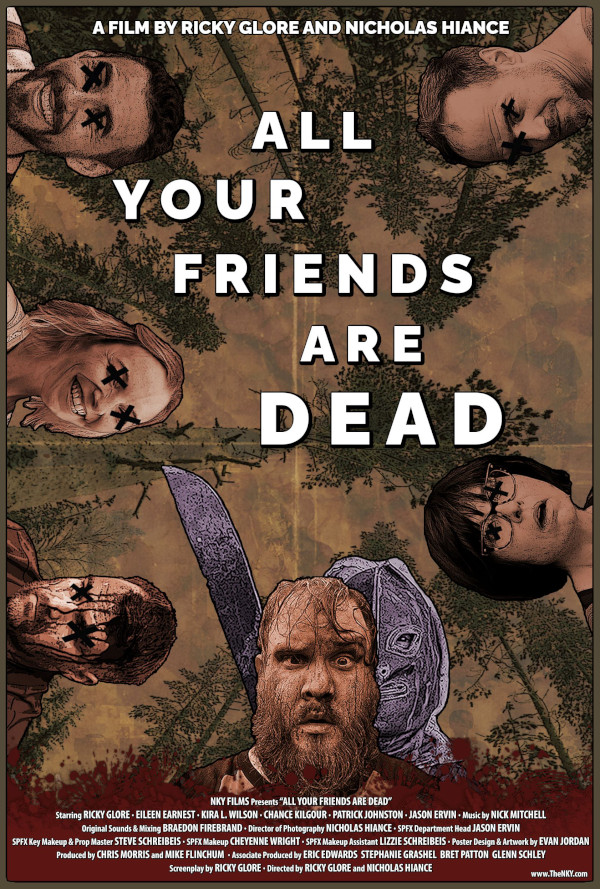 Ben Nagy reviews ‘All Your Friends are Dead’: Campout Reunion Saves a Life, Loses a Bunch of Others

Ricky Glore, a standup comedian by trade, decided he was going to make the first “middle-aged slasher flick,” so he pulled together about $6,000, wrote a script and then went on to star AND co-direct it with Nicholas Hiance.

Not necessarily in that order.

The result, All Your Friends are Dead, is scheduled to make its premiere in Cincinnati at the Esquire Theater on Thursday, Aug. 25.

And, given its budget, the flick, shot in Bellevue in northern Kentucky, has a lot going for it. For starters, when compared with other “middle-age”-oriented flicks, it’s funnier than The Big Chill, has more car chases than Baby Boom and also has more murders than Look Who’s Talking, Terms of Endearment and The 40-year-old Virgin COMBINED.

It starts out with a true sense of manic urgency as a big guy with a scraggly beard emerges all bloody, hops in an SUV and then takes a shower. Don’t worry — there’s no nudity. It’s just Matt Wilbee (Glore) — a former local star wrestler of the Class of ’04 and a former member of the “Pack” who got hurt in college and now is in a 15-year or so slump, post college flameout. From the start, he’s in deep industrial bean dip, but we have to figure out how he got there in the first place.

Once a big fish in a small pond, Matt’s about to lose his grandmother’s house to the bank. His career amounts to bussing tables, drinking the remainder alcohol from the half-filled glasses left on tables and cleaning the toilets at the local microbrew pub in between bouts of puking while his manager tells him he looks like crap.

Basically he’s the living embodiment of that one Bruce Springsteen song where the Boss calls a fastball a speedball for some weird reason because that’s how codgers in the 1950s talked. But this is not New Jersey and this is not 1984. This is Bellevue, Ky., population about six grand, and 2020(-ish). In his sea of desperation, dogged by the gnawing certainty that he’s a has-been and the good times have absolutely rolled right by him, Matt emails his old high school crew — Sarah, Derek, Greg, Larry and Lorie — and wants to rekindle that feeling of optimism he had during a post high school campout so many years back.

The response Matt gets is far from overwhelming, so he tells em between periods of shotgunning Natty Lights he’s going to go to the campsite and end it all, provided he can obtain some quality rope and learn to tie a noose (a great bit of business, especially considering the spottiness of phone reception out in the wilderness).

But his friends come through to prevent Matt from doing what he came there to do. However, unfortunately for them, Matt’s melancholy isn’t the most dangerous thing there. That happens to be a vamping masked, knife-wielding fiend in a tunic with a penchant for ballet who has bloodshed in mind, which gets us to …

Best Expressions of Depression: Matt — “I still plan on killing myself when you are all gone. This has just stalled my plans,” and “I think the best I ever was or ever could be was in the past. And that sucks. I think that I have served my purpose.”

Best Display of Excessive Douchery: Private-jet owning Greg, who tells Matt: “You look like s—, but you’re still alive,” and, when faced with peril, “He’s got a bum knee — easy pickings!”

Best Expression of Curiosity in Regards to the Psychological Effects of Wealth: Larry: “Being an angry, petty douchebag doesn’t make you brutally slash someone’s throat — does it?”

Best Way to Kick off the Bloodshed: You have to wait about an hour into the flick, but the body count starts with a slow-motion throat slicing when the masked killer shows up.

Best Way to Finish the Weekend: Two members of “the Pack” have a dinner date with some unusual libations.

Best Way to Silence a Loudmouth: A podcaster gets very a hot mic as penance in a mid-credits scene.

Three stars. Mandatory half-star deduction because no garbonzas, and there were a couple spots where the computer effects didn’t cut it — specifically during the double machete slash attack at the campsite, especially when compared with the practical effects later used during the chainsaw bisection, the hedge trimmer disemboweling, the corkscrew skull impalement and the finger amputations that we are treated to as the flick hits its bloody back end.

Still, I’ll bet you if you get Glore about $12,000 for the sequel he teased post-credits, he’ll double the body count.

If you’re in the Cincy area, check out All Your Friends are Dead premiering Aug. 25 at the Esquire Theater, but one warning — if you hated this one French flick with a plot hole that you could drive a truck through, finding out the identity of the Kentucky Fried Killer tormenting the campers likely will ignite a similar reaction.