An Evening with Joe Bob Briggs 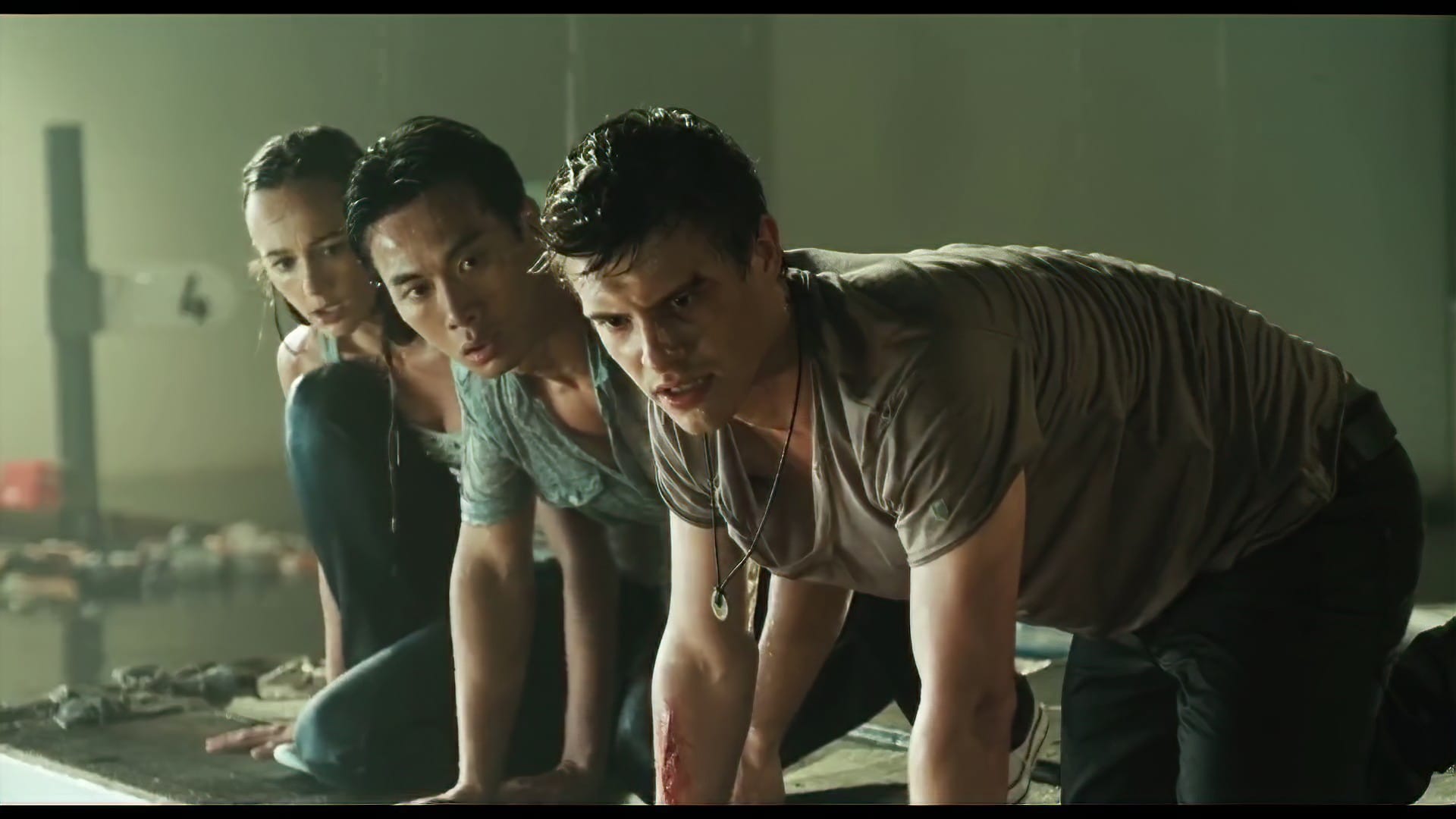 Ben Nagy Reviews ‘Bait’: It Takes a Lot of Planning to Have Sharks Attack a Grocery Store

Sharks invade an Australian grocery store after an earthquake and a tsunami in "Bait," a 2012 flick that serves as a precursor to the whole Shark-in-Weird-Ass Places genre.

But before we get into how sharks got into that weird place, let’s look at other creatures in weird places …

So this has happened.

Sometime in the past couple of decades, sharks surpassed cats as being the creature found in the most nonsensical places as far as horror movies are concerned.

And we’re not talking about in the Italian flicks like Cruel Jaws and The Last Shark.

Yeah, we had Snakes on a Plane, but let’s be serious for a second here. While it ended up tapping into a certain level of kitsch, that flick was really indoor bullstuff that had one gimmick – Samuel L. Jackson cussing and shooting at a bunch of snakes on a plane. (We’ll get into another of the same ilk that’s a bit more relevant to the task at hand here in a little bit). And that was just a one-shot thing … well, let’s say one-and-a-half shots. There was Snakes on a Train by the Asylum, but that’s almost even more highly concentrated in the indoor bullstuff department because they did that one to take advantage of the highly engineered indoor bullstuff explicitly intended to appear to be a drive-in flick that was Snakes on a Plane, and I believe they put Snakes on a Train on TV for the SyFy Channel where all the Asylum stuff tends to end up. (Or was it still the Sci-Fi Channel back then?)

Also, let it be stated here for the record that Venom, with Klaus Kinski, Oliver Reed and a bunch of early 1980s British character actors getting bitten in the gazebos and elsewhere by a black mamba, still reigns as probably the best killer-snake-on-a-rampage flick. It was the Numero Three-o flick ever reviewed by Joe Bob and got 3.5 stars. Do not even mention the CGI-fest Anaconda flicks that were somewhat interesting at the time but the only things that have aged well out of those are Ice Cube, Owen Wilson, J. Lo and Danny Trejo.

Need a lame jump scare before the gore set piece? Grab a cat. Funny or Die! did a video about it. Also of note, you may have heard that there was a terrifying Broadway show that spawned two terrifying movies. It was about cats.

Eventually the obsession with cats (at least in horror flicks) died down, and they tried to do the snake thing as the newest creature of shock, but what really, really caught on were sharks.

What happened was that the folks at the Asylum got together again in the early 2010s after analyzing why the whole snake thing never caught the public consciousness, and then producer David Michael Latt decided, “Hey, we’re going to throw a bunch of CGI sharks into a hurricane and then there will be a bunch of tornados and the sharks will fall out of the tornado and eat a bunch of people including the one guy from C.H.U.D. We’ll get the guy who played the rich jerk kid from 90210 and the blond from American Pie to be in it and then put it on the Sci-Fi Channel.”

And it worked. After dropping the first one in 2013, they came out with a Sharknado flick every year until 2018 and predictably folks (including Asylum) have been throwing sharks everywhere to capitalize on the Sharknado success.

But guess what? Although it got all the press and spawned a six-flick TV franchise, Sharknado didn’t actually start the whole Shark-in-Weird-Ass Places genre. There’s a movie called Sharks in Venice from 2008 that had em swimming in the canals eating people.

The flick we’re looking at this week also pre-dates Sharknado. Bait was originally released in 3-D and came out in 2012.

It starts out as an Aussie beach shark-attack movie, turns into a heist-crime movie and finally turns into a disaster movie within the first 25 minutes of run time all for the ultimate goal of becoming a shark-in-weird-ass-place movie and getting some dorsal fins on Aisle 7 next to the jarred preserves. It did take the stern commitment of six writers to figure out how to get one Great White shark stuck in a grocery store and another Great White shark into a parking garage, but in these early days of shark overload, they did it.

But, as that David Byrne guy once asked, “Well, how did we get here?”

Pretty straightforward, actually – an Austrailian beach lifeguard named Josh (Xavier Samuel) got too liquored up the night before, so his future brother-in-law and fellow guard has to go out to check a buoy to cover for him. A terrible-looking CGI shark fatally attacks the pal.

Cue the passage of a year of guilt and angst for Josh, and a break-up with his fiancee, Tina (Sharni Vinson, You’re Next). He gets a job in a grocery store far, far away from the water where life went bad. But he’s not too, too traumatized by the ocean because the place is called the Oceania Food Mart.

Then a bunch of people head to the store. An employee is accused of shoplifting. Her dad cop shows up and hauls her out to a nearby parking garage. Tina shows up with her new beau, Steven (Yuwu Qi).  Then two guys show up and hold the place up and kill one of the workers.

Then there’s an earthquake.

Then there’s a tsunami.

Then the tsunami flushes the sharks into the grocery store and into a nearby parking garage where this Paris Hilton-type girl with a yippy dog and her boyfriend were parked along with another store employee who was in his car.

Then all the people who survived the 45 seconds of tsunami carnage (being swept away, crushed by objects, etc.) have to do the struggle-for-survival thing. They fall into the water a lot and scramble back out onto the top of the dairy aisle coolers after getting wet a lot. Sometimes they make it before a CGI shark gets them, sometimes they don’t. (The practical shark effects in this one are much, much better).

But regrettably, beyond making a MacGuyver-esque shark-proof suit of armor out of metal racks and carts, the absurdity of the situation isn’t played upon as much as it could have been. Our handsome hero does not take the opportunity to yell “I’m tired of these mother f—ing sharks in this mother f—— food mart!” in an Australian accent. The screenwriters regrettably stick with the more Poseidon Adventure route by focusing on the human interplay that’s going on with love triangles and the surviving robbers being bad guys. There is no really fat guy taking one of those compressed whipped cream cans and shoving it uncomfortably into a manta ray. Did I mention the CGI sharks aren’t that great, either?

Still, it does have sharks attacking people in a grocery store. Not many flicks can say that.

• Best Failure at Surviving:  When boyfriend Kyle tries to rescue his girlfriend’s dog, sees the shark is after him and chucks it at the shark to serve as a diversion. Regrettably, he neglected to examine the situation from a predator’s point of view – why chomp a nugget when you have a whole rotisserie chicken ahead of you?

• Best Failure at Design: When Steven encases himself in a “shark-proof” wire contraption but they don’t make it so he can get out of it and come up for air.

• Best Cause of a Headache: A tsunami-propelled metal fan blade plows into some woman’s head.

• Best Deep Blue Sea homage:When the one guy gets unexpectedly bitten in half.

• Best-kept Electrical Grid: They must have a dang durable generator for this Australian grocer to have working power after an earthquake and a dang tsunami hits the place. Kudos to the manufacturer.

• Best Jaws 2 Homage: When the trapped folks use said still-functioning electricity to their advantage on one of the menacing sharks.

Kind of a rote people-menaced-by-creature flick while trapped by a disaster and takes itself a bit too seriously. Note: There is another movie called Bait. Jamie Foxx is not in this one.

Check Bait out for free on TubiTV, Hoopla or on ScreamBox. It’s also out there for rent on the major streaming services and on DVD and Blu-ray as well.

And just to give readers a bit of a warning, Screening Room reviews are probably going to be a bit spotty for the next couple months with a major project going on here that’s forcing me and a bunch of other folks to stock up on Visine so we don’t all end up looking like Catriona MacColl at the end of City of the Living Dead.  The next one will probably be in a week or so celebrating a very special occasion and a damn legendary Texan (and no, it’s not the one whose name is on this site).