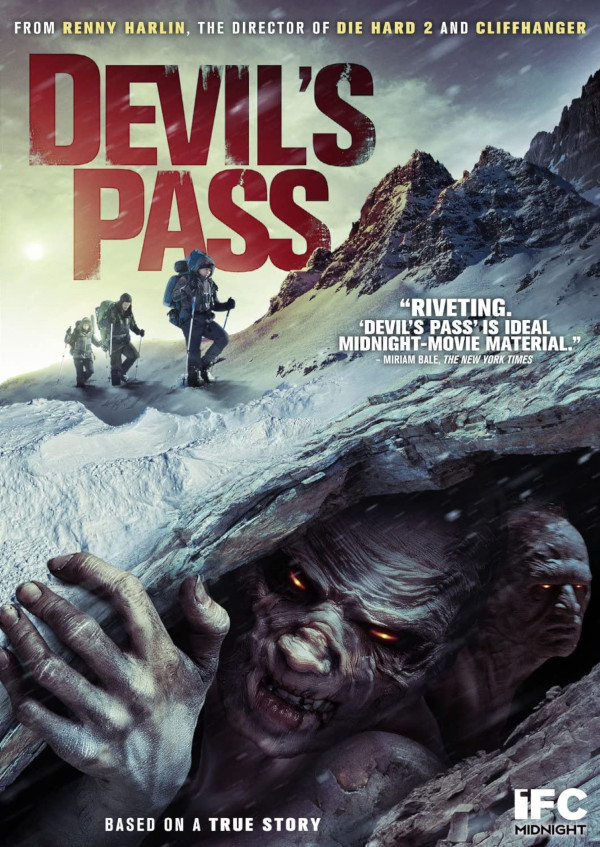 Ben Nagy reviews ‘Devil’s Pass’: No snow monster to be found and no Devil, either

After the last Bigfoot-Abominable Snowman-type movie I watched, I promised everyone that I’d go ahead and check out a better one because I couldn’t let the best movie I ever reviewed about an abominable snow beast be just one star. So I dove into the physical media dungeon in my basement and found a flick in a cardboard sleeve that I got from Family Dollar that looked like it had a couple of them on the disk. You can see em on the poster art and it sure looks like the creatures on there are somewhat abominable.

But, Renny Harlin and IFC Midnight, you misled me with Devil’s Pass. I’ve been doing this for more than three years now. They got me again with the art, thinking that it might be an indicator of what was in the movie. It got the people walking around in snowshoes, the mountains and the fact that there was indeed snow in the flick right, but the monsters at the end of flick in the secret Russkie Cold War bunker that’s locked from the outside and carved into a mountain aren’t snow monsters and the Devil also is nowhere to be found.

There are these two balding, bony, rail thin creepolas who teleport and hop between dimensions like albino speed freaks on pogo sticks paying a visit to the local indoor trampoline park, but there’s not a hairy shambling creature with claws and fangs in sight, not even among the evil Russian military. The bartender working at this townie watering hole that our intrepid U.S. college kids visit might’ve come closest if he’d have let his fingernails grow out long. So I don’t want people picking up this one expecting to see a rampaging snow monster like I did, then getting disappointed.

To note, the other promo art for the flick’s not much better since it shows a topless woman hugging herself while she’s freezing to death on the tundra. That part doesn’t happen in the flick, either, although there is a woman who gets picked up by an avalanche in her tent after aardvarking a guy, but she got a chance to put some clothes on before she died by ramming her face into the guy’s phone that he had been using to record the aardvarking session as part of documenting his “Trail Hookup” experience.

So in addition to not being a pure Bigfoot-type flick, Devil’s Pass also is another in that long, long line of Cannibal Holocaust/Blair Witch-adjacent flicks — found-footage tales about ill-prepared young adults deciding to go somewhere to go find something that ultimately they shoulda left alone.

In this case, the fate of nine (or was it 11?) Russian explorer-cicles who were found in the snow is what inspires our Oregon Ducks to head on over to Russia (without a fluent translator, mind you). They figure they’ll figure out what happened when, as the ominous pre-flick caption tells us: “These are the facts: In February of 1959, nine Russian hikers ventured into the wilderness of the Ural Mountains. Two weeks later, all nine were found dead. It has become known as the Dyatlov Pass Incident.”

That is a real incident — there are even articles online from National Geographic about it, and it had been the source of some pretty wild speculation as was vogue back in the 1970s when Leonard Nimoy had the network show “In Search Of…” where he talked about the Bermuda Triangle, Bigfoot, the coming invasion of killer bees and UFOs on PRIME-TIME TV. Think about that for a minute. If we’re worried about crackpots talking about lizard people running non-existent basement pizza parlors in their own little corners of the Internet, let’s think about how many millions of folks saw that show back in the day when there were three major networks.

At least Mr. Spock had a disclaimer.

Well, in this flick, Holly (Holly Goss) has a good supply of grant money to get her documentary project off the ground, so she ropes in four other folks to join her — Jenson Day (Matt Stokoe), the conspiracy-minded film student; Denise Evers (Gemma Atkinson), the audio engineer with two enormous talents whose eyelids freeze shut; Andy Thatcher (Ryan Hawley), the “expert climber” who hooks up with Denise; and moneyed explorer guy J.P. Hauser (Luke Albright), who spent time in the Himalayas and carries a big backpack.

They’re all going to fly out from Oregon to Kholat-Syakhl “The Mountain of the Dead” to the site where the Dyatlov crew met their ends, but we get treated to some Russian news report footage saying that the college kids all are missing. Mystical possibilities, UFOs and extraterrestrials are among the potential culprits, and a native elder guy says that there have been strange fireballs seen in the sky, and the area is “a place where you can step from one world into another into the world of spirits.”

After a bunch of interplay between the gradually more unhappy campers, there’s an avalanche and they find a bunch of Cold War crap in a lab with shoddy electricity and pictures from the Philadelphia Experiment and they talk about teleportation stuff before the flickering shaky cam footage treatment for 10 minutes as they get into Back to the Future 2 recursive temporal space-warp causality territory theory and all kinds of plot holes are created.

That’s not saying the flick’s bad. But even though they eventually eat a guy’s throat, those skeletal teleporting Gollum monsters bouncing around like seven-year-old kids hopped up on cotton candy and Mountain Dew on a trampoline set up inside a bounce house are a poor substitute for the satisfying blood spatter you get on lily-white snow drifts after people get their faces trisected by the furious (and furry) claw of an enraged abominable snow creature.

Best Brain to a Point: Holly thinks of everything. Not only does she have red spray paint so she can start doing re-enactments of the outlines of the dead people from the original Dyatlov party for an establishing shot for the documentary, but she also has a portable Geiger counter. But she’s also a box of rocks because she’s in charge of the expedition and doesn’t know who Velma from Scooby-Doo is.

Best Harbinger of Doom: In their Slaughtered Lamb moment, the bartender gives the kids the same shot that the lost expedition got.

Best Impersonation of a 1990s Goth-Industrial Music Video: The bald albino creepolas who have the power to teleport but are poor substitutes for Yetis have that weird shaky cam thing effect going that they started back then and carried over into every turn-of-the-century horror movie (House on Haunted Hill remake, etc.) since.

Best Low-brow Humor I Could Come Up With: According to a news article about the Dyatlov Pass incident cited in the flick, looks like Igor’s right-hand man was named Semen.

Even though Abominable had more snow monster in it than this one, going to give Devil’s Pass two stars, but Renny, director of Cliffhanger, Deep Blue Sea, Die Hard Two-o and numerous others, has done better.

Check it out streaming on AMC+ and TubiTV and elsewhere or get the physical media.

Next up: The Screening Room will be on hold the rest of January. However, readers, prepare yourselves for the amazing fury of the theme month that will be … KUNG FU-BRUARY!!!