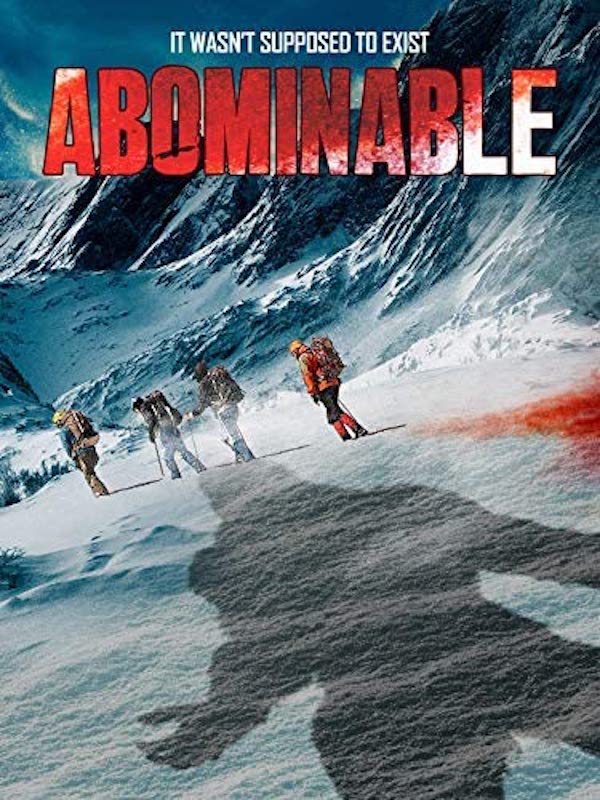 Not gonna get into what the difference is between the Yeti and Bigfoot is because I really had a tough time explaining to my wife that you can’t just go calling Sasquatch the Abominable Snowman a year or two back. And then she forgets that and then about every three months or so I have to give her a refresher course because I don’t want our kids growing up with a confused understanding of cryptozoological concepts.

The Cliff’s Notes version is that Yeti and Bigfoot are both hairy hominids, the Yeti has light fur because he hangs out in snowy places while Bigfoot is in the woods. The Yeti’s main hangout is the Himalayas while Bigfeet are everywhere that there are woods. These nuances are tough to express sometimes, but they absolutely matter.

Also, Yeti can have big feet, but it’s not Bigfoot.

Let’s all show some sensitivity. The creatures have a hard enough time proving their existence in this cold, cruel world where the suburbs are crowding in around them, so the least we can do is to do our best to recognize the differences between em.

Now that that’s out of the way, take a look at this picture and try to answer me this question.

Why do old guys wear their stocking hats like this?

This whole thing concerns me because the white hairs in my goatee are starting to get a bit more plentiful week by week. I’m concerned that a couple of decades from now, I’m just going to wake up one autumn or winter morning and start putting my hat on wrong like that. Living in a cold Midwestern state, it’s been drilled into my head that the correct way to get maximum protection from the winter elements is to yank that thing down to the first cervical vertebrae and over both earlobes.

The only reasons I can possibly think of wearing a stocking cap on the top of the head that isn’t covering the ears are that A. The guy has ears that get unusually hot and are a source of radiant energy or B. The guy’s got wax buildup in his ears and he’d rather hear than keep his ears warm.

I guess those are practical reasons, but then why do the eggplant squeeze to it where it has an indent right above the top of the skull? It can’t really serve much of an aerodynamic purpose because if you were going for speed, you’d slope that hat back sort of like the helmets the speed skaters wear in the Olympics or the time trial bicyclist guys in France. Maybe he’s trying to look attractive to a Conehead. They’re from France.

Winter headgear style choices aside, this guy with the cold ears is the first victim in this Yeti flick I watched called Abominable and I’m going to be honest right here a few paragraphs in and say that if it were a Bigfoot flick, it would not even be sniffing the Top 10 Bigfoot flicks I’ve seen.

The old guy’s name with the weird stocking cap is holding an iced-tea dispenser jug containing the blue-flowered “Yeti plant” and his name is Dr. Martin. I’ll get the shoe joke out of the way — he just can’t hoof it fast enough to get away from the Yeti and should’ve bought some Nikes. He’s also the first of two characters to get drug off screen and killed by sound effects. Only two of the victims in this flick die that way, so to his credit, director Jamaal Burden added variety and got creative with some of the other kills thanks to the execution by SFX artist Joe Castro and a pretty good creature suit done by Nyssa Nightmare.

The setup after Dr. Martin’s sole departs this mortal coil (that’s the last shoe joke of the review) is that a bunch of military goofheads wearing Sherpa hats and brandishing assault rifles with scopes have come to see what happened to the research team that was operating there. They press play on a tape recorder and the guy mutters stuff about a specimen showing great promise but there’s something “amongst” us in the woods.

To keep things going, other folks have to go out into the snowy woods. Sarah (Katrina Mattson) and Victor (Brandon Grimes) at least have their stuff together and do some military tactics while they’re out being stalked by the monster.

There are gratuitous crow sound effects as they’re traipsing around in the snow, and by God, I looked it up and there actually are crows in Nepal.

The surviving members periodically check in with their tech guy at the research center a lot, realize they have to split up, set some beacons at alpha and beta locations, get to a high point, rewire the beacon’s mainframe so the old outdated algorithm that was programmed five years ago (presumably by Doc Martin) can be updated and so then they’ll be able to bounce signals and update headquarters on the new pickup zone before a storm they’ve been tracking comes in from the east.

But things get more complicated because they are actually in an isolated prehistoric circle where the scientist leader says that snow looks older than regular snow and there’s a bunch of interference from metallic deposits in the surrounding area that are messing things up too.

At that point, I realized that none of the folks involved had bothered to read this guy John Bloom’s book called Eccentric Orbits because one Iridium phone would have solved all of the problems this elite military scientific crew had been having and they could have just been sitting in the abandoned lab fortifying it from Yeti attacks and sipping Swiss Miss from their military-grade Thermoses while the dang chopper showed up to evac them out, so I’m just going to get on with …

Best Effect: When one military guy is punished for not aiming at the Yeti’s head by getting his arm and then jaw ripped off in a good gore moment.

Best Way for the Doc to Introduce Pathos: “I don’t care if you think I’m stupid. I know there’s a probability this plant doesn’t exist. I’ve been searching and studying this miracle plant for two years, and six weeks ago, I was diagnosed with brain cancer,” says Dr. Smith (Amy Gordon).

After that speech, Dr. Smith starts clutching her head in her scenes to show that she really has brain cancer.

Best Way to be Redundant in Your Documentation: The prior doctor at the research station did an audio log on cassette tape as well as a diary. The diary had the secret Yeti drawings in it.

Best Himalayan Beauty Treatment: The Yeti rips a guy’s face off and then tenderizes his back.

Best Way to Preserve Authenticity from a Climatic Standpoint: I’m going to go out on a limb and say that flick was NOT filmed on location in the Himalayas. But it was done in real cold conditions cause you can see the actors’ breath. The credits say it was filmed in St. Petersburg, Russia, and in Poland. Did not get to listening to the director’s commentary, so maybe?

Best Way to Make Your Yeti Invincible: If the beast rubs the blue flowers of the Yeti plant over its body, it cures bullet wounds instantly. Like seals them up and presumably removes the bullet as well.

One star. Even with the standout effects work, there was just too much talk about beacons and rebooting mainframes to reset the triangulation coordinates for a Yeti flick to survive. Buy a copy of Eccentric Orbits instead if you want to learn about high-level geolocation through satellite networks (and I’m not doing that to suck up to the boss).

I’m going to have to review another Yeti flick in January just so that this one is not the best Yeti flick I’ve ever reviewed by default. (It’s been a long, long time, but I vaguely remember I might have caught Snowbeast when I was a kid on the Saturday monster flick they used to play here in Cleveburg, so it’s not the best Yeti movie I’ve even seen in my life by default.)

Check out Abominable streaming on TubiTV and elsewhere, as well as on physical media.