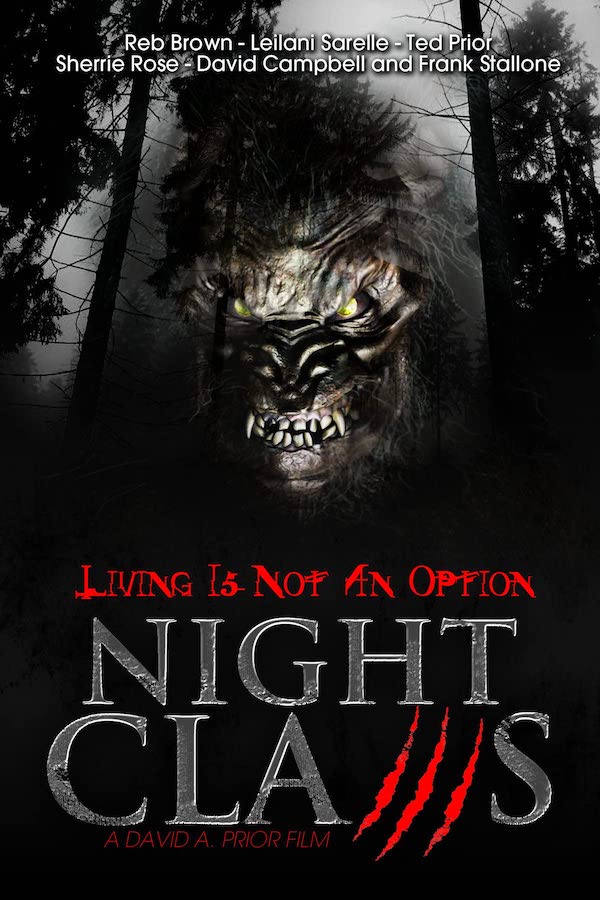 As the saying goes, we’re not quite out of the woods yet … cause there’s one more Bigfoot/woods flick I wanted to check out.

But first, a digression.

If you’re of a certain age like me and grew up watching a lot of cable TV in the 1980s, there was one Italian flick that mashed up Conan the Barbarian and Star Wars and had an all-time great song that imitated Queen’s theme for Flash Gordon that stood out above all the rest when it comes to prehistoric post-apocalyptic insanity.

I’m talking about Yor, the Hunter from the Future.

It was chopped down from an Italian TV miniseries called Yor’s World and then was released widely in the U.S. by Columbia Pictures, then a subsidiary of Coca-Cola (yes, that happened). The publicists had the foresight to invite a certain World’s Greatest Drive-In Movie Critic to check out the movie’s world drive-in premiere at the I-45 Drive-In in Texas in August 1983. Joe Bob took Wanda there, checked the flick out and gave it three stars while appreciating the extravagant junket to which the Coke folks had treated them.

And speaking of star treatment, the star of Yor was drive-in legend Reb Brown — MST fans’ll remember him as the good guy from Space Mutiny. Unfortunately he hasn’t been in much the last 10 years. I hung out with him a bit when he was at the Akron Comic Con a couple years back and got my Yor poster signed, which has ABSOLUTELY nothing to do with the movie itself. It’s pretty amazing, but back in the day, even though they had the foresight to have JB watch the premiere of Yor, the publicity crew at Columbia couldn’t be bothered to make Reb put on the Garth from Wayne’s World wig he wore during production, or get the same actress who was in the movie to be on the poster or, lastly, have Yor fighting something he actually FOUGHT in the flick.

Instead, he got short hair with some extra who wasn’t in the flick hanging on his leg while the flying saucers from the Space Invaders video game cartridge surround him while he’s standing on top of a mesa wielding a tomahawk. He did have a tomahawk in the flick, so that was the one thing they got right.

Anyhoo, talking with Reb was a great experience, and you can check out his official Facebook page and his official website or listen to his Yor Blu-ray commentary to learn more about his experience of making the flick. He’s got plenty of stories about doing drive-in flicks in Italy and he didn’t even get into talking about how he was Captain America.

The reason I went on about Reb and Yor is because the finale in this series of woods flicks is the last one he’s had the lead role in to date. It’s a Bigfoot flick from 2012 called Night Claws directed by David A. Prior, the same guy whose first flick — Sledgehammer — opened The Last Drive-In’s VHS Night in Season 3.

Prior starts out this one a la Jaws, or, maybe a more appropriate comparison would be Grizzly, since that one happens on land in the woods, with two “teens” who look about 10 years past teenagehood getting killed in rural Morningside in Mobile County, Ala., while aardvarking in a vintage red Chevy.

The bodies are discovered, so Sheriff Joe Kelly (Reb) orders the place shut down since they don’t know whether it was an animal or a crazy guy on PCP. The sheriff and his deputy might start dating at some point, but they have a couple of homicides to investigate before they get to go out to the town.

While that’s going on, this crime boss guy Col. Hunter Crawford has some binoculars and two henchguys with well-maintained hair express their desire to get the law out of the woods because they’re looking for Bigfoot.

Two couples and a wilderness guide named Sharon Farmer are going on a three-day survival trip and the two guys immediately get into a standoff because the one guy Ed mentioned he grew up in New York and had never been camping before with this guy Charlie Parker (played by David’s brother, Ted) explaining “I just get a little pissed off really fast.”

Professor Sarah Evans and her assistant Thomas Abelman get wind of the attack and decide to head out there, talk to the sheriff and then talk to a guy named Cooter who farts and pounds beers in a local bar, does a Quint monologue about how he went raccoon hunting with his dog, also named Cooter, shot a Bigfoot and then was besieged by another Bigfoot while he was chopping wood behind his trailer and he thought the Bigfoot wanted to have sex with him. This is the best part of the flick.

The survival campers get attacked at night and you can’t see anything and three of em get killed. There’s a beer party in the woods and like seven partiers get killed, but you can’t see anything. Everything got shot day for night, and it’s “dark” in the woods but no one has a dang flashlight and you have to jack the contrast up to its highest level to see even the guy in the Sasquatch costume drag folks so they can get killed off screen where we REALLY can’t see em.

Best Grip: The guy in the initial makeout scene gets his feet ripped off at the ankles somehow as he’s getting dragged out of the car, meaning the girl he was aardvarking had either the strongest grip in the known universe or he had the weakest ankles on the planet since there was a Bigfoot on the other end of him and you’d think he’d be able to win a tug-of-war with a topless twenty-something.

Best Reason to Solve the Crime: This government guy named Aldrich mentions a puppy (or maybe poppy?) festival that gonna bring hundreds of thousands of visitors to the township and they depend on the income too much to have the woods shut down because of a rampaging Bigfoot.

Best Guess: The county coroner with a stutter (Tracy Miller) expresses his infatuation with the professor’s hand care regimen and suggests that a man on PCP or with a gardening tool could have hacked up Sandra Sanders, the topless blonde who got turned into meat loaf.

Best Exhibition of Alpha-maleism: Charlie Parker tells one of the henchguys “You want a piece of me you big, ugly Deliverance-looking asshole?” and “Do me a favor, put the gun down. Act like you got a pair,” then he fatally throat-punches one of the henchmen.

Best Reason to End the Relationship: Charlie’s wife Cindy gets told to “shut up” at least five, six times. She gets sick of it, but it doesn’t really matter much in the end.

The ending disappoints because the characters the flick spent the whole time developing get written off and while anyone can and does die at anytime, the final sequence in the woods is unwatchable because, again, you can’t see anything. None of the characters carry flashlights and, much like the last flick I reviewed, they shot day-for-night, overused the night filter and so you have to monkey with the brightness settings in order to make anything out).

So regrettably, Night Claws ends up being a shaggy dog — sorry, Sasquatch — flick that has a minute-and-a-half Frank Stallone appearance as its punchline to explain why the colonel was in the woods. Reb Brown also does not get to fight a Bigfoot and just talks a lot, which is a major disappointment since he killed two dinosaurs and destroyed ape creatures, fire mummies and the guy from Tenebrae in Yor.

The flick is available to stream on Plex, can be purchased on Amazon and is out there on physical media as well. Reb aside, it’s not worth the $18 or so it costs these days to track down the disc. I also hesitate to say to check it out, because it doesn’t even crack into our all-time Top 10 Bigfoot Flicks list, which has on it, to date:

Next up: What do you get when you mix the name of Gwyneth Paltrow’s ex’s band with a bunch of rockhead snowboarders?