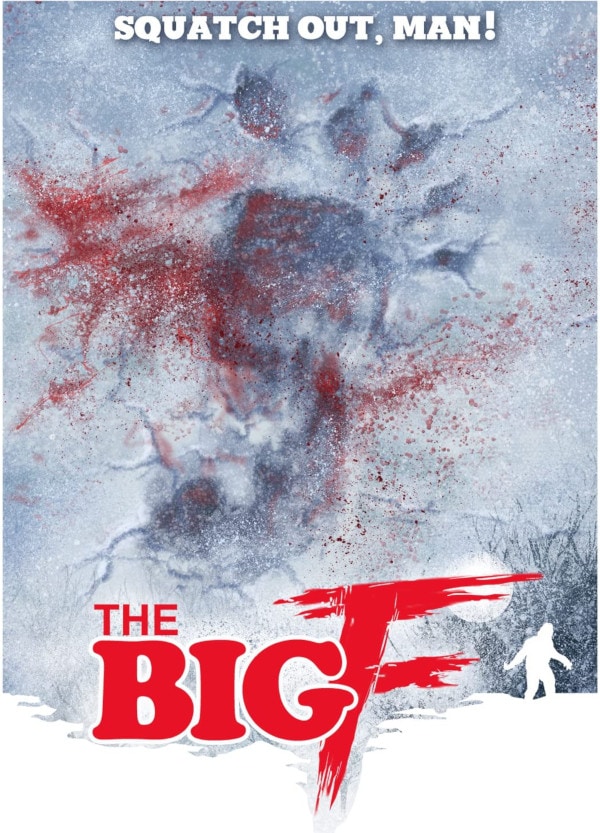 An unconventional-looking Bigfoot is trying to find the perfect love match in the suburbs on Valentine's Day in the 2016 flick "The Big F."

It’s that, like that greasy guy wearing too much cologne at the club as closing time approaches, Bigfoot gets all pheromonal when there are nubile victims and possible competitors around. That’s also why the Bigfoot in Cherokee Creek got all riled up. If there’s a bunch of guys in the woods peeing and spilling their seed all over their Carhartts, Bigfoot gets defensive, territorial and nasty. There are bound to be consequences.

But maybe the hairy creature has a sensitive side as well? Is the creature that haunts podiatrists’ nightmares misunderstood and just wants to live the dream of being a lovable lumbering lummox who shares a humble wilderness retreat with just the right female who can withstand his pungent, earthy aroma and his matted primordial pelt?

Those are the cryptozoological questions that Brian Papandrea, the writer and director of The Big F, tries to address in his own special way in the second-to-last Bigfoot flick we’re reviewing this month. We do mean special.

First off, we start with a topless woman running in a bunch of trees with snow on the ground. For a second I thought I might have turned on a Yeti movie (those are the white-haired ones that live in the Himalayas and blend in with the snow) since it looked to be winter, but before I can ponder this possibility any further, we do the typical Talking Heads trope of a flashback to about a half-hour prior in story time that helps the viewer figure out, “Well, how did I get here?”

And we do find out. A guy in a pseudo-Eastern European accent (Nathan Rumler) is playing a special game of chess on a backgammon board with an unidentified growler. A visitor arrives. Accented guy introduces himself to the suggestively dressed lady at the door as a “Doctor-scientist-brother” (he’s later credited as “Doctor Scientist” in the credits) of a guy named Bill to Lacey (Mia Campbell), a prostitute who says she’s not a prostitute but acts like a prostitute there for a “job.”

The nature of the job turns out to be pleasing “Bill,” the growler who’s in the cellar. Lacey thinks it’s a role-playing deal where the guy confined down there is cosplaying as Bigfoot, and we couldn’t really blame her.

Bill Bigfoot doesn’t really have the typical look. The costume was basically the lower half of a gorilla or bear costume, no mask or extensive prosthetics to speak of, and a long gray wig that essentially made Rumler (who did double duty as both Doctor Scientist and the creature) look like Christopher Lambert playing Gandalf or Bill Moseley’s Otis from the neck up with the lower half of an Ewok grafted on.

And speaking of lower half, the running joke is that, well, Bill Bigfoot isn’t that big when it comes to his whangdoodle and that could be part of why he’s being so ornery. Lacey herself is not at all impressed by what she sees, bursts out laughing and then flees topless into the snow outside after Bill attacks Doctor Scientist in a frenzy.

As is required for any horror flick’s opening setup, the monster corners her at a tree and that’s that.

So we need to get more folks involved now that Bill is looking for love in the suburbs on VD Day.

The main guy ends up being Mark “Maverick” (Papandrea’s character) who delusionally thinks he’s pals with his neighbor of six years Chuck whose snowblower Maverick has taken hostage.  Maverick is proud as s— to be an American and hasn’t put the Christmas decorations away even though it’s mid February. His constant uniform consists of a Yukon hat with the fur and flaps, a bathrobe and shorts. Maverick also doesn’t respond immediately while his wife is being ravished by Bigfoot because he’s watching “Ghost Farts” on TNT. He’s basically the most-entertaining thing about this flick.

We also meet a college-aged girl, Jenny (Sadie Tate) who’s house-sitting with plans to have her cousin and two guys who are members of an improv troupe over for a Valentine’s Day hookup with drinking and drugs until Bigfoot invades. Everybody in the neighborhood girds for conflict, which gets us right to …

Best Way to Prep a Human: Bigfoot cooks a victim in a burn barrel and eats him.

Best Reason to Not Take a Guy to a Party: All Vic (Patrick L. Dear) does is express his concern about his newly discovered allergy, “Well, I just found out I have a gluten allergy, and I can’t drink beer if it has gluten in it, and if I can’t drink beer, then I can’t have fun.”

Best Way to Defend Yourself When Face-to-Crotch With Bigfoot: Maverick punches Bill Bigfoot in the whangdoodle to get away.

Best dialogue: Maverick, hands down: “Sure, I’ll admit, yes, I’m kinda drunk, but that doesn’t excuse the fact that there’s a Bigfoot in my house and he just killed my wife,” and “There’s a Bigfoot. It’s come to our town and it wants to eat us and rape us at the same time,” and “Bigfoot’s got a tiny-a– pecker, man!” and “Bigfoot will only let you see or hear him when he wants you to,” and “I eat careful for breakfast and shit safety for lunch.”

Going with one star here. While it had some blood, a few breasts and the one beast, there were no vehicles flipped over as is required in any Bigfoot flick and Bigfoot didn’t look like Bigfoot.

You can check The Big F out only on physical media through a bunch of different retailers or you can do the true Mutant thing and buy the exclusive Blu-ray straight from the crew at Rock Bottom Video. Do it for Maverick!

Next up: Our Bigfoot Month concludes with a rediscovered (and just rereleased) 1980s classic.