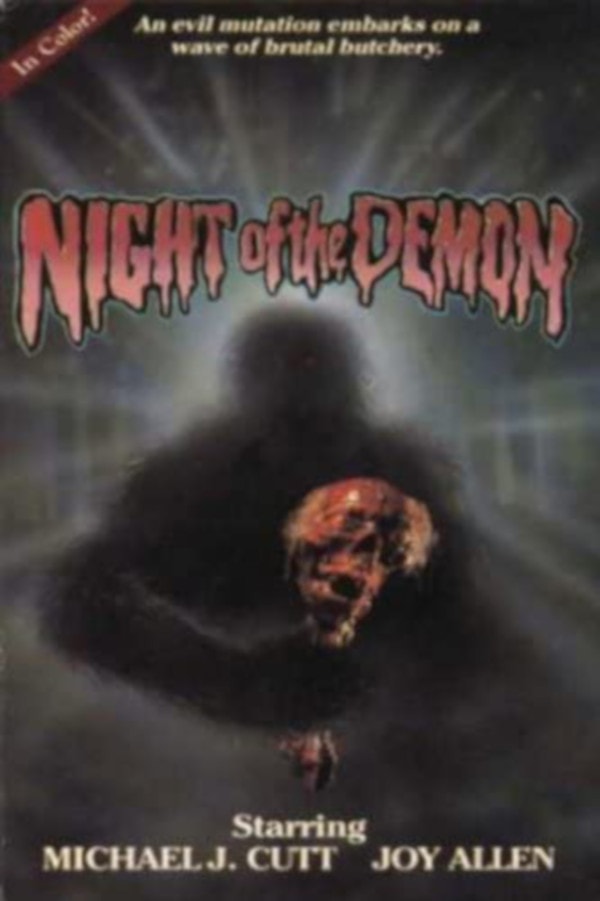 Ben Nagy reviews “Night of the Demon”: We Bag a Great One as Our Annual Search Concludes

It has the pacing, soundtrack and docu-feel of a 1970s made-for-TV movie or Charles B. Pierce’s two classics The Town That Dreaded Sundown and The Legend of Boggy Creek, but just a couple minutes into Night of the Demon after a guy gets his arm torn off at the shoulder and staggers around clutching some lunchmeat where his arm was supposed to be, we know that this Sasquatch means business.

We also know from the initial dialogue that Professor Nugent (no relation to Ted, which would have been an ENTIRELY different flick — or maybe not), who has half of his face burned off, took some students and a relative of the guy who got his arm ripped off into the California woods to investigate Bigfoot.

But, if you think that they’re just gonna have those five folks on an academic field trip get offed and call it a flick, you’re underestimating how ambitious director James C. Wasson and writer/producer Jim L. Ball were back in 1980. See, this was released contemporaneously with Friday the 13th. When the body count expectations in horror flicks rose when everybody started doing slashers, they needed to add some quantity.

So they made Bigfoot get creative. While he doesn’t stomp on anyone’s head in this one so it squishes like a melon in a Troma flick, the rampaging Sasquatch makes a couple of Girl Scouts kill each other in the ultimate “stop stabbing yourselves…stop stabbing yourselves” moment, uses an ax to kill a woodsman, offs somebody with a pitchfork and directly inspires a kill that a Friday the 13th flick ripped o…er…paid homage to about eight years later.

Hands down, this is the seminal Bigfoot flick because:

So, yes, “seminal,” in all of its uses, would be the most apt description for this flick.

But the problem that this one ran into was its limited release in the grindhouses of the early 1980s. Also, Lee Majors had fought Bigfoot three or four times on “The Six Million Dollar Man” on primetime broadcast TV with diminishing and hokier results as the 1970s drew on. So no one knew Night of the Demon was the greatest killer Bigfoot flick because “Bigfoot” or “Sasquatch” was nowhere in the title by design (except in foreign markets), and the original poster art was just the picture of a full moon rising over the woods. Further messing things up was that the whole obsession with UFOs and cryptozoology had hit an ebb by the time Reagan got elected. There also might have been some confusion as well because there was also a British flick from the 1950s called Night of the Demon.

That’s a shame because this flick deserves some rediscovery. Not only do you have Bigfoot tearing off whangdoodles and killing folks in about 900 flashbacks, but you have a Bigfoot-worshipping cult ritual subplot where every few months they throw a woman named Crazy Wanda on a folding table with a red tablecloth (because Satan) so that Bigfoot can impregnate her with the seed of Moloch. They wedged in about 10-15 minutes of Rosemary’s Baby and The Devil’s Rain AND teased that there were cannibal forest people roaming the woods.

The best part is that Professor Nugent (Michael Cutt) is so smart he’s stupid and too busy telling flashback stories to actually ensure the safety of the folks he has with him on the field trip. Booksmart doesn’t translate into woods-smart in this case, so we all know what that means. As the boss says: Anybody can die at any time.

The acting varies from wooden to hysterical, which means added entertainment for the audience. The reaction of a topless woman whose boyfriend got dragged out of their shagging van by Bigfoot, who then cleans the windshield with the guy’s entrails, and the performance by the recipient of the whangdoodle detachment are worth the price of admission alone. But then you get to the Sasquatch melee at the end, and, well, it’s enough for me to give Night of the Demon a pass that the monster didn’t flip over a vehicle over the course of the film.

Best Way to Get Lost: Professor Nugent to his student, “Wherever we go from here, I’m leaving it to you to plot it out. It won’t be accurate, but at least we’ll have some orientation.” Dammit, Jim, he’s an anthropologist, not a cartographer.

Best Kill for a Future Iconic Slasher to Rip Off: Bigfoot does a spinning hammer throw of this camping goof in a sleeping bag, gets about seven yards of distance and the guy sticks the landing, getting impaled on a protruding branch before bleeding out.

Best Way to Get Smoky the Bear and the U.S. Forestry Service on Your Hiney: After throwing some gas on the ground, shooting a gun in the air, and interrupting the sex ritual they stumble across, Professor Nugent and crew say they’ll just let the Satanists put out the forest fire because it’ll give them something to do overnight.

Best Example of Ivory Tower Detachment After Witnessing an Attempted Sex Crime: “It was some kind of ceremony, but what was really interesting as far as we’re concerned was that it was centered around a huge anthropoid-looking effigy,” reports Professor Nugent.

Best Example of Ivory Tower Stupidity in the Face of Hairy Death: “If it isn’t trying to kill us, it’s sure trying to scare us.” and “Bigfoot’s not playing games anymore. Maybe next time he won’t be happy just to scare us, so someone’s going to have to start standing guard,” that Einsteinian Nugent again.

Best Way to Re-Kindle the Relationship: Leave the door open for your Sasquatchian lover to come on over to your house so he can prepare a nice flight of shish kebabs, sausage and french-fried face. I think this scene may have inspired the title of a Shania Twain album.

Attention, Drive-In Mutants, this is the greatest Bigfoot flick I’ve witnessed thus far. Absolutely worthy of the top spot in the Top Ten in our ongoing annual quest for Bigfoot.

And, unlike me, who had to watch Night of the Demon on a crappy DVD compilation with ultra-muddy transfer (just look at the screen shots I used) you can check out the Severin Films website where they just released a two-disc Blu-ray edition with a whole lot of other merchandise related to the flick. (A lot of it involves the whangdoodle ripping). Let the Bigfoot binge commence.

For posterity’s sake, here are the Top 10 Bigfoot flick rankings (so far) as we hang our checkered shirts and Yukon hats back up in the closet until next autumn and Sasquatch goes back into hibernation:

1. Night of the Demon

3 (or 10, depending on how forgiving you are). Suburban Sasquatch

We’ll see you next week!