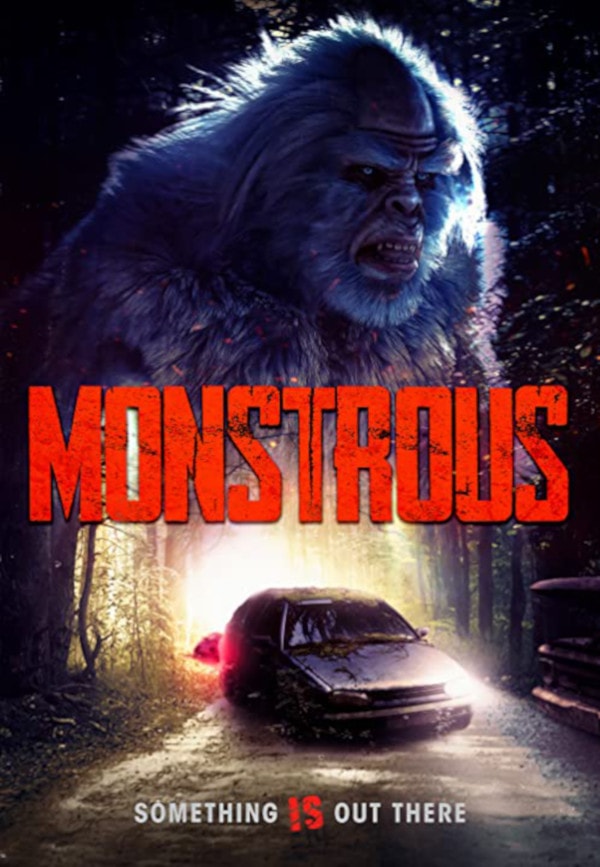 Ben Nagy Reviews ‘Monstrous’: If You Wanna Get Technical, the REAL Monstrous Thing Here is a Lack of Bigfoot

By real popular demand, we're doing the Second Annual Hunt for the Best Bigfoot Movie and the first flick up is 2020’s “Monstrous."

So for our first-ever Joe Bob Facebook poll, in a landslide vote — even more landslide than Reagan vs. Mondale in 1984 — our audience demanded that I check out Bigfoot flicks all this month. We appreciate everyone who responded and those of you who offered some suggestions of flicks as well — regrettably I don’t think I’ll be able to get a physical copy of Sexsquatch or its sequel, Sexsquatch 2: Teen Ape vs. Sexsquatch, in time to add in to this year’s dose of Bigfoot flicks. However, I will keep an eye out for them and some of the other flicks that were suggested in time for November 2022.

And, judging by the response, you folks like getting interactive, so we might do a bit more of that to spice things up as time goes on.

So, if you don’t remember (we’re remodeling Joe Bob’s website, so you might not be able to do a flashback to last year’s crop of Bigfoot Screening Room reviews), I checked out five Bigfoot flicks because there’s not much to do here in between Halloween and Thanksgiving in northern Ohio except wander around the woods, look at the changing leaves, lament the latest dysfunction involving the Cleveland Browns and hunt for Bigfoot.

Last year’s standout flick was Cherokee Creek, where a bunch of guys out in the woods for a bachelor party got mutilated when they teed off a Sasquatch because they were having too much fun. Bigfoot (Bigfeet/Bigfoots?) is/are really territorial and hates/hate the exchange (or dumping) of human bodily fluids in the unsullied wilderness they call home. (I got into the whole grammatical debate last year when I checked out the worst of last year’s lot, Bigfoot! )

And, in looking at those five, some expectations were established. In order for a Bigfoot flick to be eligible for the full four stars, it not only has to have the standard blood and breasts (the beast is pretty self-explanatory here), but Bigfoot has to flip over a vehicle. If it could do it in the 1970s while fighting Lee Majors on broadcast TV in “The Six Million Dollar Man,” then it should be able to do it these days in a feature film. The flick also has to have at least one frame where we see the print of one of Bigfoot’s big feet. Otherwise, they aren’t doing their job right.

Now that all the introductory blah, blah, blah is out of the way, let’s check out this week’s flick, Monstrous, from 2020.

Beginning in Whitehall N.Y., in the Adirondacks, the opening scene has a woman striking what was probably a baby Bigfoot in the road, driving off with a passenger in the car and then getting her eyeball clawed out. The passenger she was with escapes. Then we get the backstory that a whole mess of women have gone missing from the area.

The flick shifts in time three years and geography to Lansing, Mich., where a guy named Jamie (Grant Schumacher) orders take-out Mexican food and wears a University of Michigan hoodie in Lansing in his apartment with bedsheets over the windows instead of curtains when he should be wearing a Michigan State sweater. He says “Squatch” a lot while smoking, watches online videos about Bigfoot and refers to a bunch of newspaper clippings he taped to his wall next to an X-Files poster like any conspiracist worth his salt would do when referring to his (we presume) sister, Dana, who went missing.

He’s visited by his friend with no benefits, Sylvia (Anna Shields, who wrote as well as stars in this one), and talks about this weird plot that he has where he’s going to meet this person named Alex (Rachel Finniger) who rode with Dana to Whitehall after Dana answered an online ad two years ago. Seems Alex posted the ad again.

But Jamie has some bad tacos and can’t do it, so Sylvia decides to impersonate Jamie and go on the 11-hour, 747-mile trip (it’s even shorter if you go through Canada). But since they decide to take a day-and-a-half to drive there, it gives the two ladies the time to start a sexual relationship and the flick had about three mid-1990s-Cinemax-style makeout scenes complete with passionate soundtrack in about a 15-minute span before we get to New York, but only two breasts visible.

If you pay attention to the first scene, you know exactly where this one is going once driver and passenger arrive in New York, so there’s not a ton of mystery about what’s going on plot-wise, rather the big mystery is whether the filmmakers will let us actually SEE the dang Bigfoot kill somebody instead of towering over a cowering victim, then cutting away.  (The first two Sasquatch attacks happen off screen.)

Having lamented that, not wanting to get into too many spoilers and because it’s my gimmick, I still have to do …

Best Curt Alibi to a Lying Lover: “I told the cops, she drove me here, she left. I thought that was the end of it.” — Alex

Best Way to Distract Your Lover From the Dang Bigfoot That She Met Outside: “Let’s go get a drink, we’re not going to sleep tonight.” — Alex

Best Indicator that Your Lover Might Not Be For You: The whole four-minute (in movie time) monologue that Alex gave to Sylvia about shooting her hound dog while deer hunting, and then Sylvia not liking Alex’s videotape collection.

Best Expression of Montezuma’s Revenge: Mere minutes after Jamie calls for his food delivery, it arrives so quickly that the only explanation is that the Taco Loco place he ordered from operates out of the dumpster of his apartment complex. It’s also the best explanation for the acute food poisoning that gets Jamie out of the picture and serves as the inciting action for Sylvia to hook up with Alex.

Best Argument to Invest in an Iridium Satellite Phone: They get some really crappy cell service out there in the Adirondacks and a phone can come in handy when looking for Bigfoot or if you’re getting chased by Bigfoot.

Best Bigfoot Defense System: An electro-magnetic frequency system deer repeller keeps Bigfoot away so that all of the shots of the guy in the Bigfoot suit are really far and hazy for the most part.

Best Advice to Retro Videographers: If you’re gonna only record 21 seconds of something on tape, you don’t have to use SLP, which is Super Long Play and lets you put six hours on a two-hour tape. Instead, you just have to use SP — Standard Play — to record. That way those precious memories of quality times you want to remember will have the best video and audio output.

Best-Behaved Beast: Instead of crashing through a door or window, Mr. Squatch just goes through an open door, wanders into the house and doesn’t destroy anything until he yanks a woman through a window. However, his bedside manner could be improved when letting someone down.

Since this one’s advertised as a Bigfoot flick, has Bigfoot on the cover, and I’m reviewing these flicks because they’re Bigfoot flicks, I gotta warn you that it is NOT the perfect Sasquatch-on-the-rampage flick if that’s what you’re looking for.

It does have blood. It has breasts and it has two beasts; but Monstrous earns just a star and a half because Bigfoot does not flip a vehicle over as required by that one episode of “The Six Million Dollar Man” and the required shot of Bigfoot’s footprint is absent. However, I decided not to deduct an additional half-star because we do get to see Bigfoot’s foot in action in a satisfying resolution.

Check Monstrous out on some channel called Shudder, AMC+, Vudu or on physical media.

Next week, the quest continues…