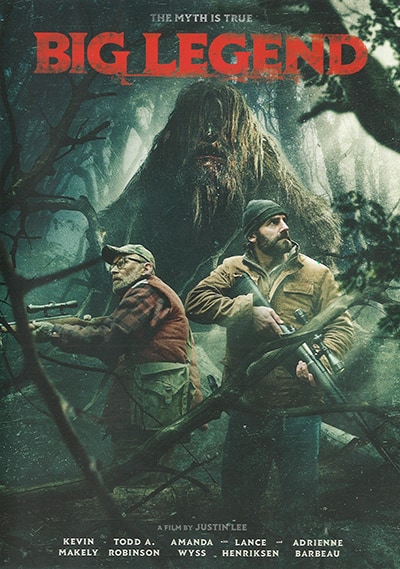 An Army Ranger traipses through the Washington wilderness trying to figure out what the hell happened to his fiancee and gets called "chief" a lot in "Big Legend," which features cameos by two Hubbie Award winners familiar to Mutants everywhere.

And that’s exactly what happens when an Army Ranger loses his fiancee at Mount St. Helens.

It’s autumn, and I want to make up for some lost reviewing time, so not only are you getting reviews of Halloween-type flicks for the last couple of weeks of October, but I’m also starting a series of THEMED reviews in tune with the crisp tinge in the air. Figured I’ve got to step it up to try to make some headway in this stack of approximately 400 flicks sitting around the house as I approach the first anniversary of me reviewing flicks for Joe Bob.

So as the nights lengthen, the other thing (besides watching movies) we can do as the weather and leaves change here up north is don our cold-weather survival gear and a red flannel (Sherpa lining optional). Then we grab a Thermos full of hot cocoa, a bag of granola, a big walking stick and what do we do?

So this week’s flick is Big Legend, which I grabbed off a shelf somewhere.

The setup is this: Bigfoot is hanging out at Mount St. Helens kidnapping fiancées and making Army Rangers go nuts.

Case in point: Tyler the Army Ranger (Kevin Makely) takes his girlfriend, Natalie (Summer Spiro), out on a campout in Gifford Pinchot National Park. He proposes to her in a romantic scene, she accepts, they hike back to their campsite. Nature calls.

Yep. Bigfoot gets P.O.ed cause Tyler had the nerve to pee on his land.

Exit Natalie after their tent gets attacked in the middle in the night while our hero is out investigating the proverbial Noise in the Dark Woods. Back in civilization, Tyler is institutionalized for a year not knowing what happened. He gets better, but has those lingering doubts about her fate.

After his mom (Barbeau) grabs him from the institution and brings him back home, saying that she believes him that something unexplained happened out there and he won’t be at ease until he figures it out. It helps that Tyler goes through the photos and sees a suspicious Bigfoot-looking shape in one of the shots.

So dangit, it’s time to throw on some Carhartt, grab a rifle with a scope on it, put on a backpack and return to the scene of the crime where Bigfoot messes up his truck and he meets a camper named Eli (Todd A. Robinson) who offers him beer and says “chief” a lot.

I mean, he says “chief” A LOT. If you drink every time he says it, I will not be held responsible for your inebriation level.

And for those who like a little blood with their alcohol …

Justin Lee put in the credits that Makely’s and Henriksen’s characters will return in a flick called The Monster Chronicles. Will there be more Bigfeet (and will they be pissed)? Maybe a Mothman or a Chupacabra? We’ll see.

Check it out streaming on Prime Video, TubiTV, Hoopla or Vudu. It’s also out there on DVD if you wanna get physical.