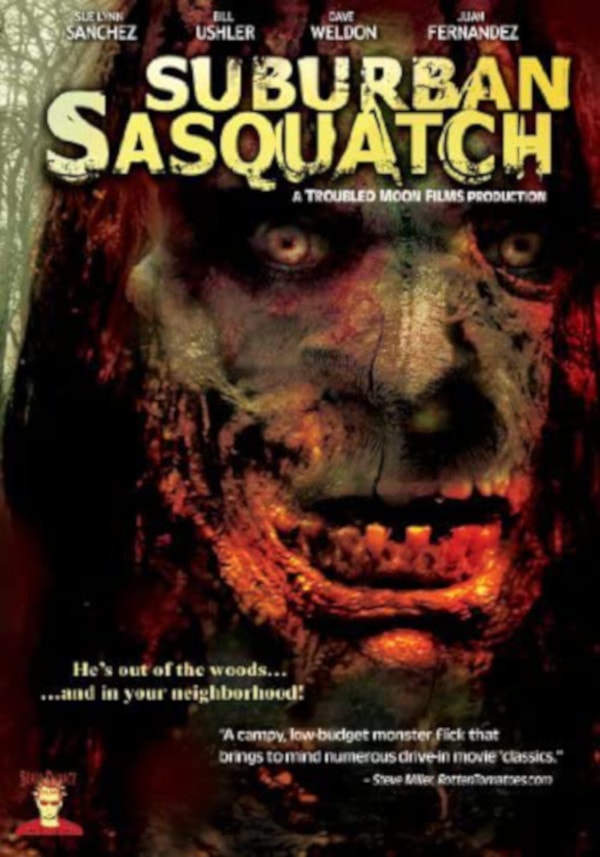 Ben Nagy reviews ‘Suburban Sasquatch’: If You Are Ready to Challenge Your Beliefs in Bigfoot, Only a Select Few Can Stand It

The next two flicks I’m looking at as our Bigfoot Month lumbers on to a chilly conclusion take the big guy out of his natural habitat.

Yep, Sasquatch sometimes is compelled to take a hike from the peace and idyllic tranquility of his forested bower because he needs to remind himself why he stays away from people in the first place.

So, where’s he go? The suburbs, of course.

Unleashed upon an unsuspecting public in 2004 by writer/director Dave Wascavage (who also kills himself as a character twice in this and wore the Bigfoot costume in a few scenes) and his Troubled Moon Productions, you WILL know whether you can handle this mind-altering chunk of shot-on-video cinematic devastation known as Suburban Sasquatch about three minutes in.

It starts out with this guy and girl tooling around in the woods of Woodstown, Pennsylvania (that’s two Pa. Bigfoot flicks in a row if anyone’s keeping track) heading to an isolated party that the girl clearly does not want to attend. She makes this perfectly clear by repeating that sentiment in all six or so lines of halting dialogue she has. Not sure what her problem is because the guy in glasses is driving and all she has to do is look around at the autumn scenery and maybe she had to throw in a buck or two for gas.

But wait. They are being watched from above. A person in a costume that morphs into a superimposed shadow of Bigfoot, potentially equipped with teleportation powers, is observing the passing vehicle from a rise while hidden behind the trees.

Then, the shadow runs across the road multiple times. Or maybe it’s a number of Bigfoot/Bigfoots/Bigfeet all having an SUV-smashing contest and a bunch of them have really crummy timing because they start running down the hill too late, the car keeps moving and the Sasquatch jaywalkers kneecap themselves with the guardrails since they’re unable to stop their momentum going down the embankment.

If that’s the case, at the bottom of the hill, there are no doubt a number of Sasquatches with towns meniscuses and ACLs. A backwoods orthopedist for giant hominids could make a fortune by hanging out in Woodstown.

Eventually, a Bigfoot slows down and times it just right so it crosses in front of the Suzuki Sidekick. The girl thinks it’s not a deer. The guy thinks it’s a deer. They start driving again.

Then the winning Sasquatch saunters out, the driver slams on the brakes and the car gets smashed. There’s the dissonant sound on the soundtrack of tires squealing when they’re not moving in the shot. Bigfoot smashes the driver side window (according to the soundtrack) and throws what looks like popcorn into the Suzuki. The driver somehow is now outside that car and gets an arm ripped off with Microsoft Paint animation subbing as blood before there’s an animated brain smashing. (This is later retroactively rescinded as when he see his corpse later, his skull is uncrushed before the corpse entirely disappears from their crime scene.) The girl is apparently ripped limb from limb judging from the animated bones that are superimposed on the footage. There’s a random shot of a full moon. Then it’s day again. The police arrive, the girl looks like she’s taking a nap and her body shows no signs of damage.

Then Talla (Sue Lynn Sanchez), a Native woman wearing Uggs, is bequeathed a bow and arrow set that some extras used in a 1950s Western flick as a sacred artifact as an old guy clad in a burlap hoodie tells her that she has a sacred quest and will face two battles, but he can’t exactly tell her what the challenges are gonna be even though he saw them in a vision that did not involve Matthew Modine or Linda Fiorentino. Also she’s going to be guided by a superimposed eagle put on some aerial footage.

I don’t want to get too much into the plot, other than Bigfoot is cannibalizing folks because of development encroaching upon its habitat and shoving single moms into his cave so they can be eaten later. Talla and this reporter guy named Rick (Bill Ushler) are trying to stop the killings. And Bigfoot is magic or can hop dimensions because it can disappear and reappear like Joe Bob did in Hogzilla.

Since not everybody is into football and it’s the giving season, I wanted to include a special treat for everybody’s enjoyment, a Suburban Sasquatch Drinking Game I came up with to pass the time this Thanksgiving. (DISCLAIMER: Myself, the JBB website and the Big Guy Himself are not responsible for any actions including, but not limited to, spilled stuffing, cranberry crises, sweet potato pummeling or turkey trauma, as a result of participation in this game over the holiday or any period following publication of the official rules.)

Best Wisdom: When the “Native” elder tells Talla: “Do not take this lightly my child, if you were a true blood, you would.”

Best Summarization of Urban Flight: Given by Police Chief John (Dave Bonavita), “It used to be the further you lived from the city, the safer.”

Best Recovery: The fisherman who gets knocked out by a severed arm thrown by Bigfoot, somehow avoids drowning while floating facedown in the river, stumbles upon the lair where Bigfoot is keeping this woman he dragged off but then doesn’t bother to help her before running off and being found by a cop in an outdoor public restroom.

Best Scene for Pet Lovers to Cover Their Eyes For: What happens to Muffy and her owner.

The quality of Suburban Sasquatch is very similar to a movie I reviewed a while back called Ryan’s Babe. Depending on the viewer’s ability to ignore crummy computer effects, changes in costume design, an absence of continuity, implosions of logic, abrupt transitions, expand their minds past the typical conventions of time and space and, most importantly, avoid giving themselves an aneurysm by taking it seriously, Suburban Sasquatch is on the level of Things, Troll 2 or The Room.

And, more importantly, it has all the elements established as essential to a Bigfoot flick such as a shot of the Bigfoot’s footprint, multiple attacks on motor vehicles and gratuitous stomping.

If you’re of a certain mindset, three and a half stars (mandatory half-star reduction because of no garbonzas). If you’re of another mindset, one star.

Suburban Sasquatch is available to watch for free on TubiTV and in a double-disc edition direct from Wascavage’s Troubled Moon Films.

Special thanks to Joe Bob Facebook followers Brian Baldwin, Dale Stoltzfus and Dustin Basham for suggesting this one when we had the vote on whether I reviewed Bigfoot flicks this month. You maniacs.

Next up: Bigfoot’s stuck in the suburbs again, but this time instead of being hungry, he’s got love on his mind…