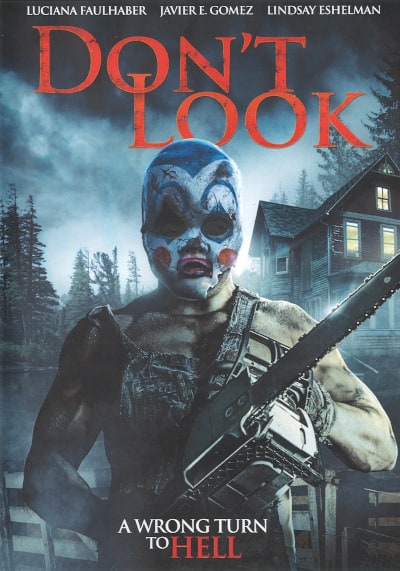 This flick has a misstep in its opening (and maybe in its title, too), but makes up for it as it goes along

Hey, I’m back doing some more reviews after what was an amazing second season of The Last Drive-In where practically ALL of the second features got four stars.  Hope you missed me. If not, that’s OK, because you can still read these reviews and accumulate a great fondness so that when I do go off and do blog entries again and put the Screening Room on pause that you’ll miss me on a weekly basis.

The one thing we don’t want you doing here is HATE reading my reviews, though. That’s what interacting on social media is for.

So it just so happens that it’s the Fourth of July where an act of defiance led to the start of the great nation that invented the drive-in and ipso facto deluxo led to the invention of the Drive-In Totals.  In the spirit of equal parts celebration and defiance, I grabbed a DVD of a movie called Don’t Look right there on the cover.

Well – kind of defeats the purpose, don’t it?

I mean, if you call the movie Don’t Look, there’s a certain percentage of folks that are going to see that and say, “OK. I won’t.” Lose some audience there.

Then there’s a certain percentage of knowledgeable Drive-in Mutants who are going to get confused. Why are they gonna be confused?

So — is this a sequel to the unmade fake-trailer movie called Don’t from Grindhouse?

Or maybe this is a prequel.

Maybe you’ve been doing it all wrong all these years and you might need to watch Don’t Look before you watch the 1970s flicks Don’t Look Now or Don’t Look in the Basement. Or maybe it’s a prequel to Don’t Look Down or Don’t Look Up even though all those were made first because Don’t Look has a shorter title and they almost always put the shorter titles in front when you’re doing a franchise and then keep adding on things like dashes, colons and of course, more words.

You just DON’T KNOW when you pick up a flick like this.

Maybe the audience you’re really looking for is a rebellious cuss who’s going to say: “Well, the DVD cover tells me Don’t Look, but my mom read me The Monster at the End of the Book like 40,000 times between ages three and 16, and I still turned the pages every damn time and I still roam the Earth unhindered in absolute defiance of Grover, so the heck with it, I’m going to watch this flick even though the cover tells me not to.”

I guess that’s the initial target audience. Or it could be people who like guys in masks waving around chainsaws on the cover of the disk. That’s the ticket.

Director Luciana Faulhaber (who also came up with the story and stars in this sucker) starts us out in giallo territory with a sepia-toned flashback as a girl swings out in the backyard singing Silent Night. There are leaves on the trees. She hears a gunshot and goes into her house. There’s a wreath on the door. The sepia tone disappears. She finds her mom dead and her dad next to her dead mother. He tells her “Don’t Look.” We hear another shot. Title card.

Note to filmmakers: A couple things here — at the start of the movie, it’s the start of the movie chronologically.  No need for any sepia tone, especially when it gets ditched about a minute into the flashback. The audience can figure out that it’s a flashback later on in the flick., especially because this is one of those progressive flashbacks like in Deep Red where people have seen a portion of the flashback at the start so when the flashback starts again, they know it’s a flashback. Plus we’ve got Halloween syndrome here as well with leaves on trees in (allegedly) winter in a Northern state (Pennsylvania).  The whole holiday tie-in could have been done away with altogether

After that nitpicky start, we go into standard spam-at-a-wilderness-property mode. Five young adults — Lorena (Faulhaber); Nicole (Lindsay Eshelman); Sebastian (Javier E. Gomez); Alex (Curtis K. Case) and Ted (Jeff Berg) are going to Nicole’s old farm for a holiday celebration of sorts. It’s the classic setup of urban folks who are somewhere they shouldn’t be versus rural folks who don’t want them there. (See the When Rednecks Saved Hollywood show by a certain somebody for more details on this well-worn theme.)

The educated folk gawk at a bisected pig that is hanging out in this open shed but isn’t attracting flies, then run afoul of Kelley (Jarrod Robbins) and Sherri Baby (Hailey Heisick), some tenants who live in a cabin on the farm property and cut up animals.

Then things start getting NASTY with all three B’s checked off. Chainsaw deaths, decapitation, an ax fight, guts exiting torsos, bodies getting pierced AND forbidden redneck sexual practices. After the opening stumble, Don’t Look gets things rolling in the way a discerning drive-in audience expects, nay, demands in a brisk hour and about 10 minutes or so.

Maybe if they do make Don’t, they can get that hulking, lurking creepo in Don’t Look who’s been roaming his family farm for 10 years and wearing a Baby Huey mask to make a cameo. After all, this flick’s ending left it wide open for a sequel to the possible prequel.

Check it out for free on Tubi TV, rent it or buy it online and it’s also out there on DVD from our pals at Wild Eye Releasing.