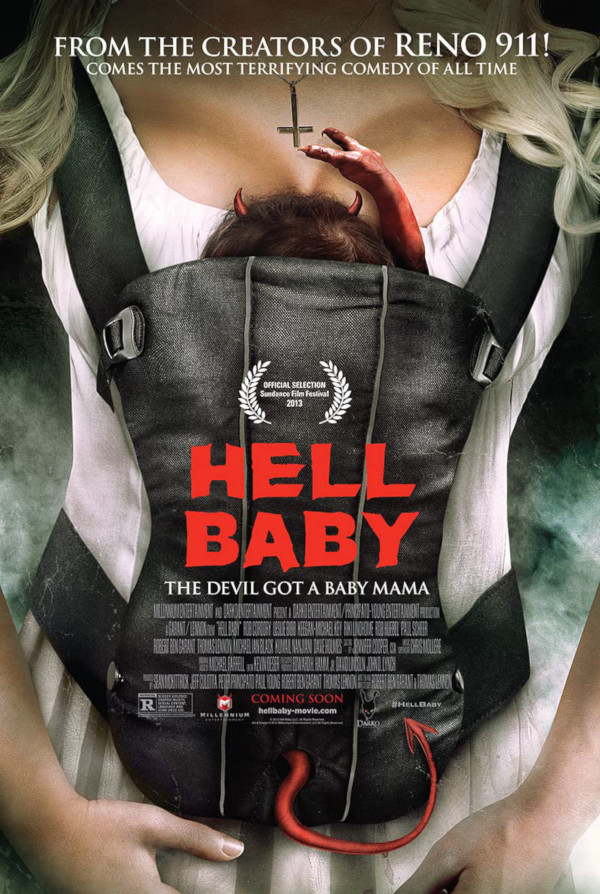 You know, if the folks who did The Omen back in the 1970s had the mindset of folks today, they could have had themselves a stealth Satanic franchise linking two of the three greatest Catholic horror flicks ever made had they tacked on one tiny scene, maybe two lines of dialogue, at the front of the flick.

Would have been as simple as putting a little scene right at the start where the nurses get to talking about a redheaded woman with a pixie cut leaving a baby at the hospital where Gregory Peck and Lee Remick are hanging out and then editing all that stuff about dingo moms out. Wouldn’t have even had to mention Rosemary by name to avoid any bad blood between Paramount and 20th Century Fox. Also, it’s not like it really was a mystery that Damien was Satan’s kid anyway when you get down to it. It was to the characters in the flick, but every movie poster had the “666” in the logo and since it was the 1970s and there were amateur numerologists coming out of the disco woodwork, well, there wasn’t anything to spoil — only whether Gregory Peck made it or not.

Obviously this crossover didn’t quite happen, but if you do a few mental gymnastics, it’s possible. Like a kitten, Rosemary’s Baby’s eyes could have changed color from monster yellow to Damien hues. I think we can all agree that The Omen would have been A LOT better sequel to that direct-to-TV Look What’s Happened to Rosemary’s Baby. Heck, the Omen parody skit they did on early “SNL” with John Belushi as Damien on Chevy Chase’s last episode as a cast member would have been a better sequel.

Anyway, I go into all this because you can check out Joe Bob showing The Omen on MonsterVision on the Patreon as well as his commentary on both Rosemary flicks. Plus it’s the new year and cartoonists are always drawing pictures of Baby New Year kicking the old, grizzled bearded guy who represents last year in the behind with the old guy saying “Man, I’m tired!” or “Good luck, kid!” or some variant. And since this year is just a baby, we should kick the old year out on its hiney the way we know best — with a Satanic infant flick.

Now if you go into Hell Baby expecting it to be like It’s Alive where the baby comes out a half-hour into the flick and then starts ripping out people’s throats with its teeth and claws before the National Guard comes in with harpoons and automatic weapons to stop the massacre, you’re going to be disappointed. The whole flick builds up to the hour and 20 mark when Hell Baby is born and then goes on a bloody rampage. Until then, there’s some satire on gentrification, race relations and police procedures, a gag about biker shorts, a commentary on the pharmaceutical industry, plus the occasional supernatural intrusions, a great Evil Dead-style demonic possession scene, roundtable vomiting and one evisceration as the mom-to-be gets more evil as the birth approaches. Let’s also not forget two raunchy stops at a New Orleans sandwich shop that will make you want to go get a po’boy next time you’re in the Big Easy.

If you watched Comedy Central anytime in the last couple of decades, a lot of familiar faces are in this one – the directors are Thomas Lennon and Robert Ben Garant, two of the brains who produced the long-running “Cops” reality TV send-up “Reno 911!,” or, if you’re of a certain age and remember back that far, MTV’s comedy show “The State,” which spun off from the comedy collective they were involved with in the 1990s. Keegan-Patrick Key is in it as well as Michael Ian Black in a cameo and let’s not forget Rob Corddry, who was a mainstay on “The Daily Show.”

So anyway, Jack (Corddry) and his expectant wife Vanessa (Leslie Bibb) Watson are some HGTV-inspired opportunists who buy the world’s most Satanic house in a run-down New Orleans neighborhood. They’re instantaneously welcomed by F’resnel (Key) who tells em they just bought the place that’s known by folks in the neighborhood as the “House of Blood,” “The Place Where the Dead Never Rest,” “House of the Lost” or “The Spooky Old House Down the Way,” but he cheerfully informs them that nobody’s been murdered in the place for a long time, i.e., not in the most recent calendar year.

Once moved in, seems like the house possesses one of Vanessa’s unborn twins and Vanessa herself, making her a source of unholy evil where she eats raw meat straight out of the fridge, disregards all Surgeon General warnings when it comes to abstaining from risky behaviors while pregnant, tries to off Jack and develops an affinity with the Satanic Rottweiler phantom dog that’s roaming around in the neighborhood.

There’s hope though — the Vatican had heard about the craziness and calls in two chain-smoking, Oakley-wearing priests (Garant and Lennon) who probably went to the same seminary and follow the same fitness regimen as Father Guido Sarducci. Having survived their own personal brushes with death and reeling after a brutal impaling of one of their brethren with a radio station swag umbrella while responding to a case of demonic possession, they have their own reasons to hook up with two local cops to fight evil. Succinctly, as Father Padrigo (Lennon) puts it, “The Devil is a dick.”

Best Equivalency: Jack explains to Vanessa that the house’s being tagged by the MS13 gang adds authenticity and character — “It’s like Banksy. You know how much you like Banksy,” Jack says.

Best Way to Ruin a Manicure: In the first sign of her possession, Vanessa scrub brushes her fingernails till they bleed and then licks the blood.

Best Barrier to a Backyard Burial: Jack remembers that you have to call the city before you dig so you do not hit underground lines.

Best Medical Advice: The cable guy who got roped into the house-cleansing ritual started by Vanessa’s sister suggests Jack gets some Bactine to put on the gaping wounds his wife caused when he tried to get her to join the ceremony.

Best Meal to Have Before Engaging in a Fight With the Evil Spawn of the Devil: Zapp’s chips, jalapeño Tabasco and a po’boy from Domilise’s.

Best Reason to Revoke His NPR Membership: Vanessa admonishes her husband at one point when he expresses home defense concerns — “That’s smart, Jack, move into the ghetto and bring in another gun. You should have your NPR tote bag taken away for comments like that.”

Best Wildly Inappropriate Interaction Between In-Laws: That scene where Vanessa’s sister Marjorie (Riki Lindholm) gets oiled up with octopus placenta and shows her garbonzas for like five minutes while both she and Jack are in the bathroom together.

To note, I watched the unrated version of the flick, so in addition to the blood and the beast baby, there were two pairs of garbonzas and a scene with Rob Corddry’s bew-tocks. Other versions might not have these elements that, as decreed by the immutable rules set forth decades ago for drive-in flicks, are VERY essential to the story.

Hell Baby is available on a ton of streaming services including Tubi, Amazon Prime, Hulu, Roku Channel and on physical media.