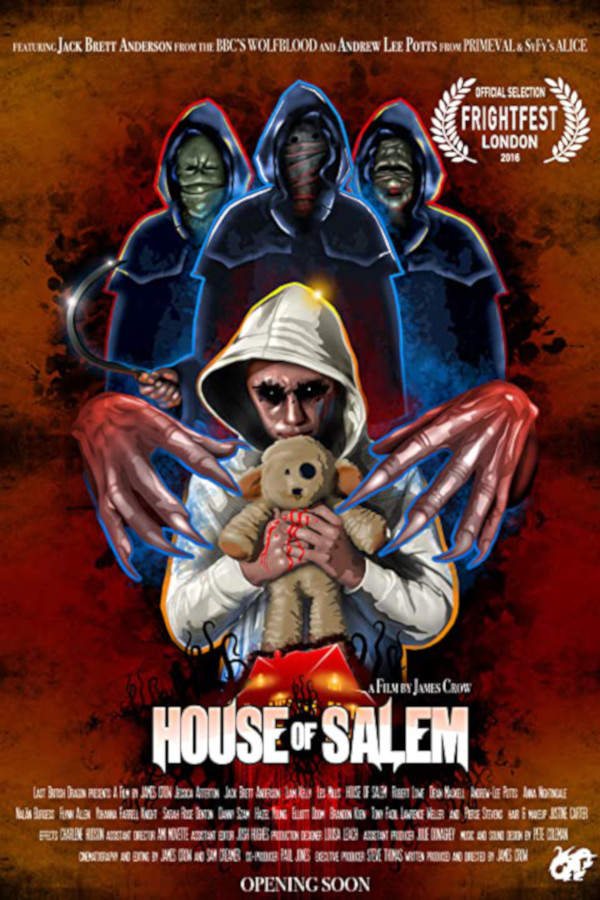 Ben Nagy reviews ‘House of Salem’: U.K. Satanists into sickles, sheep and sensory deprivation (not necessarily in that order)

There’s no way I can top Joe Bob’s rant about Satanism and the Devil that he unleashed when The Last Drive-In showed House of the Devil during Season Uno, so I’m just going to leave this link right here (courtesy of our good friends at Shudder) so that everybody can refresh their memories about how Mr. Flies, Lord O’the, aka the heinous Source of All Evil, has had a comeback in recent years in many areas of media.

This week’s flick, 2016’s House of Salem, reminds us that Satanism isn’t just for the States as writer/director James Crow assembles a clan of Brits who trend toward the pastoral, don animal masks, wield sickles in a threatening manner, paint crude depictions of evil cat eyes all over the woods of Kent, England, and, horror of all horrors, still use VHS to record their torture rituals even when smartphones provide superior resolution and ease of sharing their compositions.

If you can’t tell already, the limey Luciferians in this movie have a rather unfocused agenda and really needed to get back to basics.

Your run-of-the-mill movie Satanists from the 1970s were dependable and predictable:

Once in a while, the 1970s Satanists would be assigned to do their darnedest to make sure the Antichrist had a wholesome upbringing a la Rosemary’s Baby and its sequels or The Omen and its sequels. Satan was too busy for parental duties since, after all, it was the 1970s and he was too busy catching the Saturday Night Fever in his sweet butterfly-collared disco duds (check out YouTube and look for an old episode of “The Joker’s Wild” if you don’t believe me). As long as the Spawn of All That is Evil had enough Tang and Chef Boyardee and an evil canine protector, the inevitable Reign of Darkness to be brought about upon maturation would likely go OK as long as the Satanists knew their role.

Yes, it’s been seen before, and the Satanists of the 1970s could be derided as cliched, but with dependability and predictability came focus: “Hail Satan” meant “Hail Satan.” Anything less mucked up the entire web of Evil and any plans to worldly dominate. That’s why just about every Satan movie from the 1970s had a downer ending.

But decades later, perhaps as an indicator of how things have become more fragmented and scattershot in tune with the Internet Age, the Satanists in House of Salem not only have to hire independent criminal contractors in clown masks to do their dirty work, they really have an unfocused agenda. This likely stems from the fact that the head Satanist chairman has to tell this whole story about how the founder of this particular Satanic sect was just too Satanic for all the other Satanists over in the colonies in Salem (Massachusetts, we assume), so they had to relocate and recharter their sect in the U.K. after leaving the United States, then create an exact replica of their New World House of Salem headquarters, right down to the ornate red carpets.

Trouble is, they either didn’t file the correct paperwork necessary to satisfy the requirements of Hell’s bureaucracy or didn’t bother reading the guidelines. So we’ve got one part of the sect that runs around with handheld farm implements slitting people’s throats in the woods off screen with zero ceremony and then doing interpretive dance numbers. Then we’ve got another subset of the sect that’s obsessed with tossing people into boxes (but very considerately because they give em flashlights and don’t tie em up) in some kind of sensory deprivation experiment that’s supposed to open a portal to Hell inside the box, presumably so that filing the proper forms can be expedited because Hell’s Wifi sucks.

But then there’s also this revenue acquisition subgroup where the main source of income is to tie up kidnapped orphans after ransoming them and making the orphans read statements saying that they acquiesce into becoming sacrifices to help Satan meet his quota of adding to his plush lamb collection.

It’s really very confusing where you go from appeasing and pledging fealty to the Lord of Darkness in the 1970s to hiring four blokes and a girl to abduct a child who already has two members of your sect as his foster parents in the 2010s. I’m sure it’s written in Article 66.6 of the House of Salem sect handbook exactly how to prevent such missteps, but it’s pretty evident that these Satanists didn’t know what they were doing or were given bad info, because all the people they sacrificed and video recorded end up getting resurrected at the end of the flick, the ransom never gets paid and they probably still have to make payments on all the rugs they had to either re-import or to re-purchase to furnish the U.K.’s House of Salem.

The kid at the center of all these evil shenanigans is Josh Downing (Liam Kelly), a teen who drags around and talks to a stuffed lamb named St. Peter. He has to take sleeping pills and other meds, has rough nightmares about nature cultists who cavort in the woods and dress up like animals, and he doesn’t take his pills. A bunch of intruders are in the house and he hears a voice warning him that there are people in the house. He hides under the bed and is found. He also is a pretty crummy drawer.

The four guys and a girl in clown masks who kidnap Josh knock out his poor babysitter, Tania. The kid gets shoved in a car trunk while wearing his pure-white one-piece jammies, and these criminals take him to the pre-arranged safe house (the aforementioned House of Salem) to ransom him. As if the kid hasn’t had enough hardship already — he was orphaned by a house fire, lives with his aunt and uncle who don’t like him, sees dead people, has clairvoyance, is guided by voices and, when all else fails, gets help from his phantom dead brother who got fried in the fire. But now he’s in the clutches of these mean, tactless British criminal who shout a lot.

The big, bad leader of the kidnappers, Jacob (Les Mills) threatens Josh. Then they decide to give him a lollypop. Then they shoot a ransom video. Anna/Nancy (Jessica Arterton) is the only one who’s nice to the kid, letting him have his hands loose while chained to the bed. The box of rocks kidnappers don’t wear their masks, so of course Josh eventually sees their faces and that makes em even madder.

But that’s nothing compared to the consternation caused when the Satanists who’ve contracted the kidnappers start to mess with them by hanging dead rabbits with amputated feet on trees outside their safe house, surround the place, cut off the landline and do interpretive dance routines in cloaks while brandishing sickles and painting messages like “The Devil Wants to Play” in red paint on the windows.

It’s at that point that the kidnappers realize that the Satanists probably aren’t gonna pay em and so some of them get killed off screen before we get to the big sacrificial finale when a fat guy in a top hat emerges from a wooden crate that’s become a portal to Hell and a bunch of dead zombie kids start humming the theme to “Green Acres” while someone named the head deliverer gets to wear a really cool-looking Devil mask.

Best Able to Display Empathy: Girl kidnapper Anna/Nancy says to the woozy Tanya (Nalan Burges), who is bleeding from her mouth: “They don’t pay you enough for this, you’re just the babysitter. Help will be here soon.” Spoiler alert: Help doesn’t come.

Best Able to Be a Big Meanie: Head kidnapper Jacob Coleman (Les Mills): “I gave our clients a good insurance policy. If you try to nick anything, I’ll chop your cocks off.” “You’re going to do everything the scary clowns tell you to, aren’t you Josh?” and “No one can hear you scream here, kid. You’re not going to give me a clown headache are you?” “They’ll pay, I’ve got a guarantee on it.” “We don’t know who this client is, so we don’t want to piss him off” and “Time to put Jack in the box.”

Best Path to Becoming a Criminal IT Professional: Jack (Jack Brett Anderson) the “computer hacker” rose to his prestigious status by having the ability to upload video at Internet cafes but is befuddled by the challenge of finding something that’ll play the horde of VHS tapes (likely PAL format since it IS Britain.)

Best Get Some Woolite: Mrs. Downing (Anna Nightengale) laments an impulsive rifle shot to the head of a character by saying, “Now I’ll never get that out of the carpet.”

Best Branding: If there’s one thing the House of Salem Satanists got right, it’s consistent use of their evil cat eye logo. It’s on crates, trees, windows, VCRs and tattooed on Josh. You can’t have a chosen young pawn targeted by evil without a sinister marking on his or her person. And they get the hooded cloak wardrobe part correct.

To see an example of how not to run a successful Satanic sect, this flick is the blueprint. A star and a half, and that’s if you are really into creepy kid/Satanic possession and British accents.

House of Salem is available to stream for free on Vudu, TubiTV and IMDbTV. A DVD is available as well. Check it out!