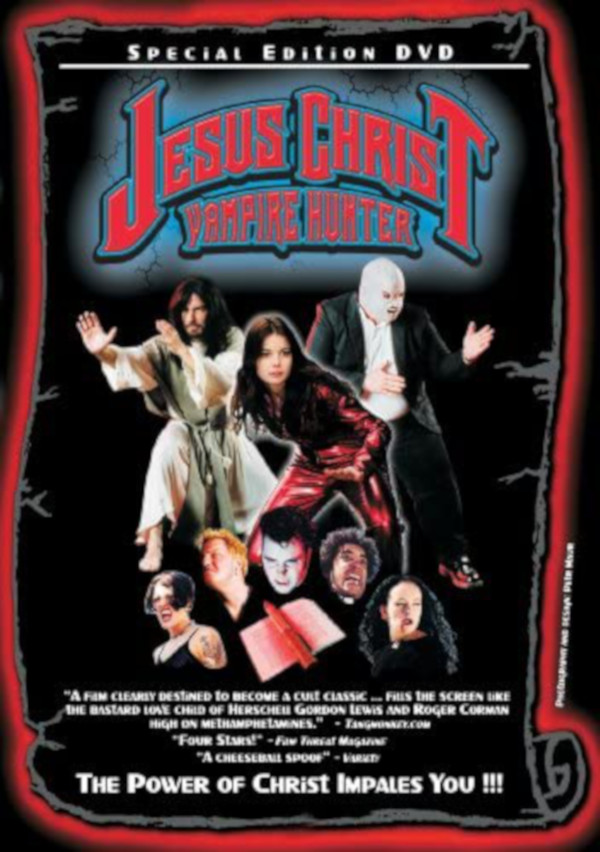 After the disappointment I felt from the last flick I reviewed in which an Easter Bunny-headed killer was supposed to chain-saw people and collect eyeballs of his victims in the basket he was carrying, (if the dang DVD cover hadn’t been LYING to me), there was a gaping maw, nay, a yearning for something inside me.

It wasn’t a fresh 12-pack of Mr. Pibb (which is the only Coke Mayor MacReady likes).

It wasn’t a big bag of Santina’s tortilla chips with a jar of queso and jalapeños on the side.

It wasn’t the plush Joe Bob or the plush Darcy that it’s looking like Fright Rags is going to be releasing and who are going to have LOTS of fun hanging out with the plush Chili Bandit that my daughter already has.

Nope. In these dark times, it was necessary to achieve a religious experience of sorts. This was an abyss in the drive-in soul that had been created by a cosmic confluence catching me in a tailspin. I needed to get in tune with the higher power (not Vince McMahon if you’re as old as me and remember 1990s pro wrestling).

I had to seek my own REDEMPTION.

It’s all good and it’s all right.

Even before I hit play on this flick, I was being cheerily reassured by a band called the Hammerheads that I was indeed on my path to healing. My soul had begun to calm simply by inserting the disk into the tray and letting the menu cycle. Yes, I had been wounded by the prior movie I had reviewed, but the power of Christ was gonna compel me into a Great White North where all the lesbians were facing the distinct possibility of being turned into vampires and being subjected to deviant medical experiments that made them immune to the normally fatal ravages of sunlight upon their pale and blood-starved countenances.

And in such a world, only the Son of God himself can save the day.

We’re talking about Jesus Christ, Vampire Hunter, and it is the perfect flick to watch if you want to get into the true meaning of Easter. And before you say, “Hey, wait a minute. Abraham Lincoln hunted vampires. There was a movie about it!” You’re right. But Jesus’s movie (2001) came out before Abraham Lincoln’s did, and Jesus’s movie was not indoor bullstuff with a ginormous advertising budget.

Ian Driscoll wrote and Lee Demarbre, who co-owns the Mayfair Theater in Ottawa these days, directed this Canadian import, which is the greatest thing to come out of Ottawa since Tom Green. You can watch this one as a second feature after The Passion of the Christ or after The Last Temptation of Christ. The continuity lines up.

Basically, Jesus (Phil Caracas) is hanging out baptizing people in Lake Ontario when a priest with a purple mohawk and another priest come to warn him about a potentially catastrophic threat as a number of vampires are attacking other women. But three vampires (did I mention they’re immune to sunlight?) ambush them and before Jesus can kung-fu all of them, the two priests get their throats ripped out and the lead vampire gets away while Jesus dispatches the other two.

Now, you might be asking yourself why Jesus is killing vampires when there is that whole “Thou shalt not kill” thing going on in the commandments and I was not a theology major, but since vampires’ souls have fled their bodies — that’s the whole thing why they don’t have reflections in the mirror — then Jesus is just releasing their mortal vessels back to the Earth and so he’s not really killing the vampires.

You can email in or tweet at me if you think I’m off base there.

So Jesus takes the motor scooter that the priests had ridden al the way out to the lake back into town and is so bummed out by the deaths of the two loyal priests that he decides to get a makeover in penance and so he goes from long hair, beard and sandals to looking sort of like later-stage Freddie Mercury with earrings and no mustache or Sacha Baron Cohen — take your pick.

Jesus gets another makeover later on in the flick and another style upgrade instead of robes and vestment-looking threads, and this is in response to a nasty throwdown in a park with some atheists and Satanists where Jesus had to kung-fu like 31 people who came after him because Jesus still looked too holy.

While he does not have a full contingent of apostles to posse up and assist, Mary Magnum (Maria Moulton) is there to help Jesus figure out the evil plot of the vampires, who are led by Johnny Golgotha (writer Driscoll), Dr. Praetorius (Josh Grace)  and lead vampire woman Maxine Schreck (Murielle Varhelyi).

Jesus does get some divine help, though. Mother Mary gives some counsel through a light-up statue and his dad appears as a bowls of ice cream (two scoops — looks like strawberry or cherry swirl). He also hooks up with El Santos (Jeff Moffet) — he wears the mask of the famous luchadore El Santo, who, as Mutants are well aware, had great expertise in fighting vampire women — but this guy is big enough to count as two of the famous Mexican wrestler so he’s singularly plural.

Will Jesus win? Will there be poignant callbacks to familiar New Testament passages such as the Good Samaritan and the betrayal by Judas? Will vampires be dispatched in new and different ways?

(Spoiler alert: The answer’s yes — Joseph was a carpenter.)

Best Motivation: A guy with an impressive black beard, listed in the cast as The Narrator, (Ivan Freud) shows up periodically and narrates by yelling at us about how much we should be repenting right now.

Best Listen to the Guy Who Said It: Jesus says, “I think you both better go back to Sunday school. My death wasn’t the end of the story,” and “It’s the message that’s important, not the messenger.”

Best Musical Interlude: A guy with bad teeth dressed up like a Blues Brother does a scat act at a club.

Best Vampire Barfight Ever: When Jesus gets up on the stage and does a scat act with a jazz band after the Blues Brother guy, he realizes that everybody in the bar except him, El Santos, Mary Magnum and El Santos’ girlfriend and the band are vampires. What follows is a creative sequence of undead dispatching via drum sticks, pool cues, toothpicks, crutches, darts, a plunger and a chair, to name a few. About 19 of the bloodsuckers get punctured.

Best Prep for a Vampire Barfight: Jesus eats shawarma with extra garlic sauce so he is able to fry a vampire with his breath.

Best 1980s Movie Homage: They try to do the Jennifer Jason Leigh taffy-pull scene from The Hitcher during the climatic junkyard fight scene with a couple of four-cylinder compacts.

Four stars. Even though there are no garbonzas, which would result in a half-star deduction for a less-pious flick, their absence is counteracted by the religious nature of the proceedings. Also, my daughter enjoyed the soundtrack, which reminds me of 1980s party rock that sounds like it ought to be playing in the background of Teen Wolf, and her opinion counts for a lot around these parts.

My daughter also asked me if God would be mad about this movie and I told her probably not, because an all-powerful deity probably could have messed up the distribution and made sure it never got released or caused some production problems. So, I told her, since that didn’t happen and the movie got made and we got to see it, then God was most likely OK with it.

Check it out streaming on TubiTV, Plex or on physical media.

I’ll have one more Easter-related review for you all coming down the pike or hopping down the bunny trail, whatever your preference may be…